Monash University and the Australia Federal Police (AFP) have joined forces to launch a new initiative designed to help officers scan through thousands of confronting images and files faster with lower levels of emotional distress.

Monash University and the Australia Federal Police (AFP) have joined forces to launch a new initiative designed to help officers scan through thousands of confronting images and files faster with lower levels of emotional distress.

This Australian-first Lab, supported by $2.5 million in funding, is part of the new Monash Data Futures initiative that will train and empower the next generation of scientists to use artificial intelligence and data science for social good.

Researchers from the University's Faculty of Information Technology have worked with the AFP to develop a specialised machine learning algorithm to identify and classify content on seized devices, such as mobile phones and computers, before going to investigators for review.

While the initial focus has been on child exploitation material, over time the software will also be rolled out to cover content from terrorism cases that can cause significant psychological distress for investigators. "The ultimate goal of this initiative is to ethically research the use of machine learning and data analytics in advancing law enforcement and community safety," AiLECS lab co-director and Federal Agent, Dr Janis Dalins, said.

"The automated detection of abhorrent material enhances workplace safety, by going some way towards reducing the incidental and inadvertent exposure to such material by law enforcement practitioners."

The AFP will also make real-world data available to researchers via the world-first 'Data Airlock' – a system that will enable researchers globally to develop and test machine learning algorithms without being exposure to the confronting data. 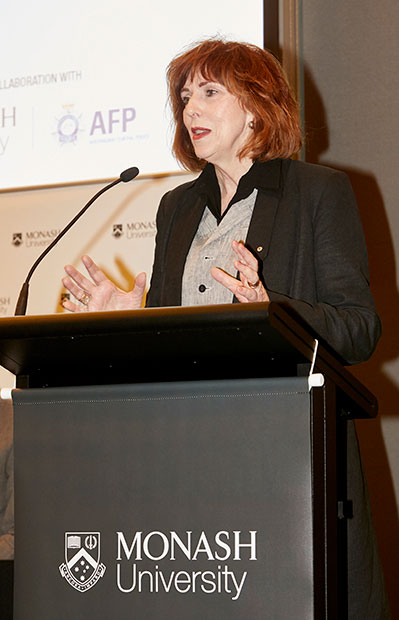 The Data Airlock was built in partnership with CSIRO's Data61 and is hosted at Monash University.

"Collectively, this will make the process of copying, automatically reviewing, and making the data available to investigators quicker than existing procedures," Dr Campbell Wilson, Associate Dean (International) in the Faculty of Information Technology at Monash University and AiLECS lab co-director, said.

"What machine learning algorithms do is give us speed and portability – think hundreds of images per second. But machine learning won't outperform the accuracy of experienced human investigators, which are essential to each case."

AFP Commissioner Andrew Colvin said the AiLECS lab would support the agency's vision – policing for a safer Australia – in multiple and significant ways.

"This is a ground-breaking initiative from Monash University and the AFP that will vastly increase the speed and volume at which police can identify and classify child exploitation material and other distressing content," Commissioner Colvin said.

"In turn, more people will be held accountable for these abhorrent crimes and, just as importantly, we can better safeguard the wellbeing of both AFP officers and the community we are here to serve."

Professor Jon Whittle, Dean of the Faculty of Information Technology at Monash University, said the ethos of AiLECS was based around local and international collaboration, research translation and community impact.

"The work of this Lab draws on expertise beyond computer science and AI, such as law and criminology, so as to contribute to community safety worldwide. International partnerships are already developing with significant interest being expressed from government, industry and academia," Professor Whittle said.

"We're delighted to be working with the AFP on this important initiative."

Professor Margaret Gardner AO, Vice Chancellor of Monash University, said: "The potential for data science and artificial intelligence to create sustainable, societal and economic impact is unlimited. As a University, Monash recognises the critical role it plays in the advancement and application of these technologies to create transformative and lasting change."

Professor Jordan Nash, Dean of the Faculty of Science at Monash University, said the AiLECS Lab is just one example of how Monash Data Futures will power the University's work in data science and AI.

"Co-led by the Faculties of Information Technology and Science, but operating as a University-level institute, Monash Data Futures brings together data science and AI capabilities across the University, creating a blended physical, digital and virtual ecosystem for collaborative research, industry engagement and innovative education," Professor Nash said.