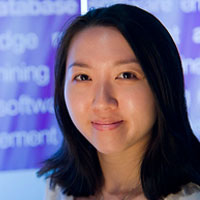 Originally from Malaysia, Janet quickly settled in Melbourne to undertake her tertiary studies.

Studying at Monash was different from what I had experienced before, and very exciting. It was a whole new way of learning which I adapted to fairly quickly. I enjoyed studying independently, as it allowed me to set my own standards when working on assignments.

The honours degree not only introduced me to a new and fascinating world of research, but has convinced me to continue towards a PhD in the near future.