The software engineering (SE) workforce is dominated by male employees, potentially caused by job advertisements being biased towards men.

SE job ads are often checked for potential gender bias using word-based bias detection tools, however, these do not take SE specific words into consideration. For example, 'analyst' is considered male by the word-based tools, therefore any SE analyst position would be incorrectly identified as biased toward men.

In this project we present a more nuanced mechanism to check for gender bias in SE job advertisements by building on the GenderMag method.

Proven successful, GenderMag identifies five dimensions of problem-solving (referred to as facets) on which men and women software users differ.

From a survey of software practitioners, we identified factors where male and female SE job applicants differ. We grouped the similar factors together and derived three facets that were important to predict job application behaviour of SE job applicants. We validated these facets with some SE candidates and used them to develop 'new' Tim and Abi personas from the facets and evaluated four SE job advertisements. We identified gender related biases in two of these. 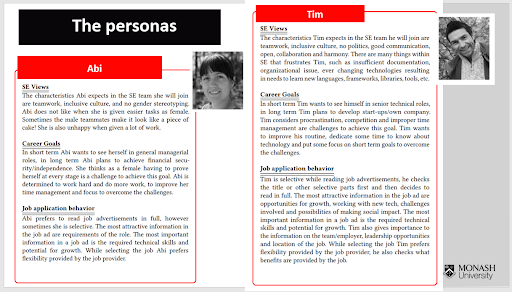