A few weeks into my internship here at the Louisiana Crisis Assistance Centre (LCAC) in New Orleans, attorney Richard Bourke, fellow intern Carmella Quimbo and I made a visit to Parchman prison (Mississippi’s state penitentiary). For want of a better description, it was a very surreal experience.

Upon arriving however I was surprised by how seemingly ‘normal’ the prison was, and so very different from what I had imagined. Firstly, Parchman is far from fortress like, it more readily resembles a large plantation. The prison and its grounds take up about 16 000 hectares, and the prison even has its own post code. Once you have been let through the front security gate, you proceed down what is the main avenue of Parchman. However, the razor wire, prison blocks, guards and prisoners are strangely absent. The avenue is lined with sweet, symmetrical, white weatherboard houses, garnished with a seemingly endless supply of Christmas decorations and flashing reindeer. Many of the guards, prison officials and their families actually live on the prison grounds. Abruptly after this wistful stream of suburban bliss, one becomes irrevocably aware of the presence of the old brick death house, which still houses the gas chamber where Edward Earl Johnson was executed. It is at this stage of the journey that the harsh realities of Parchman come crashing down around you.

The flat, sparse landscape is punctuated with flat isolated compounds surrounded by razor wire. The level of security is imposing and even a little intimidating, yet also strangely antiquated: almost medieval in some instances. For example, in one of the buildings where Richard and I visited an inmate we encountered a guard stationed atop an enormous tower, who proceeded to demand who we were and what our purpose was. After shouting back our purpose, she lowered down a bucket from the tower, on a rope and loudly instructed us to place our keys in the bucket. After complying with her request, a series of mechanised gates slowly opened. As Richard and I made our way across to the front gate we tried not to appear alarmed by the wooden signs posted on the grass, alongside the concrete path stating ‘gun line’ do not cross. I got the impression that they did not get a lot of visitors.

Speckled around the farm, inmates are performing manual labour, in striped pants I thought only survived in films.

Inmates at Parchman, unlike their counterparts in the Louisiana State Penitentiary receive no recompense for their labour. They also get very little say over the work that they perform. One of our clients, formerly on death row (and currently serving a lesser charge), now delivers food trays to death row inmates.

Parchman’s only redeeming feature is the strength, spirit and tenacity of the people there and their capacity to survive and function in such adversity. 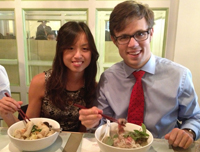