The One and Only: a Tribute to Louis Waller 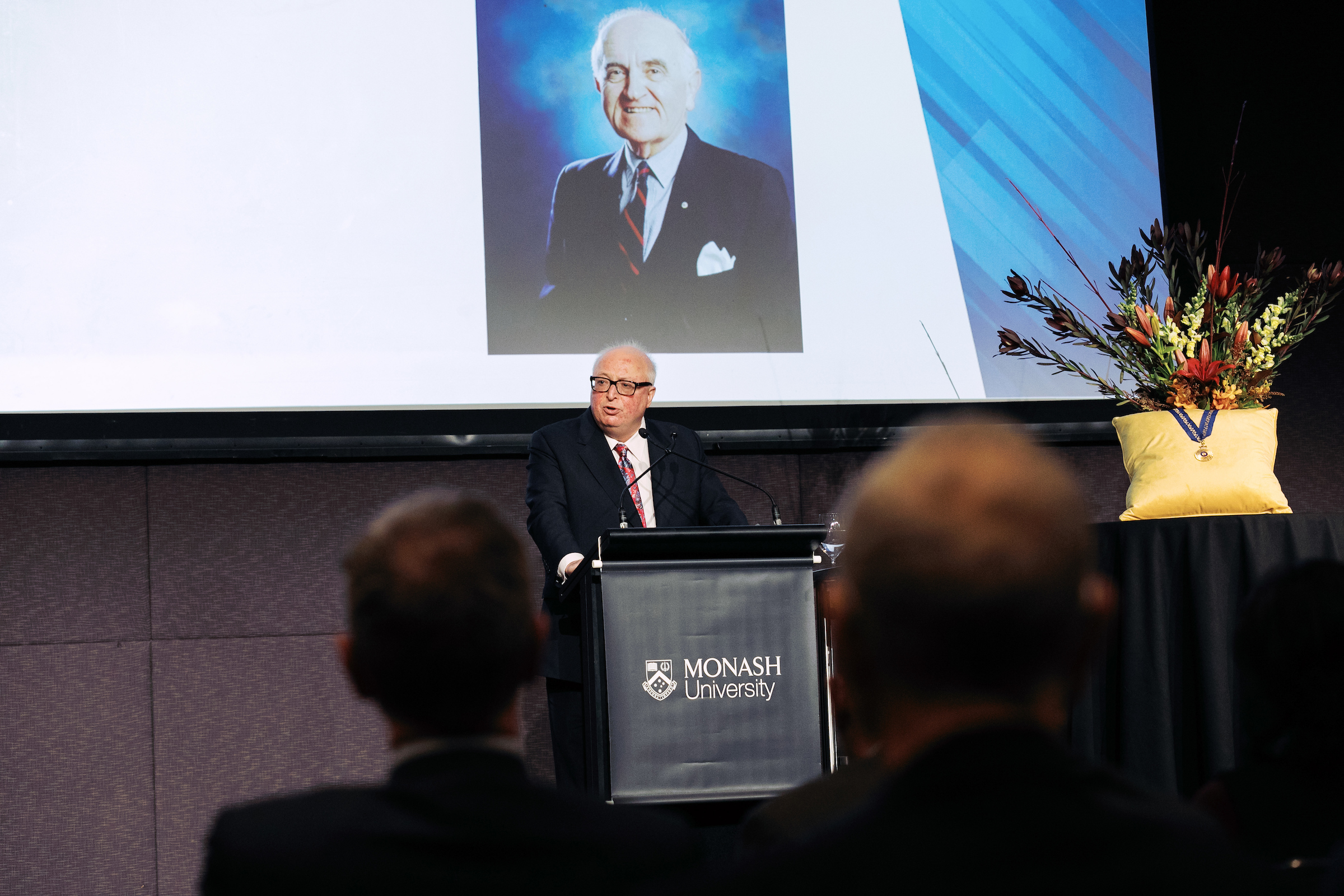 Professor Bryan Horrigan, Dean of the Faculty of Law, pays tribute to Emeritus Professor Louis Waller AO. This is an edited version of a speech delivered at a tribute event dedicated to Professor Waller in June 2022.

I would like to pay my respects to Louis Waller’s family, including his wife Wendy, Anthony, Ian, Elly and Jacob Waller, Louis’ grandson, who was the winner of the Supreme Court Exhibition Prize whilst he was a student with us.

Louis always smiled and beamed with grandfatherly pride at events where we recognised Jacob’s excellence, when instead of mentioning that Jacob was ‘Louis Waller’s grandson’, I introduced Louis as ‘Jacob Waller’s grandfather’.

Louis is very much present with us tonight. He spoke in this very room at our public Faculty dinner for alumni and the profession in 2018, as the keynoter speaker celebrating the work and growth of Monash Law Clinics under our ground-breaking and first-in-Australia Clinical Guarantee.

Tonight, I have the privilege of paying tribute to Professor Louis Waller AO.

In doing so, at the outset, I want to acknowledge publicly, and in your presence, Wendy, the unwavering, pivotal, and extremely influential support that you gave personally to Louis and to the Faculty for more than 50 years. You were as much a presence at Faculty events as Louis was. You were and remain the Faculty’s of Law’s most esteemed ‘power’ couple. We owe a debt of gratitude to you, Wendy, as well as to Louis, and it is a debt that we’ll never be able to repay.

By the time he was in his 80s, formal introductions of Louis as a speaker would take some time, in properly recounting his achievements. Many here will have heard Louis begin his speech by acknowledging his introduction in typical Louis Waller fashion, saying:

Tonight, in honouring Louis, I would like to talk about ‘firsts’, because there are so many professional ‘firsts’ for which our dear friend Louis Waller will be remembered.

But in setting the scene for those ‘firsts’, I would like to talk about a consistent theme in the tributes to Louis since his death on the eve of Yom Kippur in 2019.

That theme is the profound influence Louis had on the people he met.

When I confirm that I am, I learn of yet another person who has benefited from Dad’s influence.”

It’s one thing to hear about the achievements of influential and inspiring people, but quite another to be in their presence.

Many of us here tonight had the honour of knowing Louis and being in his presence: either as a friend, a family member, a colleague, a peer, or a mentoree.

Louis Waller was Law’s second Dean, for three years until 1970, and there have been eight Law deans since Louis.

I remember talking to Louis about a particular Faculty problem we had. Louis offered me some gratuitous advice.

I said to him, ‘Louis, times have changed since you were dean 50 years ago’.

Louis paused, tilted his head back in that very Louis way, summoned inspiration from somewhere only Louis could access, flashed that impish Louis smile, and said: ‘Yes, Bryan, times change, but people don’t’.

Needless to say, I did what Louis suggested.

The place that Louis’ influence begins for many people is as a student of his, in the Waller Classroom.

Like the Vice-Chancellor, I watched enthralled at the event honouring him in the company of the judges of various courts who had been his students.

In the few seconds that it took for Louis to move from his chair to the podium, the decades fell off him in his own demeanour, and the judges sat there enthralled, transported back to the time when they were students engaged in a Louis Waller lecture experience. I remember seeing it on their faces.

Generations of students, many of whom have gone on to become influential figures in their own right, still recall Louis’ classes as pivotal moments in their lives.

So, for those of us who weren’t in those classrooms, it’s left to us to ponder: what was it that made Louis’ classes so memorable?

To understand this, we need to transport ourselves to Louis’ classroom.

In her tribute to Louis, Professor Bernadette McSherry, who is here tonight, sets the scene:

Imagine an older style lecture theatre, with tiered seating and blackboards, a large desk at the front. A stern-looking man enters and the room hushes.

He is wearing an impeccable navy-blue suit, light blue shirt and striped tie. A white handkerchief folded into triangular peaks peeps out of the top pocket.

Instead of moving behind the desk, the man walks out in front of it and, with a twinkle in his eye, he begins the lecture with:

Some students glance at each other with raised eyebrows. Others sit transfixed as the lecturer continues Hamlet’s soliloquy, until he comes to:

“The undiscovere’d country, from whose bourn / No traveller returns.”

He repeats the words and then says:

“Ladies and gentlemen, today we will consider the question: What is death? How can it be defined for the purpose of the law of homicide in an age of artificial nutrition and hydration?” "

You can see from Professor McSherry’s words that if you’re a young student sitting in Louis’ classroom, you’ve been stopped in your tracks.

You’ve just learnt an important lesson - and the actual legal content of the lecture hasn’t even begun.

(As an aside, such existential questions were Louis’ bread and butter. Indeed, he would go on to be celebrated for his pioneering work on the laws surrounding IVF, where he grappled with the question “What is life?”)

No wonder Louis’ students, including people who would go on to illustrious careers - on the bench, at the bar, in business and public service - would describe his classes using words such as “electric”, “exciting”, “riveting” and “sometimes terrifying”.

One such tribute described Louis quite simply as “the best teacher I ever had.” 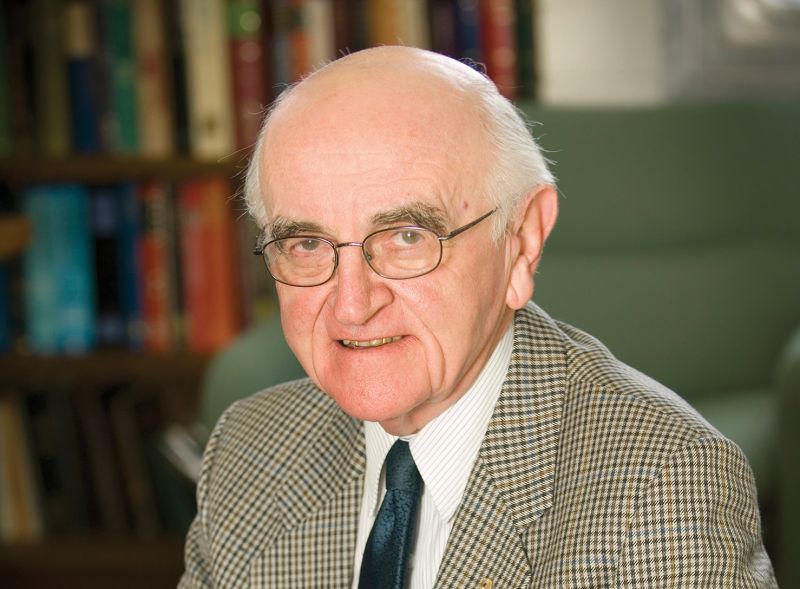 I started this speech by saying that I would talk about ‘firsts’.

Throughout his academic and public careers Louis achieved more ‘firsts’ than anyone could ever dream of.

As the Vice-Chancellor and I wrote upon hearing of his passing:

Professor Waller was one of the giants on whose shoulders both Monash University and its Faculty of Law were built more than 50 years ago.”

Louis was a founding member of the Law Faculty and became the first Dean after the Foundation Dean David Derham. He was just 33 at the time.

He was the first Chairman of the Victorian Law Reform Commission.

He authored the first Australian casebook on criminal law, which now has over 50 editions.

He was the first lay member and then Chair of the Appeals Committee of the Royal Australasian College of Surgeons.

He was the first Chairman of the International Humanitarian Law Committee of the Australian Red Cross Society.

He was Foundation President of the Victorian Aboriginal Legal Service.

His pioneering work on the laws around IVF led to the first legislation in the world to regulate IVF and human embryo research.

These professional ‘firsts’ are major achievements in and of themselves.

But pair them with the constant theme in people’s reflections on Louis: his influence. Pair his ‘firsts’ with the influence he had on generations of young people, including his students, and you get something else.

You get a man who is not known just for ‘firsts’.

Some are not content with being ‘The First’. Some are ‘The Only’. They are singular, in the most positive sense of that word.

In recent years, we have celebrated the life and legacy of the ‘One and Only’ Louis Waller at our Gala Dinner and at our alumni seminar series.

Louis described studying at Oxford on a scholarship as “life-changing”.

Beyond the personal experience as a scholar, Louis knew that it was society that could ultimately benefit from the relationship between teacher and student, and that sending students and junior academics to other places forged cultural understanding and lasting relationships as a strong buffer against prejudice, discrimination, and racism.

Looking at the world today, Louis again was a man before and of his time.

To that end, the Louis Waller Global Impact Awards provide career-progressing study opportunities here and abroad to promising students and emerging legal educators who demonstrate excellence in teaching. I thank Gandel Philanthropy for their cornerstone donation to these scholarships.

Tonight is a night of remembrance: we remember Professor Louis Waller, we remember not just his achievements but the positive influence he had on so many of us.

And we commit to honouring his legacy and his influence in the years to come.