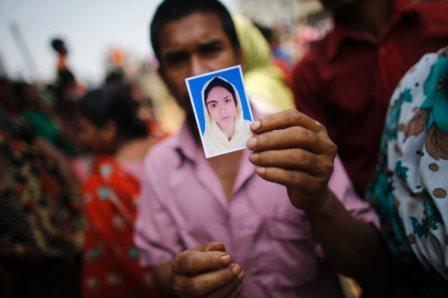 A relative holds a picture of a missing garment worker, who was in the Rana Plaza building when it collapsed in Bangladesh in 2013. Photo: Weronika

The Bangladesh Rana Plaza disaster in 2013 was a stark reminder of the human costs of a poorly regulated global economy. A supplier of major retailers like Benetton, Walmart and Coles, the garment factory collapsed as a result of poor construction and little safety regulation. 1,129 people died, making it the worst recorded disaster in the industry to date.

The case, while shocking, is not unique. From slavery in supply chains; to reliance on abusive military forces providing security; to growing evidence of transnational corporate tax evasion -the human rights costs of simply continuing business-as-usual are increasingly untenable.  It is a problem the United Nations has been grappling with, in various guises, since the 1970s.

The focus in 2014 will be on what states are doing to implement the measures recommended by the Special Representative. This includes incorporating human rights considerations in domestic laws, policies and practices across all government departments, but particularly trade, development, and foreign affairs. It also includes states taking seriously the prospect of regulating the activities of their corporate nationals abroad. Last year, the UK was the first country to release its National Action Plan (NAP) on business and human rights. The European Union has also issued a directive to EU member states to prepare their NAPs. The Australian government should be developing its own NAP, as the integration of human rights across departments requires a coordinated effort. Important issues include ensuring that business loans and grants by Australian export credit and aid agencies include human rights conditions, and that human rights are considered in Australian bilateral investment treaty negotiations.

While we wait on states to implement the Framework, a major setback in 2013 was a series of decisions by the US Supreme Court that curb the potential of the Alien Tort Statute (ATS) as a way to hold corporations to account. The ATS is an old US law that was rediscovered by plaintiff lawyers a few decades ago as a way to sue transnational corporations involved in gross human rights violations. It has provided victims with a rare avenue for bringing their claims to the courts of a developed country. Cases tend to involve corporate activities in the developing world when victims have little prospects of a fair local trial, and when local laws are often inadequate or non-existent.

However, the recent Kiobel decision has effectively gutted the ATS as a mechanism for suing corporations for alleged abuses in the developing world. Contrary to the view of lower courts, the Supreme Court found a strong presumption against the ATS applying to events outside of the US, unless the plaintiff can prove that the defendant has a significant connection to US territory. A company doing business in the US will no longer be enough.

In another case, Daimler, the Court held that, when considering whether a company has sufficient presence in the US to be sued under the ATS, the court should look at the size of the company's US presence relative to its overall global operations. In other words, the bigger and more multinational a company, the harder this test will be to satisfy. It could be said that some multinational companies are now "too big to sue" in the US.

In response to these setbacks, victims' lawyers are likely to increasingly test the courts of other developed countries under ordinary tort principles.

In contrast to the setbacks in the US courts, developments in transparency initiatives have been promising. Both the US and the EU have recently introduced mandatory disclosure of payment rules that apply to companies in industries including oil, gas, mining and logging. Disclosing payments by companies to foreign governments has significant human rights implications, as it empowers citizens in resource rich countries to follow the money and hold their governments to account. Given Australia has a significant overseas extractive industry, we should do the same. This is an area of business and human rights where international momentum toward stronger state regulation seems to be building.

The past year has seen some forward momentum and some backward steps towards the goal of ensuring human rights are respected and protected by business. Plaintiff groups are likely to be hindered by the closing of doors to the US courts, but this may lead to the creative opening of new doors. States seem increasingly willing to regulate specific issues with a bearing on human rights, and NAPs may prompt a much needed shift in government cultures. A comprehensive international solution that will ensure that disasters like Rana Plaza cease to be predictable, however, still seems some way away. Notably, a contingent of developing states recently raised the perennial prospect of a binding international treaty on business and human rights to the UN agenda. So, watch this space.

Materials on negative and positive impacts of businesses around the globe, see the Business and Human Rights Resource Centre (www.business-humanrights.org)

For an outline of transparency initiatives, see Publish what you Pay: http://www.publishwhatyoupay.org/

Dr Joanna Kyriakakis is a Senior Lecturer in the Monash Law Faculty and an Associate of the Castan Centre.