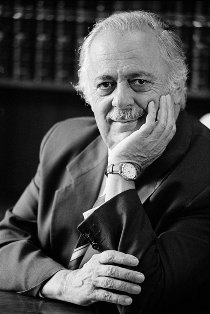 George Bizos SC is one of South Africa's leading human rights lawyers.  He was part of the team which defended Nelson Mandela, Walter Sisulu, Govan Mbeki and others in the Rivonia Trial.  He also appeared as counsel at the inquest into Steve Biko's death in police custody.  He recently defended Morgan Tswangarai against treason charges in Zimbabwe.

Appointed by then President Mandela to the Judicial Services Commission, George also led the South African Government team that argued that the death penalty was unconstitutional.

You can view the video recording of this lecture by clicking: George Bizos SC, courtesy of Hugh Crosthwaite on Vimeo, or by clicking the video below.