Public Event: Paris Aristotle, member of the Expert Panel on Asylum Seekers, on the Panel's report and its implications

Watch the full video of the event on our YouTube page.

On 5 September 2012 the Castan Centre hosted an event which gave Paris Aristotle an opportunity to speak about his involvement in the government's Expert Panel on Asylum Seekers. Aristotle was interviewed live on stage by The Age newspaper's National Affairs Editor Michael Gordon, who was one of the few journalists to visit Nauru under the Howard government.

Aristotle is the Director of Foundation House - the Victorian Foundation for Survivors of Torture. He has worked with refugees for 25 years, and was named a Member of the Order of Australia for his work in 2002. He currently chairs the Federal Government's Ministers Council on Asylum Seekers and Detention.

A key theme of the evening was Aristotle's clear commitment to the Expert Panel report as an integrated package of recommendations, rather than as a set of recommendations to be cherry-picked according to the will of any political party. He said he had informed the prime minister that his continued support was contingent on implementation of all recommendations, rather than only the deterrent aspects. He was clear that the primary focus of the report was on creating a safer, fairer and more effective regional protection framework, including an immediate increase in the humanitarian program to 20,000 places with further increases over the next five years to 27,000 places.

As is well known, the panel recommended the recommencement of offshore processing in Nauru and on Manus Island. Perhaps inevitably, it is that aspect of the report that has attracted the most attention and controversy. Aristotle explained his position on that issue. Although he said he had "significant anxiety" about the resurrection of offshore processing after the suffering experienced by those who went through it last time, he concluded it was a necessary "circuit breaker" to prevent loss of life at sea, as a better regional processing system is built. With more than 2000 boat arrivals per month the number of boats exceeded the capacity of the Navy and search and rescue agencies to reach every boat that got into distress.

Faced with the ethical dilemma of whether to recommend Australia do what it can to prevent further deaths at sea, Aristotle said he and the rest of the panel came to the conclusion that it was unacceptable to omit a recommendation to provide a strong disincentive to getting on leaky boats, as well as incentives for safer pathways.

Aristotle contended that critics were failing to face up to the life-and-death consequences of their opposition to offshore processing. He also said that many critics seemed not to have read the panel's full report. He cited an example where the panel had been criticised for removing access to family reunion when it had in fact increased the number of places by 4000 per annum in the family migration stream.

On regional cooperation, Aristotle noted that there are significant diplomatic challenges that required further work. He cited as one example the ill-will towards Australia on this issue on the part of the Indonesian government after the Oceanic Viking and Merak episodes.

Additionally, the mandatory imprisonment of young Indonesian fishermen on people-smuggling charges has aggravated Indonesian voters, who see them as victims of the trade rather than perpetrators. The panel recommended it be scrapped, and the government moved swiftly to comply.

Aristotle said he recognised that enhanced regional cooperation is crucial to the success of the Panel's package of recommendations. He said that a specific timetable for the proposed "no advantage" principle was not possible as it depended on a range of factors such as need, vulnerability and the impact of the expanded humanitarian program. He said people could be kept on Nauru and Manus for "a couple of years" before being resettled depending on the above factors. He also conceded that the initial transfers to the islands may produce ugly scenes.

Still, he insists that the regime as recommended is not intended to be punitive, and that safeguards such as no arbitrary detention, medical and mental health care, legal representation, an independent review process, NGO involvement and an oversight and monitoring group will constitute a significant improvement over the original Pacific Solution. He reported that his organisation and others are already advising the government on the implementation of safeguards and how processing should proceed.

Aristotle was at pains to point out that there are several aspects of the Panel's recommendations (which have already been accepted in principle by the government) which are unprecedented - for example the expanded humanitarian program and a further $70m dollars for UNHCR, NGO's and civil society groups to implement a regional protection framework. He urged NGOs to grasp the opportunity presented by these initiatives.

Aristotle expected the first planeload of the 400 extra refugees to be resettled from Indonesia to arrive in Australia very soon, and an announcement on the extra 4000 places in the family stream would be announced within the next couple of weeks. In summation, there was no perfect answer to the problem of irregular asylum seeker flows; only improved ways of managing the issue, he said. He cautioned that we cannot take an unlimited number of refugees, nor can we have a credible asylum system under the Refugees Convention unless we are able to return those who are found not to be in need of protection.

For Aristotle, the most important thing is to provide a system which is as fair as possible to all refugees - those who cannot arrive by boat as well as those who can. 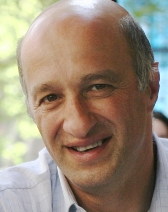 Paris Aristotle discussed the report of the Expert Panel on Asylum Seekers in conversation with Michael Gordon, the National Affairs Editor of The Age.

Paris Aristotle AM is the Director of the Victorian Foundation for Survivors of Torture Inc (also known as Foundation House), a position he has held since helped found the organisation in 1987.

For over 25 years Paris has worked to in the refugee resettlement and humanitarian field and has held many senior positions on government advisory bodies.  Currently Paris is Chair of the Minster for Immigration and Citizenship's Council on Asylum Seekers and Detention (MCASD).  Paris is also a member of the federal government's Refugee Resettlement Advisory Council (RRAC), the Residence Determination Reference Group (RDRG) and the Onshore Protection Consultative Group (OPCG).

Paris has extensive experience in the area of refugee resettlement and the provision of services to survivors of torture and trauma.  He has been a regular presenter and contributor to UNHCR meetings and publications over many years.

In 2002 Paris was made a Member of the Order of Australia and in 2003 was awarded an Australian Centenary Medal; both honours recognising his longstanding work with refugees and asylum seekers, in particular survivors of torture and trauma.

In 2012 Paris was appointed to the Prime Minister's Expert Panel on Asylum Seekers alongside Air Chief Marshal Angus Houston AC AFC (Retired) and Professor Michael L'Estrange AO to advise and provide recommendations to the Government on policy options to deter asylum seekers from risking their lives on dangerous boat journeys to Australia.  The panel's report was handed down on 13 August.