When the Australia Square tower thrust into the skies above Circular Quay in 1967 it acted as a bold proclamation that Sydney was to be taken seriously as a global city.

It might have taken until the 2000 Olympics for it to objectively achieve that boast, but architect Harry Seidler’s 50-level building on George Street has so contributed and shaped Sydney’s identity that it has earned the descriptor ‘iconic’.

Floyd is an artist and senior lecturer in Monash University’s Department of Fine Art and is represented by Anna Schwartz Gallery. She was commissioned by Toga Far East Hotels to create the work for the Adina Hotel in association with Monash Art Projects (MAP), the collaborative studio of artists and designers led by Professor Callum Morton that seeks to change how we think of art in the public sphere.

Floyd grew up in Melbourne in the 1970s and 1980s admiring Seidler’s Sydney tower with its supremely confident modernism and its vibrant shade umbrellas installed on a public plaza at ground level. 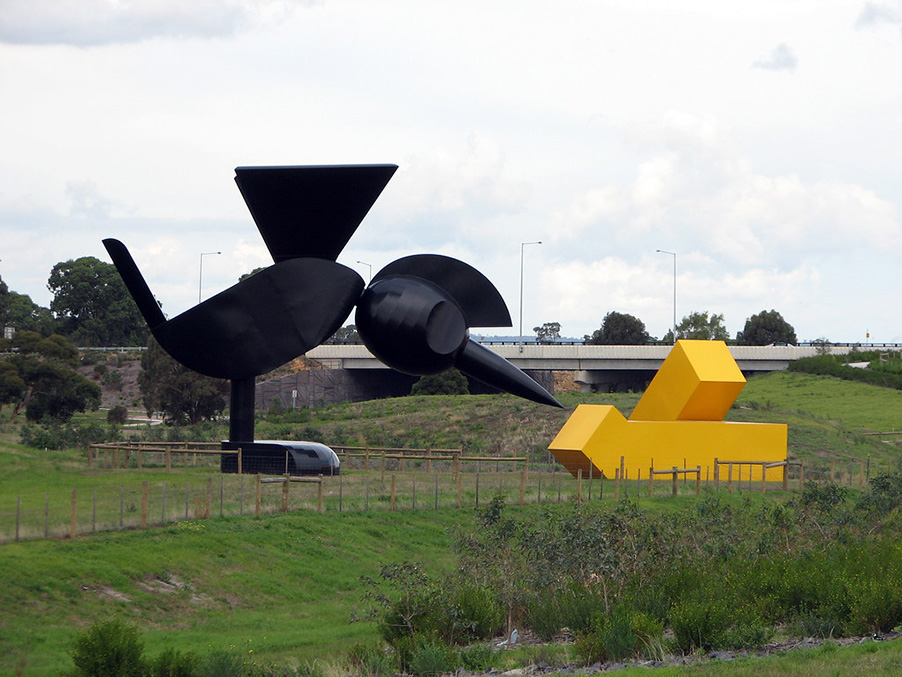 “I couldn’t believe it when I was given this opportunity,” she says. “Australia Square is iconic on a number of different levels. It was an era of optimistic modernism that came from his (Seidler’s) European heritage and post war political history, that really resonated with me,”

OPEN SPACE! is made of four separate sculptures spelling the word ‘OPEN’ with the ‘P’ reaching six metres in height. The welded aluminium letters feature the Suffragette colours of purple and green in automotive paint.

“A tongue-in-cheek reference to my work squeezed in between the phallic buildings by two male architects,” she says.

At the base of Australia Square is the legendary American artist Alexander Calder’s sculpture Crossed Shears. Calder was a toymaker, and Floyd’s own family were toymakers in Melbourne’s Canterbury neighbourhood. “So I have a really great love for his work.”

Floyd’s work is influenced by Calder’s 1931 toy circus theatre Grand Cirque Calder and in OPEN SPACE!, she reimagines Curtin Place as a place for playful interaction. From the early 2000s, Floyd became known for her use of carved wooden sculptures of blocks and type fonts that referenced her family history.

Her artworks draw on skills she learned while helping out in the family factory filled with woodworking machinery and dominated by a gigantic three-phase bandsaw.

“I still use the same linisher inherited from my grandmother [who crafted wooden blocks for kindergartens across Australia] and I have all my grandfather’s drills.”

OPEN SPACE! has been five years in the making – a time frame that Floyd says shocked her Monash students – but which she has learned to be comfortable with in a career of making large-scale works.

The architectural and civil design aspect of making large public works necessitates the involvement of many stakeholders from many entities and public authorities. With that involvement comes the input and opinions of many. Each has its own technical, legal, and aesthetic perspectives, its own wish lists, and its own trepidations. This often includes hypersensitivity to how the public and media might react to the final artwork.

“Stakeholders can get extremely anxious about the public reception,” Floyd says. When her Eastlink sculpted bird was installed, a local newspaper ran the headline ‘Big Chook Gets Dirty Looks’ which she found pretty funny. “You don’t have to like public art,” she says.

She enjoys the process because of the rigorous and disciplined requirements of a large-scale civil project. Emily Floyd, Abstract Labour, 2014. Commissioned with support from the Victorian Government through Arts Victoria and the Victorian Public Sculpture Fund 2013.

As the artist, it is she who holds what she calls the vision and “collective memory” of the project for the dozens, if not hundreds of people, who come and go throughout its lifespan.

“It’s very important to keep control,” she says, and that includes being able to anticipate and adapt to the many opportunities or exigencies that might occur.

Floyd’s work is influenced by her interest in modernism and its complexities, by artists including Calder, and in Australia by, among others, Inga King. Like Seidler, she was a European, post-war immigrant and she became famous for her monumental steel sculptures.

Those who shaped Floyd’s work also include Alma Seidhoff-Buscher whose wooden Bauhaus toy blocks she grew up with at home and whose toy ships were sold at her family’s shop.

The process of creating a large-scale work is complex but Floyd says working with the MAP lab, its lead architect Helen Walter and the project’s curator Amanda Sharrad, allowed her to completely dedicate herself to both conceive and realise the work at the scale and finish it needed.

The manufacture of the four components of OPEN SPACE! was overseen by her long-time collaborator Robert Hook at his Kensington workshop before it was trucked to Sydney.

“People think of public sculpture as this conceptual head space but for most people, it’s a physical relationship. It gives me great joy to see people engaging and relating to the artwork. At Heide, there are signs not to climb on the work, but everyone does of course, and it’s an amazing thing to see.”