What it takes to be a full-time artist

Contemporary artist James Parrett feels he’s had the freedom to forge his own artistic path – a benefit he traces back to his time at Monash.

What does it take to be a full-time artist? According to James Parrett, one of Australia’s highly awarded sculptors, making a living as a creative requires passion, dedication and, ultimately, belief in yourself. And while this is true for many professions, careers in the arts can be a gamble.

Parrett graduated from Monash University with a Bachelor of Fine Art in 1999, followed by an honours degree in sculpture from Victorian College of the Arts, and has been a professional full-time sculptor since 2005. And while he modestly claims he’s “been very lucky”, the fact is he trails a string of awards for his creations.

Everything is beauty-based, and I think art brings that to the forefront in galleries and cities around the world.

Among these is the 2018 Aqualand Sculpture Award at Sculpture by the Sea, Bondi, which he won for his 2.5-metre curved stainless steel structure that evokes the changing energy of a wave. It’s the biggest sculpture prize in the southern hemisphere, and Parrett says winning was a welcome surprise. “It was a huge moment for my career.” 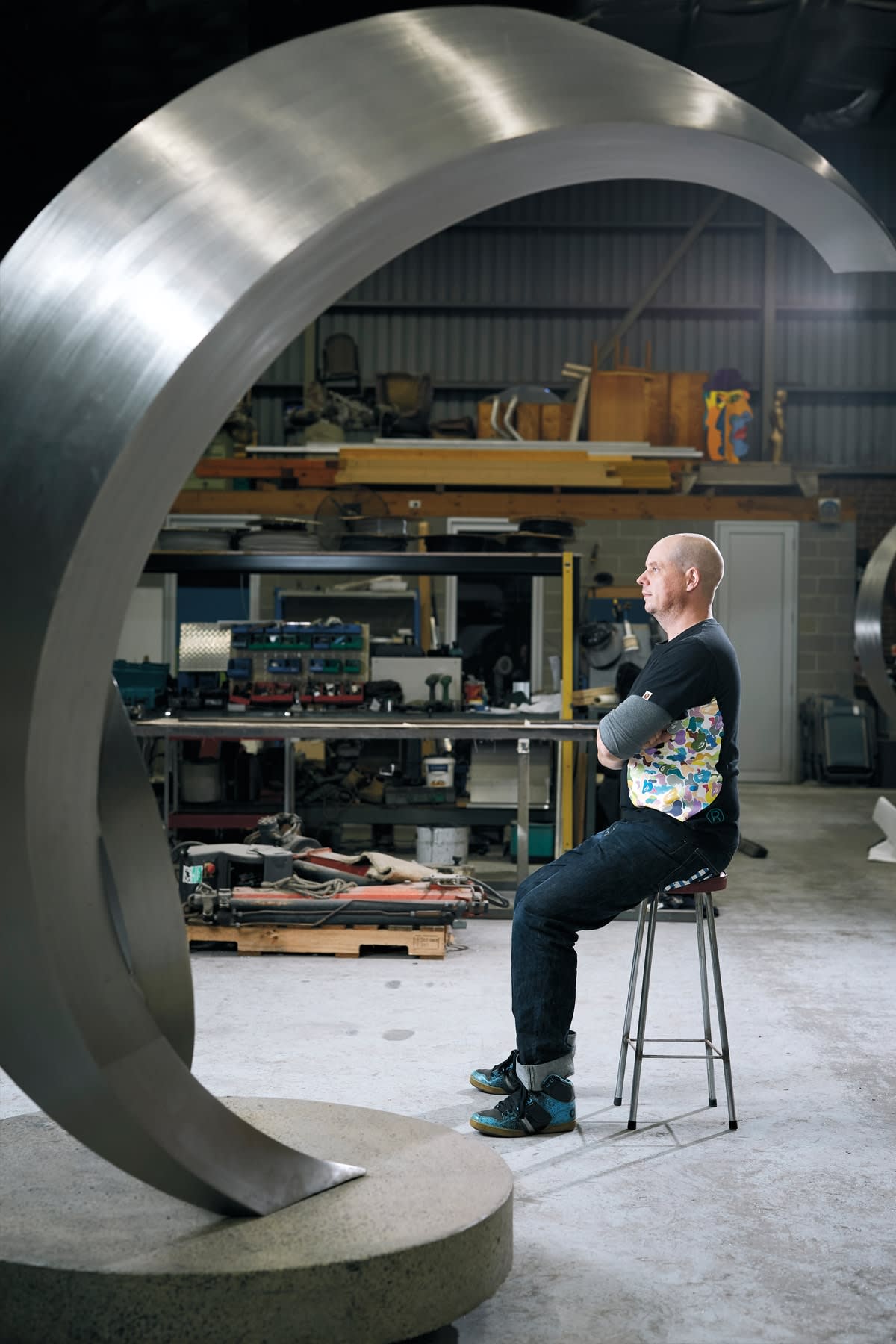 Awards, of course, are no hindrance to commercial success, or to Parrett’s private or corporate commissions, including striking works such as the towering and naturally oxidising spiral sculpture Swerve on the Hume Highway north of Melbourne.

Then there’s government commissions, such as his Rabaul and Montevideo Maru sculpture at the Australian War Memorial in Canberra, which was crafted to commemorate the 845 Australian POWs and 245 civilian prisoners killed when a US submarine torpedoed the Japanese transport vessel Montevideo Maru.

Parrett currently works mainly with marine-grade stainless steel, with sections painted with a tinted clear-coat automotive paint. “It’s really interesting,” he says. “The way you can create different layers of depth and different reflective qualities with these materials is really exciting. It’s always good to learn a new technique that complements your own aesthetic style.”

Parrett feels he’s had the freedom to forge his own artistic path – a benefit he traces back to Monash. He says while it’s “a bit of an underdog in the arts world”, this gives it a particular strength. “We could do what we wanted to do and there was less pressure for us to succeed,” he says. “We were free to explore what we wanted to.”

Having an “amazing group” of lecturers who were also practising artists was helpful and important for students to see, he says. “That’s what set me up to take myself seriously and think of myself as a professional.”

Parrett’s passion for art is evident. “It plays an important role in the wider community and our personal lives, particularly in stirring emotions around beauty,” he says. “Beauty is an important thing. We all have a different perception of what’s beautiful and what’s not, and that’s what art brings.”

Everyone makes decisions based on what they like, on what they find beautiful, he says – decisions about the type of house they buy, their car, even their kettle. “Everything is beauty-based, and I think art brings that to the forefront in galleries and cities around the world.”

Parrett says art also creates conversation and controversy. Whether they love or hate it, people are opinionated about art, and this creates dialogue – about the art itself, its place in our lives and in society – while also fuelling discussion about the wider world. For Parrett, art is his everyday, but it’s also his passion. “I’m really lucky that I get to do what I love.”