A proposal for the NGV Architecture Commission.

Hovering in the space between art and architecture, ‘Blubber’ is a work that conflates the rigid geometry of the grid with the soft, organic and indeterminate. It is a piece of experimental architecture that incorporates into its development and formation the unpredictable forces of both human nature and their participation and indeed elemental nature, namely the sun and the wind.

Channelling the works of Haus-Rocker-Co, Man Ray, Christo, Magritte and Hans Bellmer, the external inflated form when seen moving against the surrounding context of the NGV courtyard and its buildings, will appear like some sort of abstracted or distended body in motion. In its deflated state the pavilion will be rendered as a type of wrapped or covered work that is still as it were ‘under construction’.

The interior space, accessed through a large single opening, has a scaffold system that, in plan, follows the 9 square geometric pattern Andrea Palladio established as the starting point for his famous Villa’s. Widely employed within the history of architecture it has been used more recently by figures such as John Hedjuk and Peter Eisenman in the development of their own practices.

This dense scaffold grid is the housing for a cluster of moving industrial fans that are mounted at specific locations inside the grid. These fans are powered by a solar collection and storage system that sits on the ground alongside the pavilion. This system consists of nine photovoltaic solar panels and a battery bank for the storage of power. If there is not enough power collected ‘Blubber’ will remain in its deflated state, gently moving in the wind.

There are a number of opportunities for the audience to participate in the form and atmosphere of ‘Blubber’. A collection of stationary/fixed bicycles will be housed on the interior and will be connected to a constellation of lights mounted in a geometric formation on the scaffold grid. Energy generated through the force of pedalling will light up the pavilion, something that will be particularly poetic in the late afternoon and early evening. Also the exterior ties that ‘constrain’ the fabric at various points can be clipped and unclipped into different positions by the audience to alter the shape of ‘Blubber’ as it is moving. 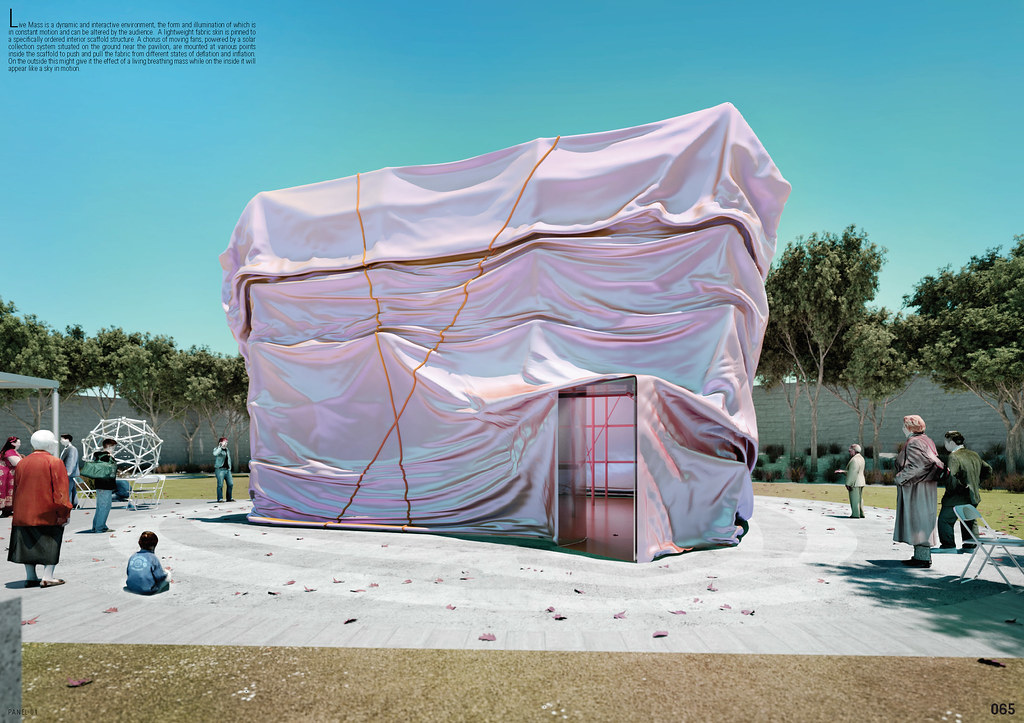 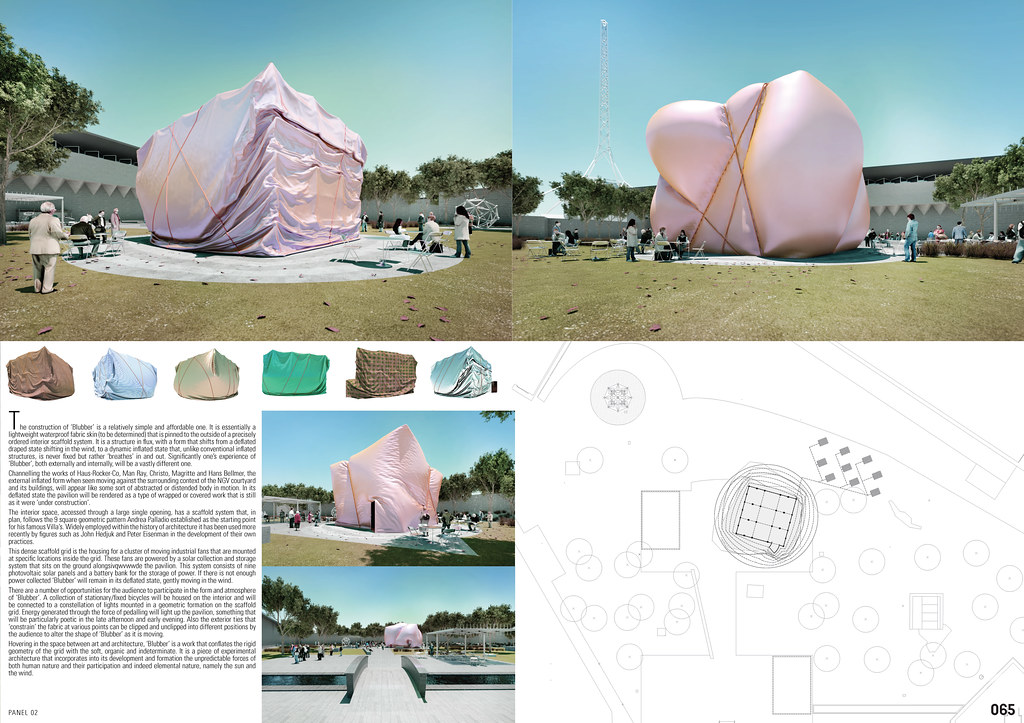 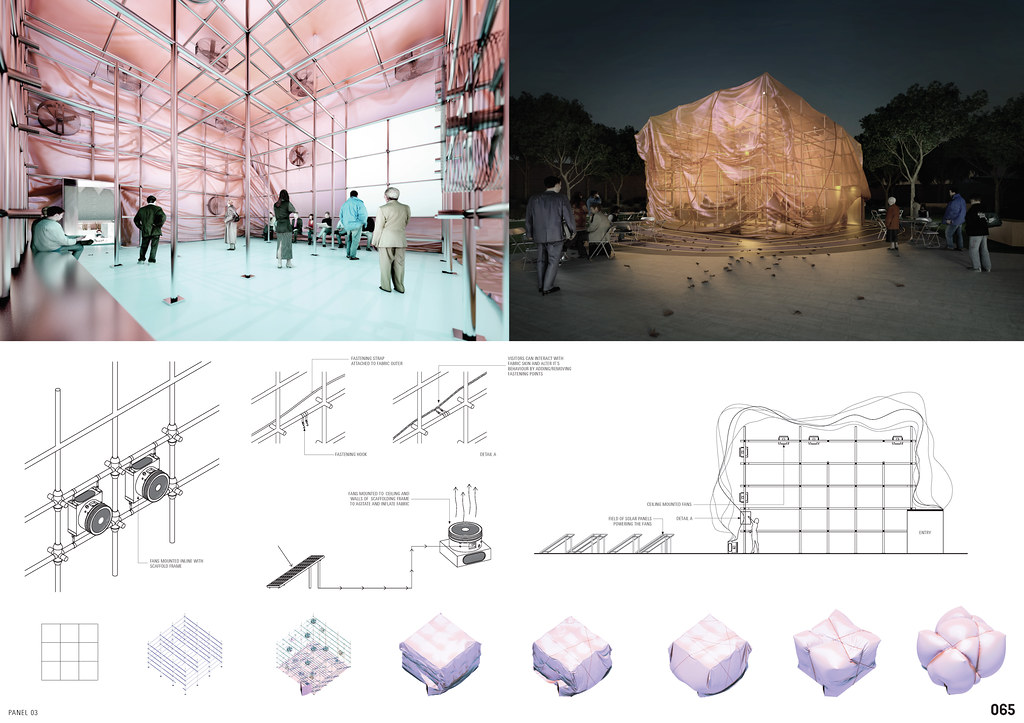 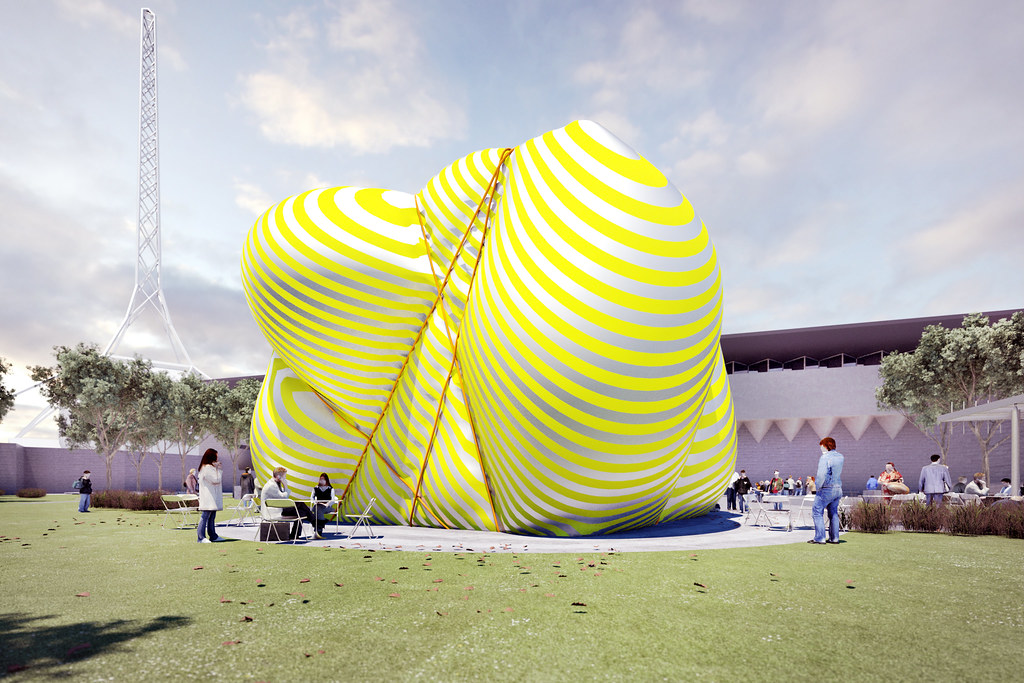 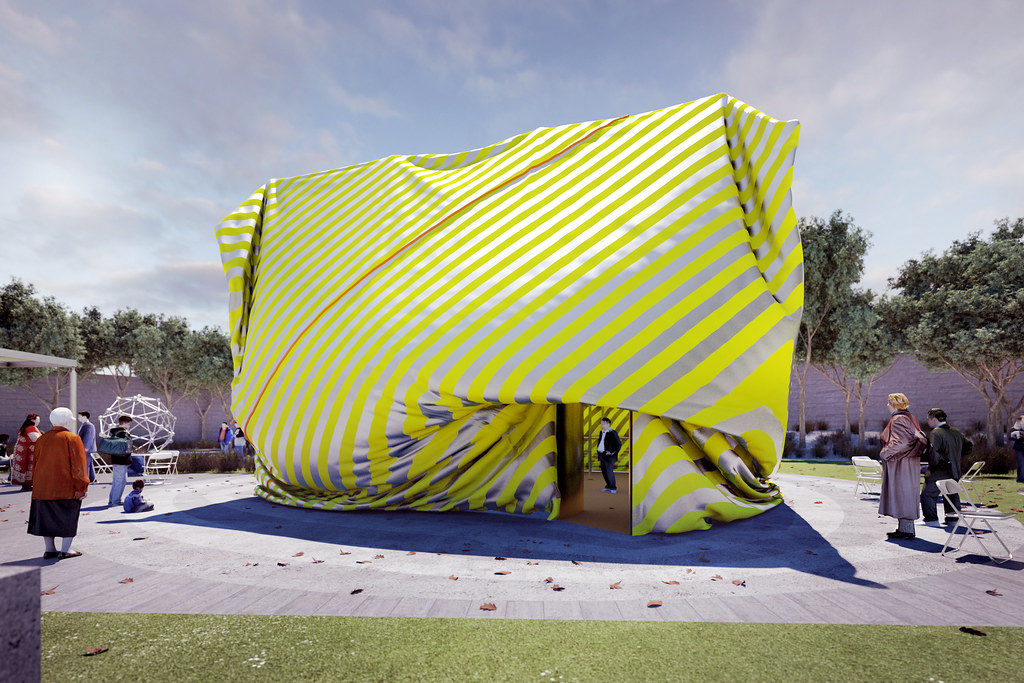 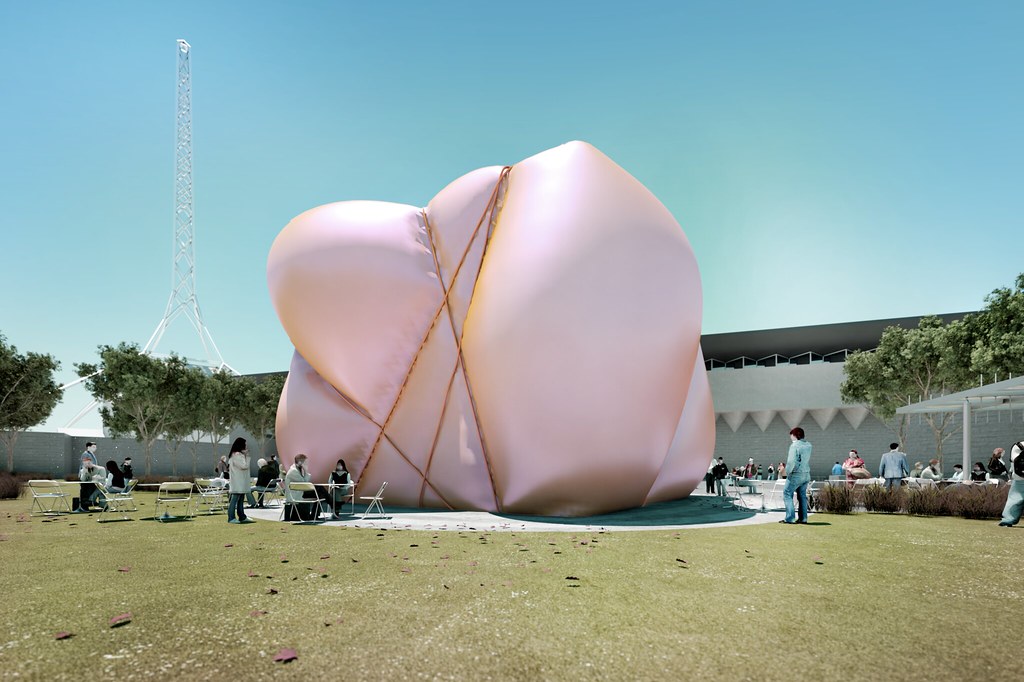 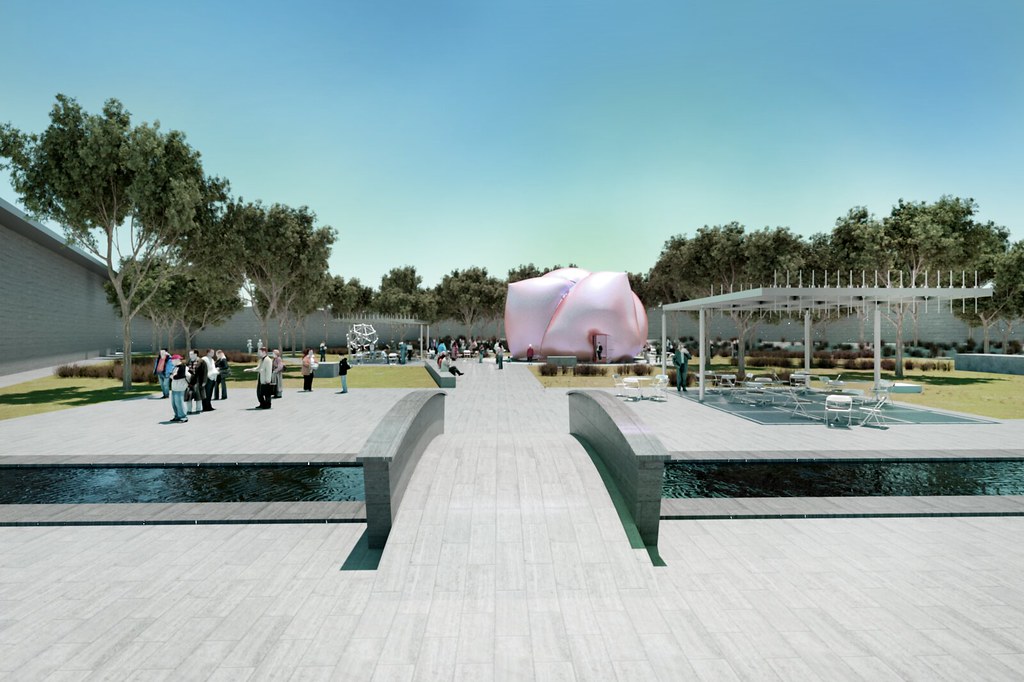 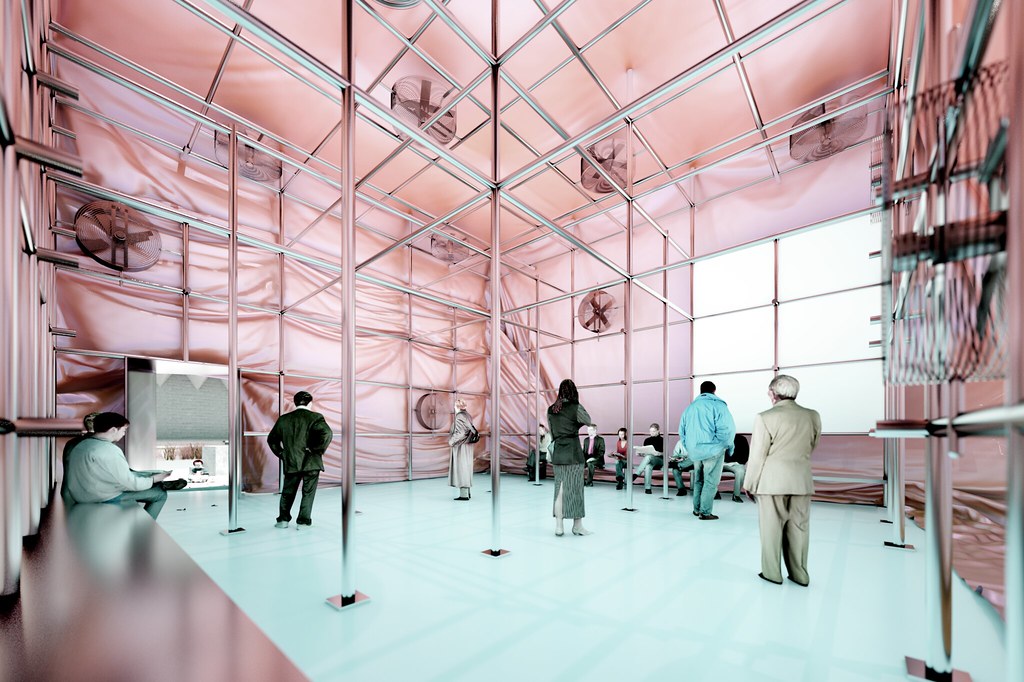 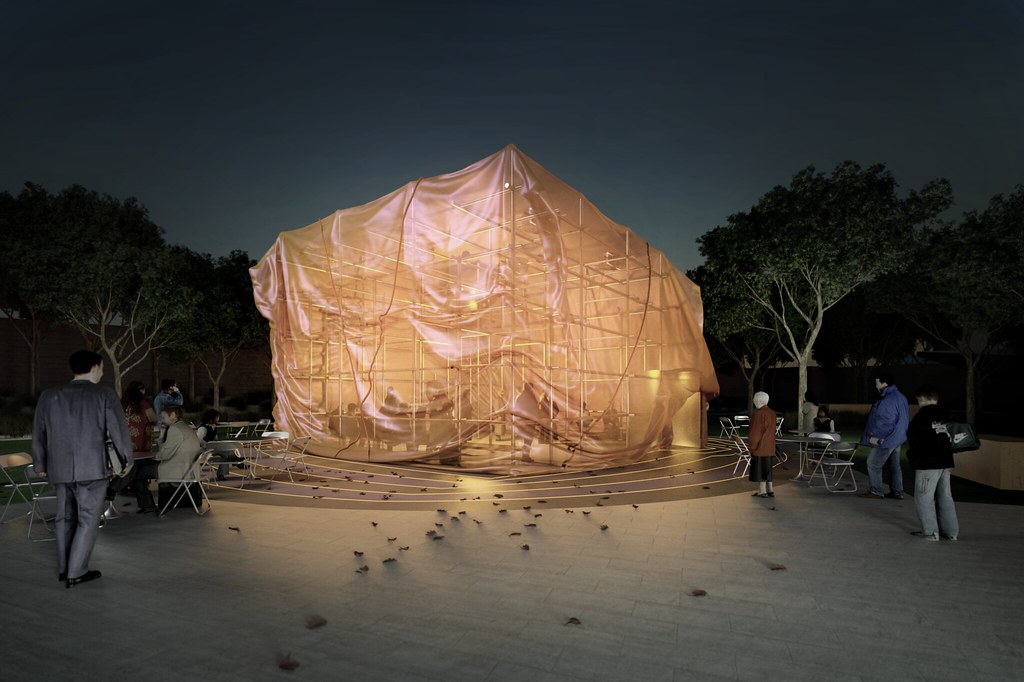 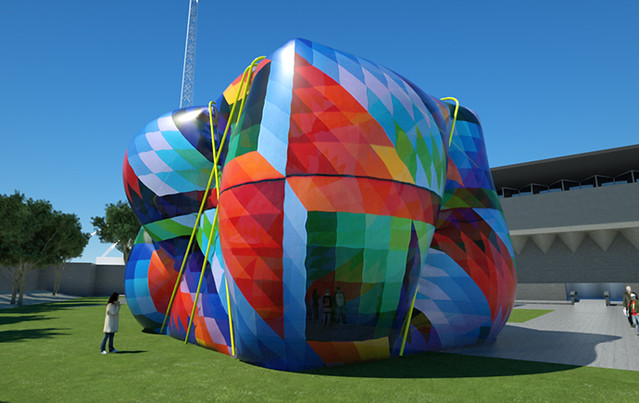