Catastrophising, intrusive thoughts, raised levels of cortisol in the bloodstream and psychopathy in hell

My studio research documents a metacognitive process regarding ideas of hell and associated images. Firstly there is Letters from hell. These letters are a response to Dante’s divine comedy Inferno. These letters give an intimate, micro temporal account of catastrophising and intrusive thoughts in a psychopathically controlled environment. These letters offer background to all later studio research. Letters form hell investigates a history of hell, child abuse, religious stories, nationalist history, television, a dysfunctional work- place and malignant positioning associated with the imagined community that Christians call hell.

The second part has involved the construction of artworks, that are collectively titled Catastrophising, intrusive thoughts, raised levels of cortisol in the bloodstream and psychopathy in hell. These photographs and models painstakingly reproduce intrusive thoughts/images that have typically accompanied episodes of catastrophising in a psychopathically controlled environment, a contemporary hell.

My research investigates the possibility that Christian imaginings of hell, as documented by Dante Aligheri and Hieronymus Bosch, were the result of cognitive disorders and neurological process that are currently perceived as symptomatic of some brain injuries and dreadful illnesses. 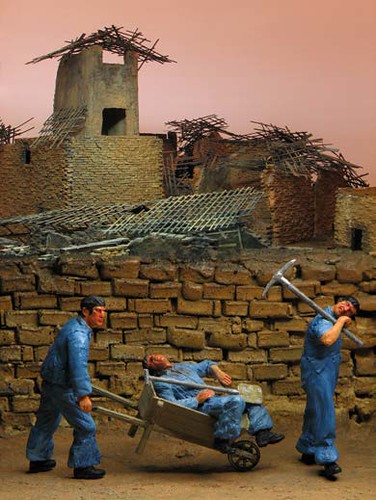