This design studio borrows its name from Italo Calvino’s short story “World Memory.” Due to an imminent disappearance of life on Earth, the story tells how an institution works to collect the human memory and transmit all we know to others so that all we have done may not have been on vain.

Like Calvino’s tale, the studio assumes that the world as we know it is disappearing.  Students will imagine and invent a miniature archipelago composed of a series of spatial pockets and actions for consuming contemporary culture. These islands of culture are fragments of the ‘memory of the world’.

The studio will be divided into four different phases:

PROJECT A: The Inventory of Culture

The inventory, composed of two parts and generated through collage and rhetorical procedures such as irony or double meaning, will reflect on contemporary values of our society.

A1. Inventory of Material Culture: A visual list of things or ‘nouns’ that humans make and use to consume culture categorised in several categories.

A2. Inventory of Culture Consumption: Twelve new ways of consumption of culture using a drawn ‘story’ and recontextualising some of the material culture chosen in the first step. The new visions will be organised by the scale of the things involved in the consumption (S, M, L, XL).

PROJECT B: The Culture Transformers

It reflects on the overproduction of material culture in current times and will take the form of two machines in which movement and change (of culture) are the essential elements. Constructed of found objects, these two transformers at the scale of the body will manipulate, transform, destroy or reinterpret somehow the consumption of culture.

PROJECT C: The Factory of Culture

Students progress from individual to group work to create a factory at the scale of the city for the consumption of culture: a laboratory of culture which is to be guided by the strategy of “cross-programming.”

PROJECT D: The Archipelago of Culture

A group of islands orchestrating all the previous challenges not merely as an architectural design but mostly as a compositional score or action plan: a landscape(s) for the consumption of culture imagined as a set of tactical proposals to derive the maximum benefit from the implantation of the previous work on a real site in Melbourne CBD. 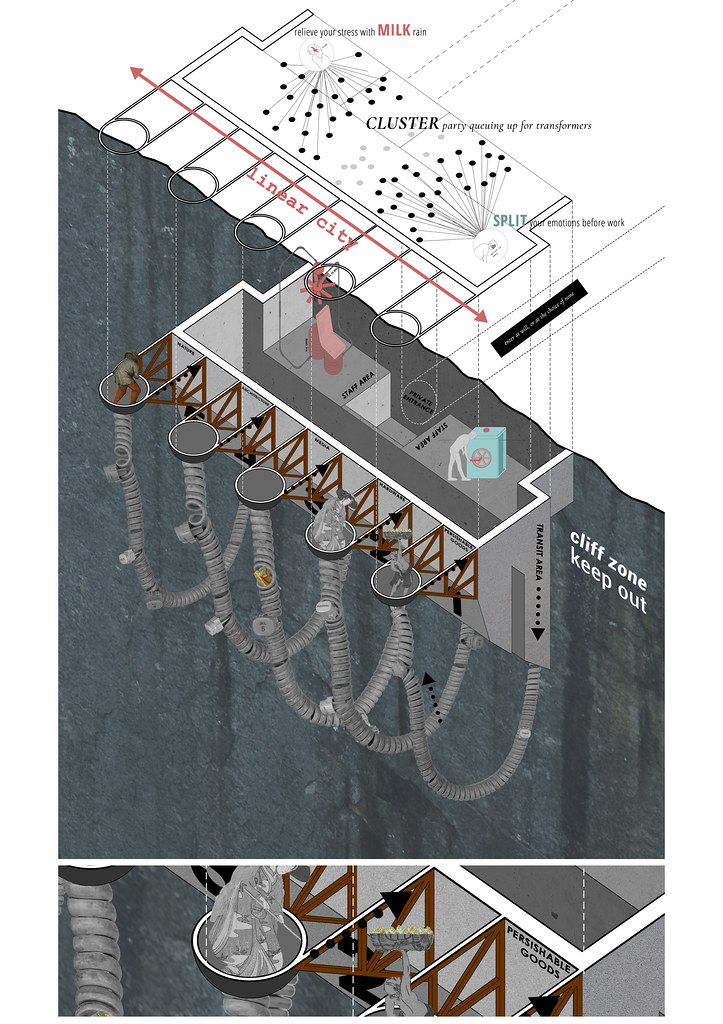 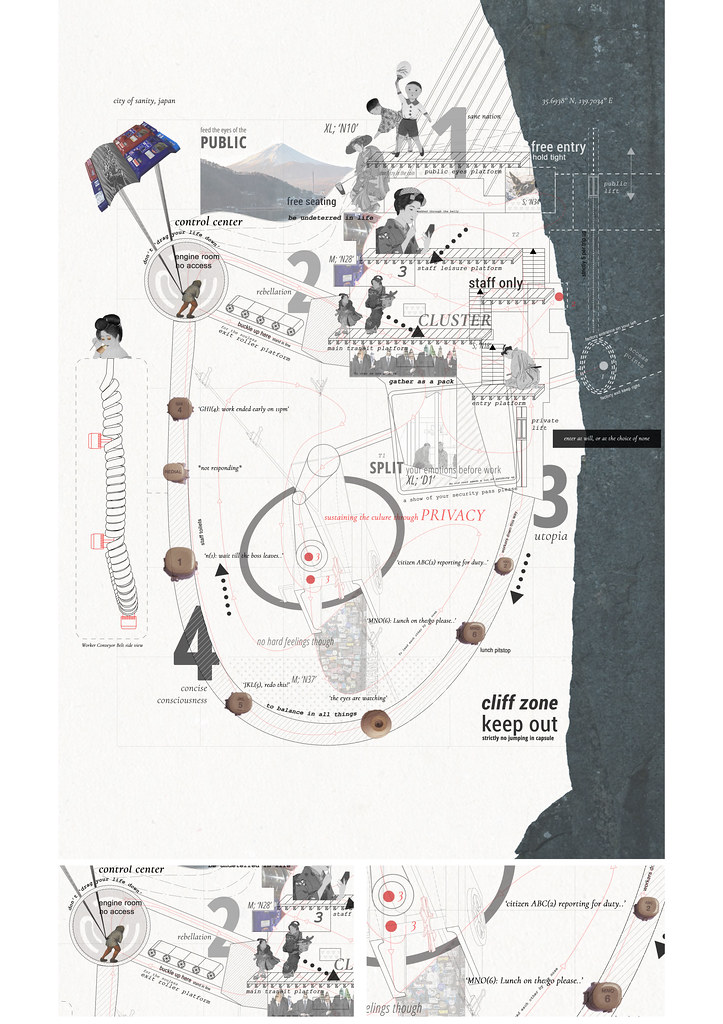 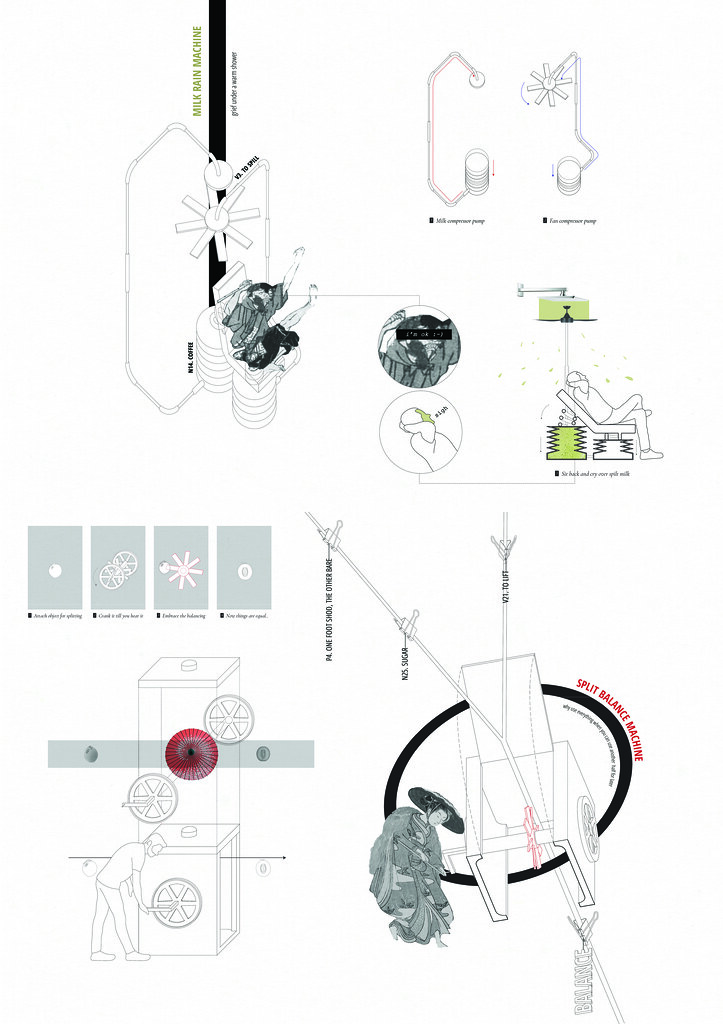 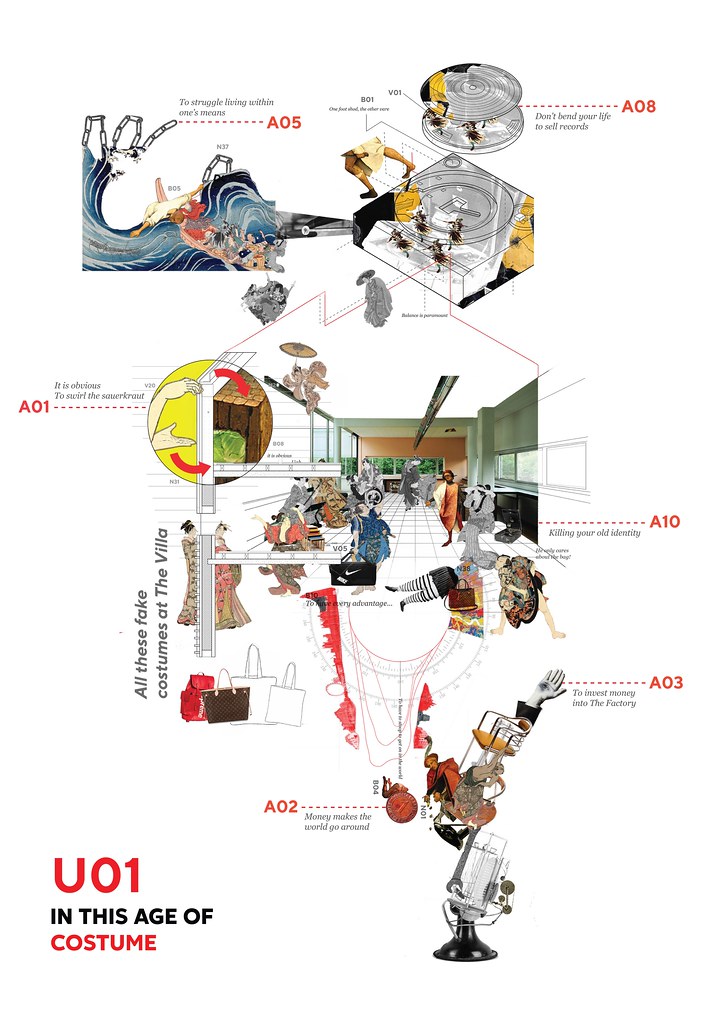 All of the characters from the previous actions are invited to congregate at a costume party in The Villa. Eventually, they become their costumes, living a false identity. 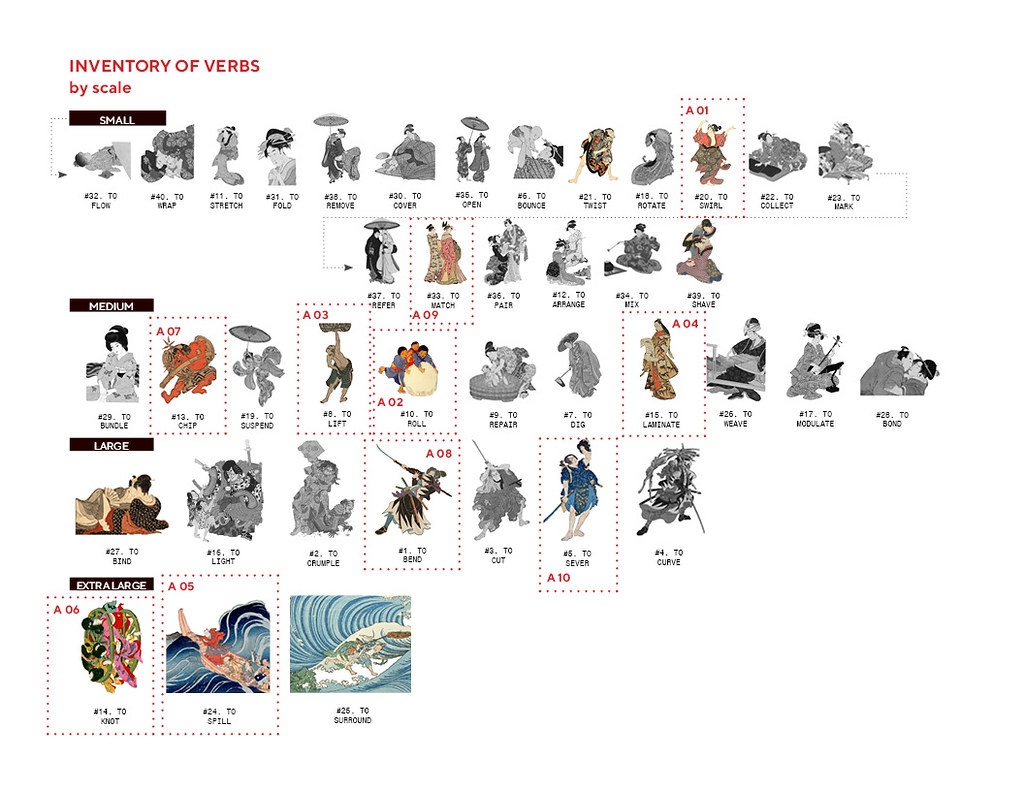 Anna Chan, Inventory of the Edo Period (By Scale)
2020

The inventory of the Edo period ordered by scale. 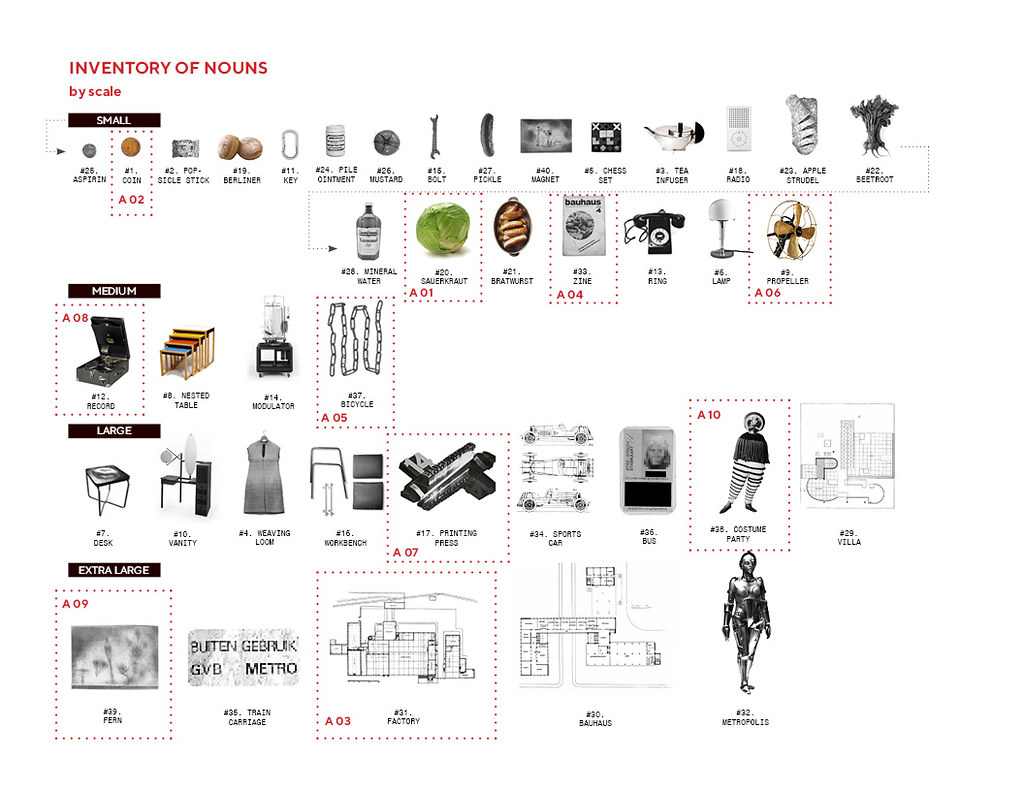 Anna Chan, Inventory of the Bauhaus (By Scale)
2020

An inventory of objects from the Bauhaus period, ordered by scale. 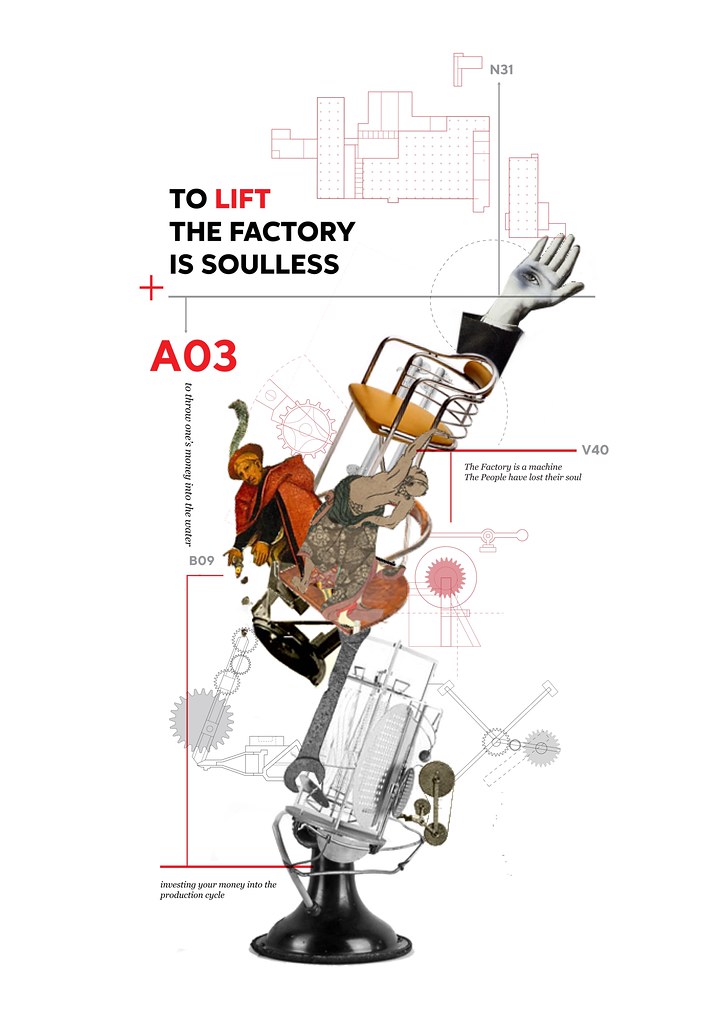 Anna Chan, To Lift The Factory Is Soulless
2020

The new proverb is a critique on uplifting The Factory that produces goods for consumption. 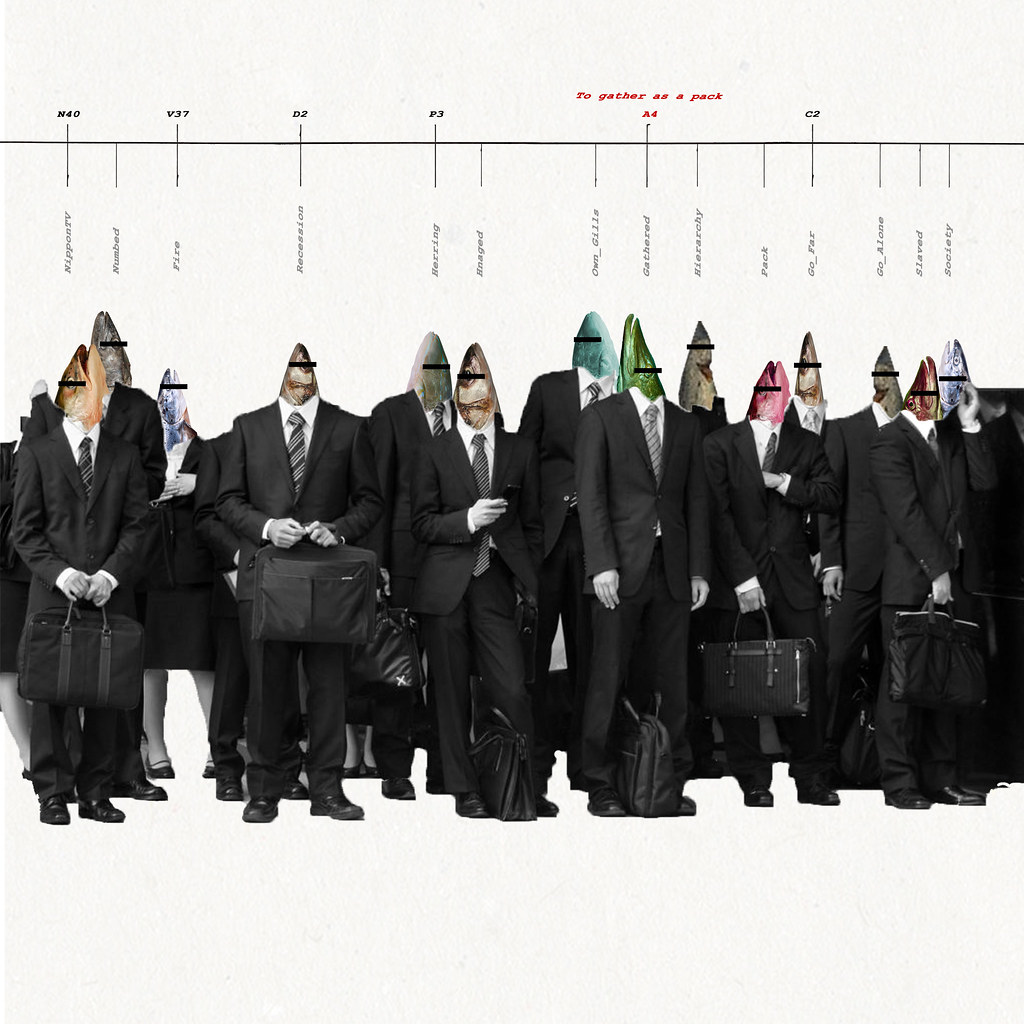 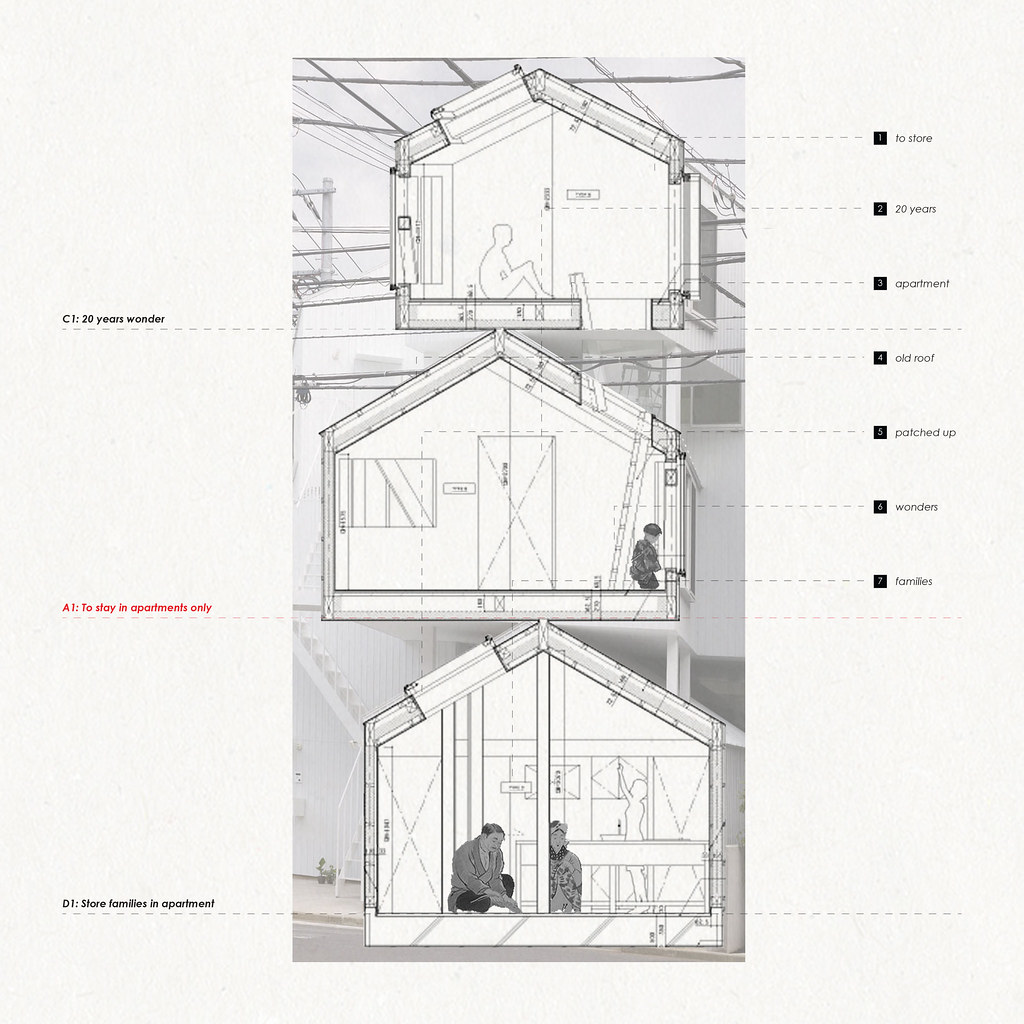 In the urban scene of the 'City of Sanity, Japan', "There lies a point where everything is as it should’ve been everyday. The daily grind has put people to their knees, transiting from the ‘Sane nation’ to ‘Rebellion’ phase, where they do against the norm and break the society standards. ‘Utopia’ is a place where their heart always desires, unleashing their inner satisfaction of how one should enjoy their life. At the end of the day, it was all just a dream, the ‘city of Sanity’ was so close yet so far, no point dwelling in there. 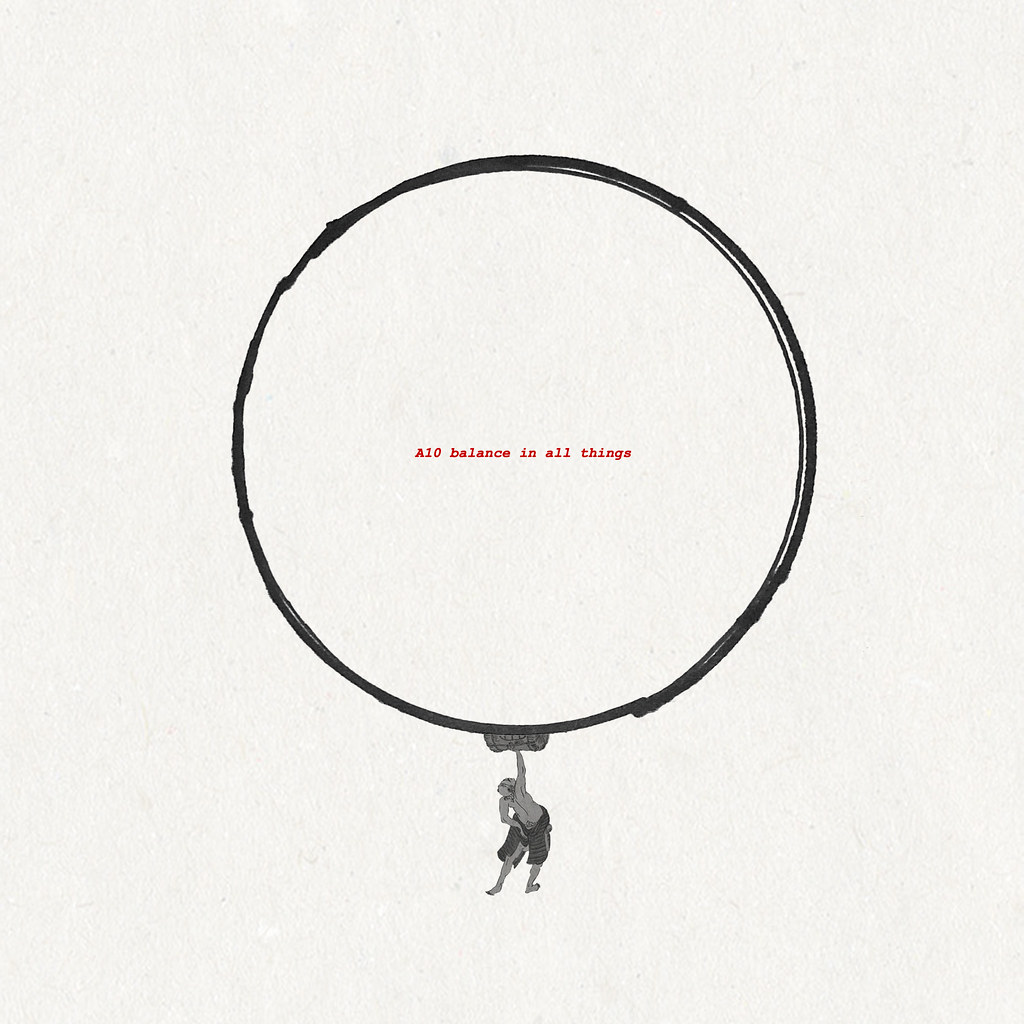 Ultimately in the ‘Concise Consciousness’, got to find the balance in all things and move on.." 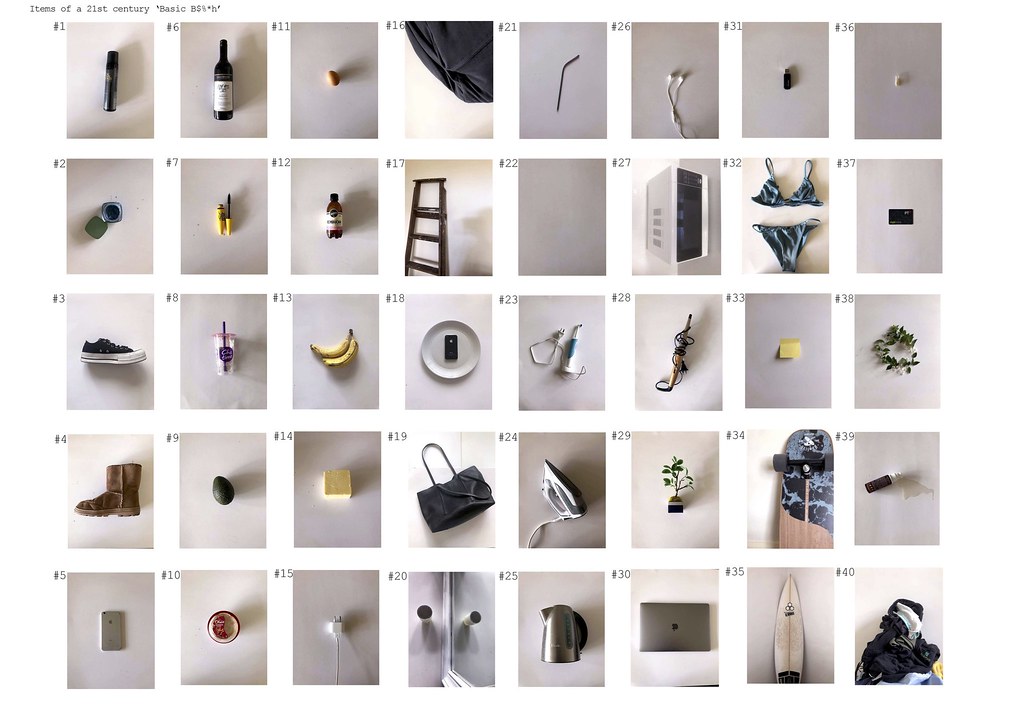 The main idea of my Inventory of Material Culture is the modern label of a 'Basic B#*@h'. The attitude and actions undertaken by someone of this sub-category have been carried through to my Inventory of Consumpuon Cul-ture. My diptchys, comparison collages and hybrid drawings aim to mock the activities or attitudes of a Basic B#*@h by either exaggerating the idea with speech and metaphoric visuals or decontextualising the action in an abnormal scenario (funeral celebrations exaggerates this idea the most.) 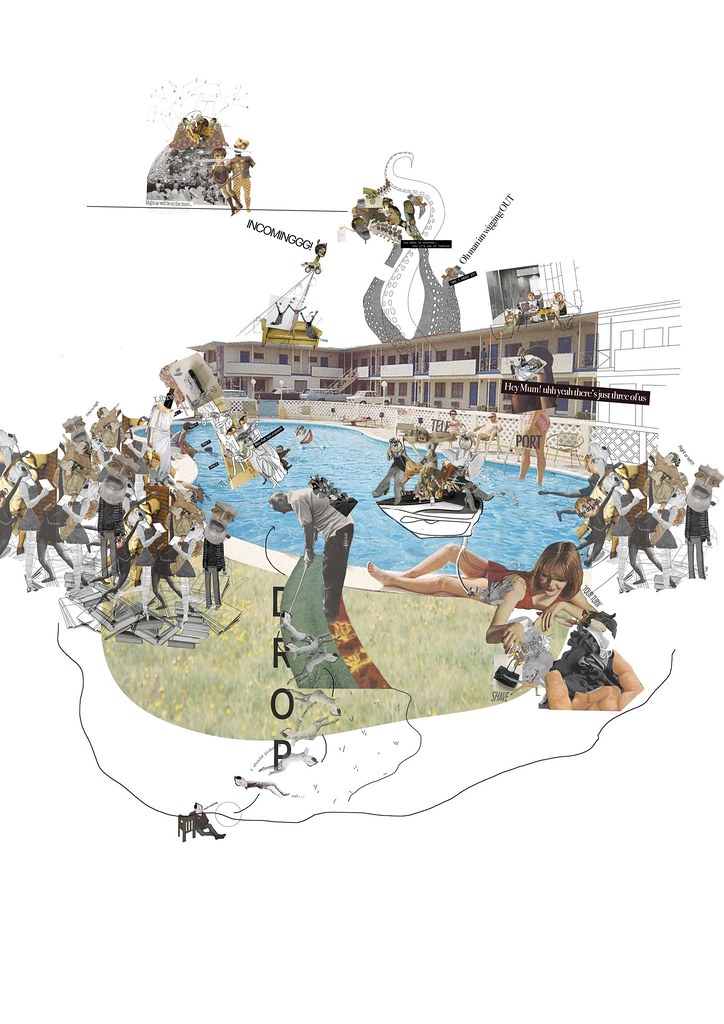 The main words (which relate to my theme) framing my actions are 'Re-bellious', 'Party-goer', 'Social-reputation' and 'Lazy' 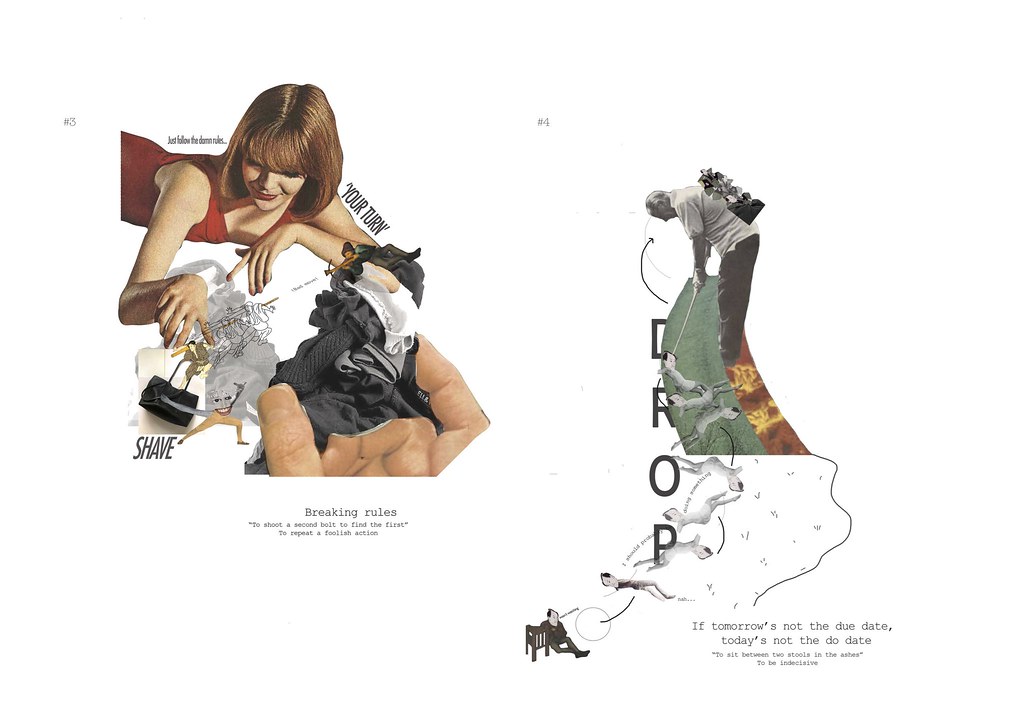 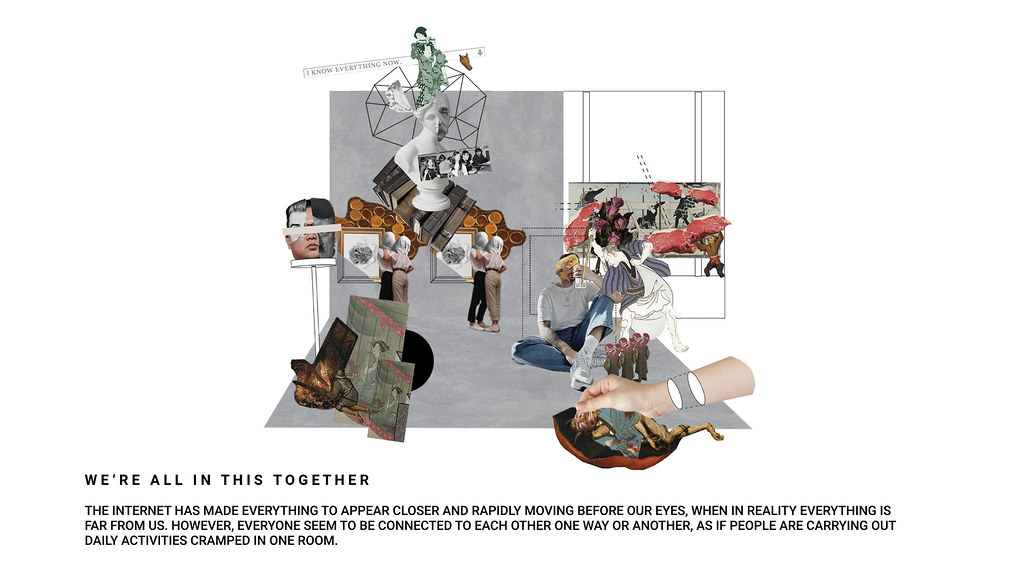 Indra Liusuari, Take a Break and Have Some Rest
2020 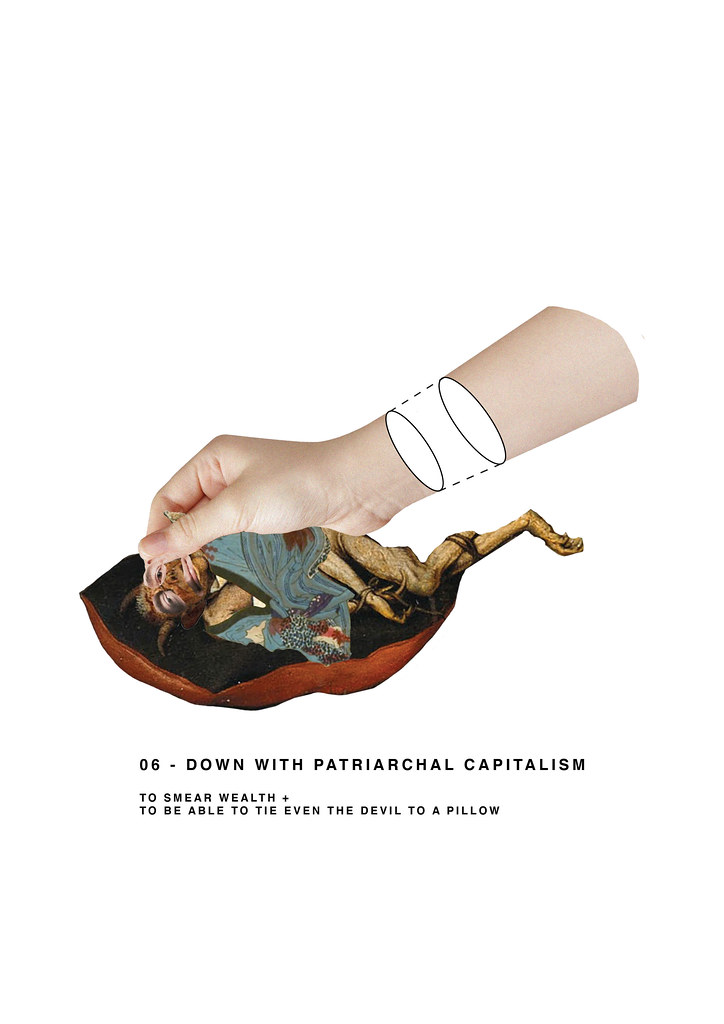 Indra Liusuari, Down with patriarchal capitalism
2020 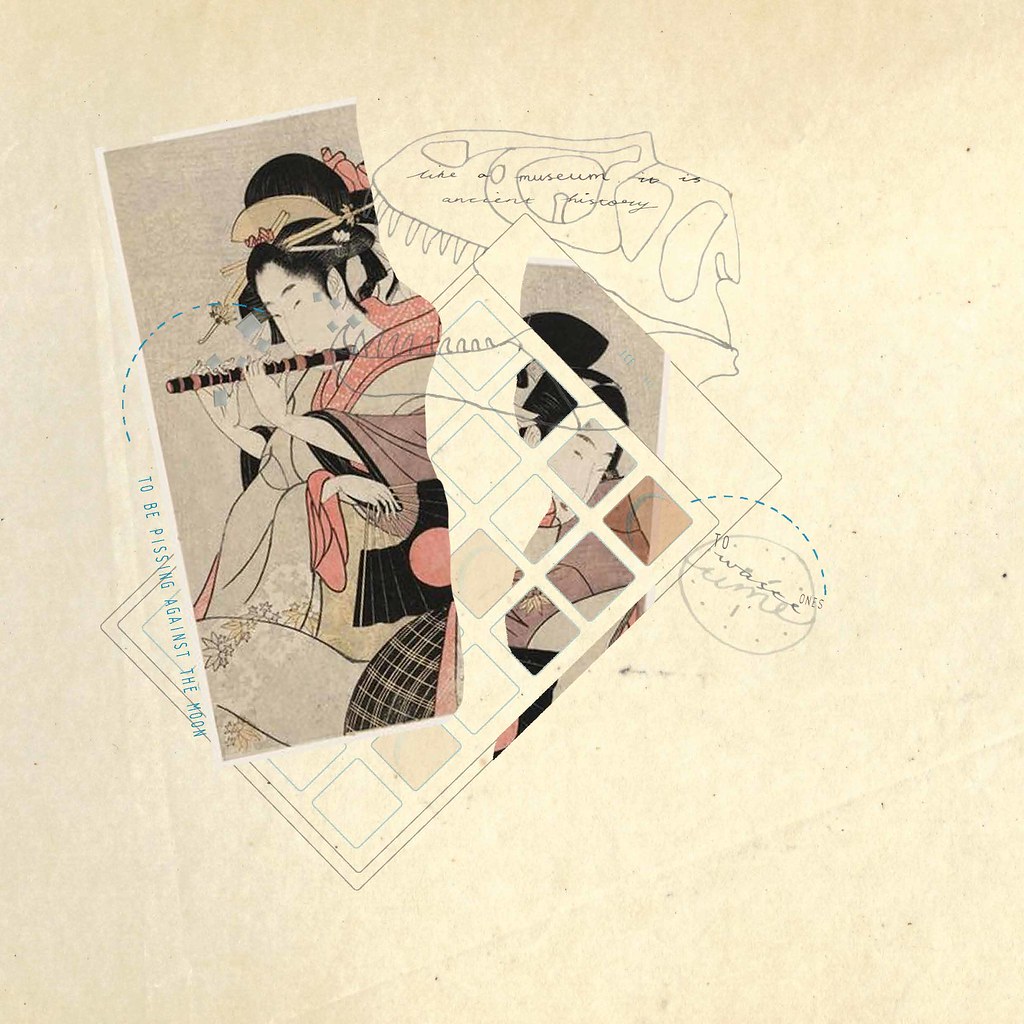 The photographs or even some of the linework, I tried to pair the ‘old’ with the ‘new’ whether it be a modern item such as lipstick, or an old tool used or image/photograph from the ‘past’. 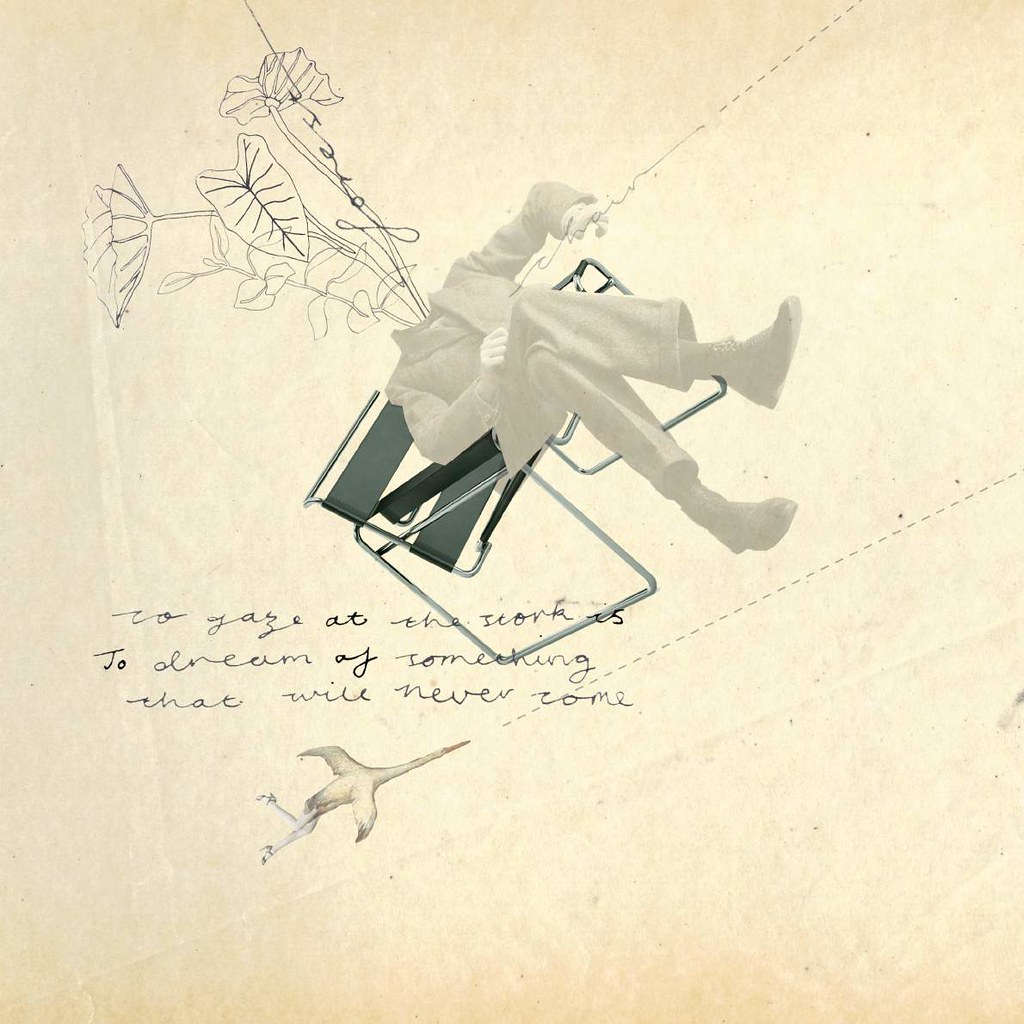 I wanted to incorporate a Ukiye-o painting in at least all of my hybrids and incorporate aspects from my diptychs, such as the pairings. 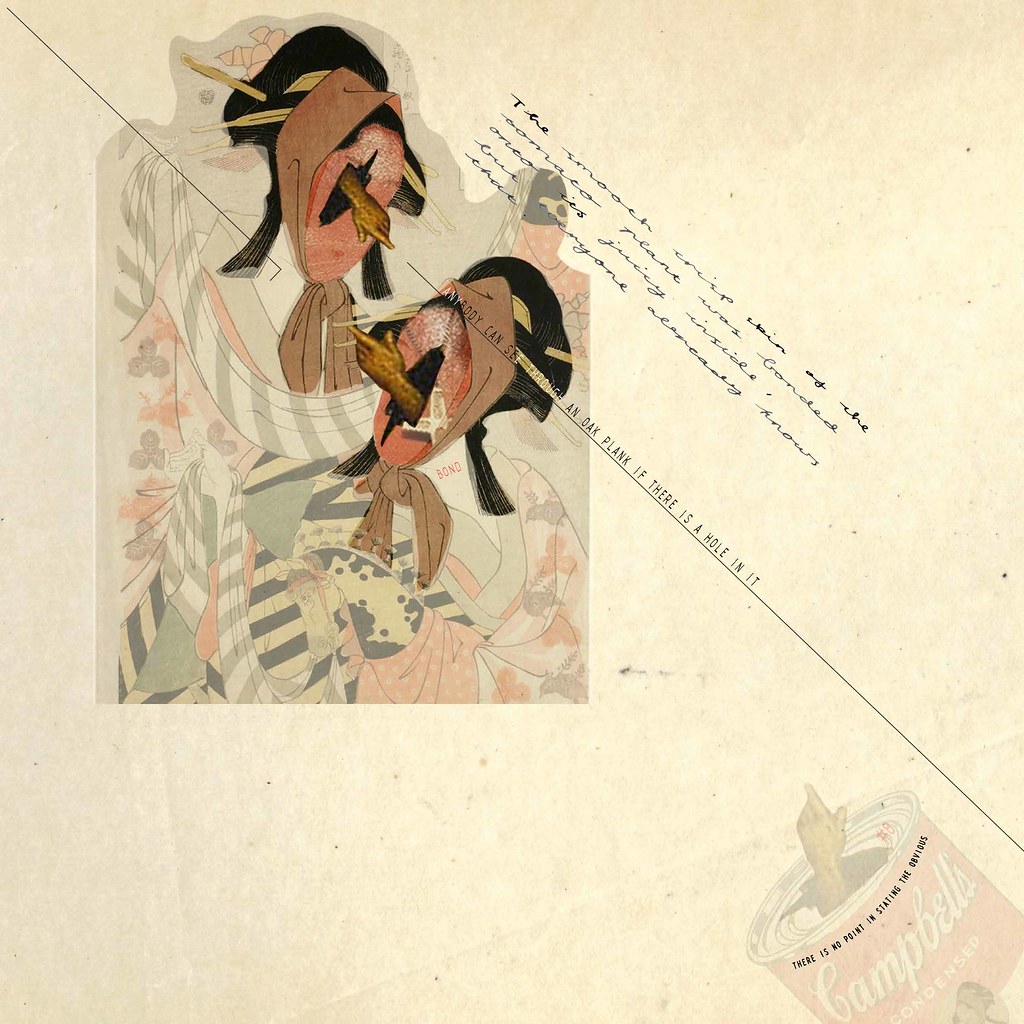 Each of the hybrids are driven by the various proverbs I have chosen, and I have combined them with aspects of the diptych and ukiye-o verbs.