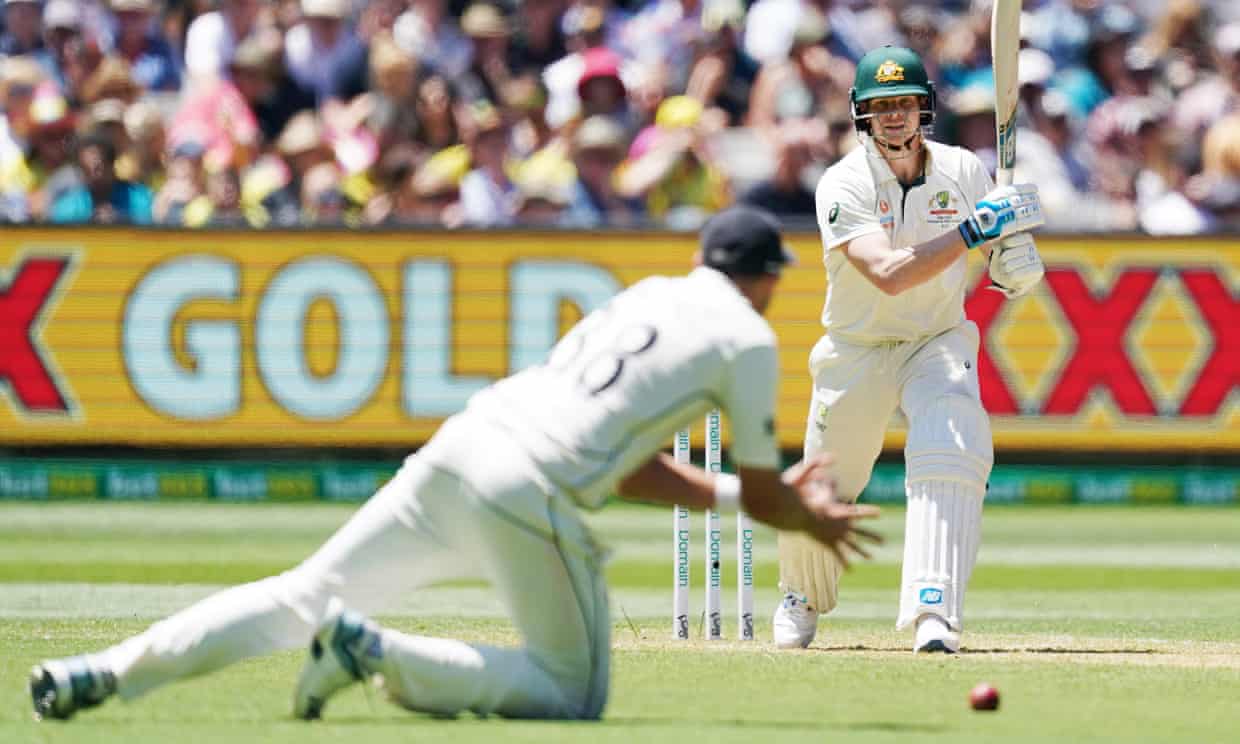 Steve Smith (right) of Australia bats on day one of the Boxing Day Test match between Australia and New Zealand at the MCG in Melbourne on Thursday. A new report says in the future the Test may need to be played at night or in the shoulder season to escape extreme heat. Photograph: Michael Dodge/EPA

The Melbourne Boxing Day Test may have to be played at night or moved away from Christmas to November or March as the number of extreme heat days rises over coming decades, a new report says.

The analysis by the Monash Climate Change Communication Research Hub says the climate crisis is already disrupting Australian cricket, citing the cancellation of club matches on hot days and the abandonment of a Big Bash game in Canberra after bushfire smoke reduced air quality and visibility.

The report, commissioned by the Australian Conservation Foundation, says the impact is expected to grow along with the number of days of extreme heat in Melbourne through the 2020s and beyond.

Paul Sinclair, the ACF’s campaigns director, said climate change loomed over this cricket season. There were calls for the starting time of the Perth Test match between Australia and New Zealand to be delayed due to a run of 40C-plus days and New South Wales and Queensland players were blanketed in smoke in a Sheffield Shield match at the Sydney Cricket Ground that prompted former Test player Steve O’Keefe to say Cricket Australia should intervene in future.

New Zealand’s preparation for the second Test starting in Melbourne on Boxing Day was curtailed when the first day of a scratch match against a Victorian XI was cancelled last Friday as the temperature reached 43.5C.

The report says continuing to play the Boxing Day Test in its current format will expose players and fans to unprecedented levels of extreme heat and, if effective action to limit climate change is not taken, consideration should be given to moving the Test to the shoulder season.

“Moving the event isn’t the only option, but alternatives come with their own risks,” the report says. “Because radiant heat is a significant factor in heat stress, night Tests could lower the heat stress risk to players and others, but there may be logistical, cultural or safety challenges involved in this.”

Asked for its response to the suggestion the Boxing Day Test might be rescheduled, Cricket Australia said cricket was played in different climates and countries around the world and it was committed to both addressing the impact of climate change and ensuring cricket continued to be played in Australia on December 26 for many years to come.

Sinclair said cricket depended on the weather in a way few other sports did as changes in temperature and rainfall affect pitch condition and ball movement. He called on cricket authorities to “champion the national and international action needed to combat the root causes of climate change”.

“Cricketers from grassroots clubs across the country to those in the national squad need Cricket Australia to speak up for climate solutions that match the scale of the problem facing the game we love,” Sinclair said.

The report suggests the conversation about cricket and heat is starting to change, giving the example of the hospitalisation of England captain Joe Root with dehydration and viral gastroenteritis in January 2018 as temperatures hit 42C. It prompted former Australian cricketer Dean Jones to say extreme heat was a workplace issue, and games should be called off on days that reached 41C.

It says extreme heat is a major health hazard for cricketers as it disrupts the body’s thermoregulation. Heat stress can initially cause muscle cramps, profuse sweat, thirst and fatigue. As players move towards heat stroke, people could feel chills and have ner

The report applauds Cricket Australia for last year publishing the cricket world’s first heat stress management policy, but says the organisation declined to say how often it had been used or whether it supported Australia moving to net zero greenhouse gas emissions or 100% renewable energy.

A Cricket Australia spokesman said it had been closely monitoring temperatures, air quality and visibility this summer and found it had “certainly brought about new challenges”. It said the executive team was in the early stages of developing a “strategy for sustainability”, and the organisation was conducting and had published research into best practice in dealing with a changing climate.

“Armed with this evidence, CA will continue to lobby the International Cricket Council to adopt these approaches for international tournaments,” it said. “Players’ and officials’ health at all levels of cricket is the absolute priority of Cricket Australia.”

At a community level, it said it had recommended matches be postponed or cancelled if temperatures reached a maximum designated by local authorities.

The report mentions in passing the bushfires that have recently smothered Sydney and other centres in smoke up to 11 times the hazardous level. Men’s and women’s Sydney grade matches have been called off in recent weeks, with paramedics called to at least one game.

Cricket Australia has said it is preparing for smoke to affect play during the Test match starting at the SCG on 3 January. Its head of operations, Peter Roach, said International Cricket Council regulations allowed officials to stop play due to smoke as they would due to rain.

Scientists say the scale and impact of the fires is unprecedented, and that the climate crisis is exacerbating the risk and lengthening the bushfire season. More than 5m hectares has burned across the country.

At a grassroots level, the report gives the example of Red Cliffs Cricket Association in Mildura, north-west Victoria, where the average daytime January temperature has increased 2.7C over the past 40 years. On average, 5.5 more January days are hotter than 38C than in 1980.

Peter Kelly, the Red Cliffs Association secretary, said over the past four years there have been about four days when cricket has been called off due to heat.

“We now play shorter games in January and have taken one of the Saturdays out because of the hot temperatures we’ve had for the past few years. It’s getting that consistent,” he said.

Temperatures in Melbourne this Boxing Day Test are forecast to range from 20.5C recorded on the first day to 41C on Monday, should it last that long.