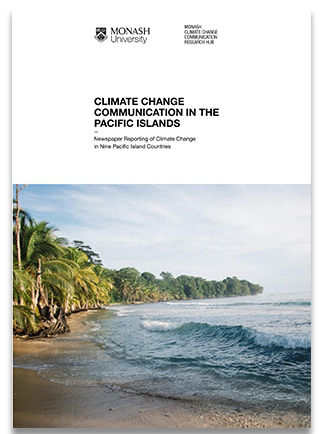 Unlike Australian content analyses which have found politicisation and debate in the media, pacific island coverage of climate change had no cases of denialism found over 27-month study period.

Climate change was discussed in 13.8% of overall reporting. However, despite a number of significant cyclones in the region, only 5% of articles discussing climate change linked it to disasters. In all cases this link was made months after the event and the link between climate change and disasters was not clearly explored.

Coverage of climate change was primary focused around political events with politicians being the primary communicators, however scientists and NGOs also featured in a significant percentage of coverage.

Effective climate change communication depends on information being both understood and meaningful to the audience, overall most Pacific Island coverage demonstrated in-depth and accessible reporting.