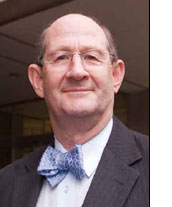 The Biblography is updated via the Monash Research Online Profile Enquiry Service. Click the Publications tab.

Professor Napier Thomson was Head of the Monash University Central Clinical School based at The Alfred Hospital in Prahran 2001-2011. His research history and current activity is in renal (kidney) medicine. He has been teaching medical students in Monash University since 1976.

Professor Thomson is currently Director of Renal Medicine at The Alfred and until 2007 was also Director of the Department of General Medicine (which Department he developed). Until 1998 he served as the Faculty’s Associate Dean (Clinical). He has also mentored many early career doctors through the Royal Australasian College of Physicians, and became President of the RACP in 2006.

Since Professor Thomson’s appointment as Professor of Medicine at the Medical School at the Alfred, the Department has developed its research program to include the major areas of respiratory medicine and lung transplantation, infectious diseases, diabetes, neuroscience, haematology (ACBD) pharmacology of heart failure allergy, and renal disease. See Medicine PhD, Honours Science and Bachelor of Medical Science students enrolled through the Department at the CCS HDR Student page.

In June 2009, Professor Thomson was appointed a Member of the Order of Australia for services to medicine, research, medical education and professional associations and in 2010 he received the David de Kretser Medal, awarded for outstanding contributions to the Faculty of Medicine, Nursing and Health Sciences at Monash University.