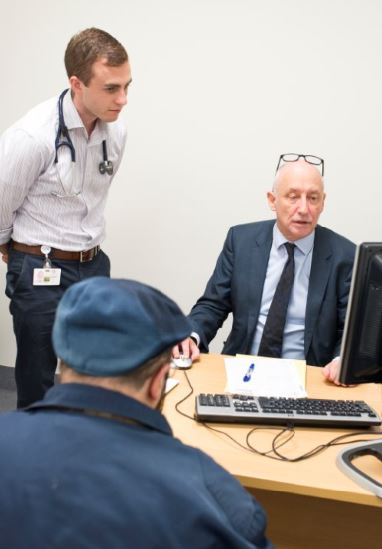 Professor Mark Cooper and colleague with a patient.
Share

Changing the way we treat diabetes and its complications

Since the discovery of insulin over 90 years ago and a number of oral tablets after the second world war there was very little change in the treatment of type 2 diabetes till the last decade.  In the last 10 years there have been dramatic improvements in the way we treat type 2 diabetes also known as maturity onset diabetes, a condition that has become arguably the largest worldwide epidemic as the world has industrialised with increasing obesity and reduced exercise.

Fortunately these new treatments have less side effects and recent trials over the last 18 months suggest that these new drugs may also reduce some of the most important complications associated with diabetes including heart and kidney disease.  This lecture will review the new ways that we are managing diabetes and emphasise the potential benefits that these new treatment strategies could yield in terms of reduced mortality and a decrease in the major burden of diabetes and its complications.

Professor Mark Cooper AO is inaugural Head of the newly established Department of Diabetes at Central Clinical School (CCS). Prof Cooper is a senior endocrinologist with an active clinical practice at the Alfred in addition to his substantial research activity. His research interests are in diabetes and its three major complications: kidney disease, heart disease and blindness. Mark was the Chief Scientific Officer of the Baker Institute. The department has a broad range of translational research investigating both causes and clinical therapies for diabetes and its complications.

About diabetes and its complications

The World Health Organisation says that "It is no exaggeration to describe diabetes as one of the major contributors to ill health and premature mortality worldwide." Major microvascular complications of diabetes include heart disease, blindness and kidney disease. Diabetes is the most common cause of adult blindness in developed countries, either due to retinopathy, cataracts or glaucoma. People with diabetes are 17 times more prone to kidney disease, and 2-8x more likely to suffer cardiovascular disease and events than people without diabetes. Diabetes has been described as "one of the most challenging health problems in the 21st century". (Zimmet et al, 2014).