The evolution of the Centre for Obesity Research and Education

The Centre for Obesity Research and Education (CORE) was initially established as a way of encapsulating research and educational activities in the area of obesity within the Monash University Department of Surgery. Since its original inception in 2003, CORE has evolved significantly and is now an independent research centre within the Faculty of Medicine, Nursing and Health Sciences.

CORE is structured around a proposal detailing the business case and governance structure which was developed after consultation with key stakeholders and potential academic collaborative partners. This proposal defined the structure and relationship of the Centre according to the University’s statutes and was approved by Council of the University in December, 2003. 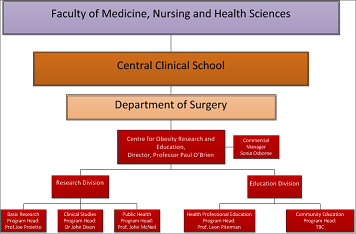 A strategic planning day with key research and professional staff of CORE in late 2010 resulted in a revision of the centre's mission statement and organisational structure, as well as developing a plan for the future in terms of areas of research focus, collaborative opportunities and resouces. These items were presented to and approved by CORE's Scientific Advisory Board in early 2011.