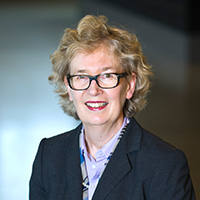 Monash University’s Professor Christina  Mitchell, from the Department of Biochemistry and Molecular Biology, has  won the 2015 Lemberg Medal.

Professor Mitchell, Dean of the  Faculty of Medicine, Nursing and Health Sciences and Academic Vice-President at  Monash University, was announced as the winner today by the Australian Society  for Biochemistry and Molecular Biology (ASBMB.)

The Lemberg medal is awarded to  an individual who has demonstrated excellence in Biochemistry and Molecular  Biology and who has made significant contributions to the scientific community.  The medal is presented in memory of Emeritus Professor M.R.Lemberg, who was the  ASBMB’s first President and Honorary Member. Professor Mitchell is a distinguished  member of the ASBMB.

"I am very honoured to receive this award  named after Professor Lemberg, who contributed so much to biochemistry,"  Professor Mitchell said.

Professor  Mitchell's work for the last twenty years has focussed on characterising the  function of unknown genes that regulate cell proliferation and growth and, when  mutated or deleted, lead to human disease. Recently, her laboratory discovered  that one of  the 4-phosphatase family members, INPP4B, functions as a tumour  suppressor in breast cancer, where its loss occurs most frequently in  aggressive basal-like subtype breast cancer and may therefore represent a breast cancer prognostic marker.

Her team's most  recent discovery, published in Cancer Cell, discovered  an entirely new breast cancer gene, called proline-rich inositol polyphosphate  5-phosphatase, or PIPP. PIPP is responsible  for triggering the disease and  increasing the growth of the primary tumour as well as having a role in  regulating metastasis, the main killer in most cases. This discovery paves the  way for the development of therapies that target the early stages of breast cancer.

Professor  Mitchell has received many accolades over the years for her work. Previous  awards include the Monash Vice-Chancellor's Award for Distinguished Postgraduate  Supervision and the Dean's Prize for Excellence in Research in the Medical  Faculty at Monash  University. In 2008, Professor. Mitchell was made a Sir John  Monash Distinguished Professor, one of only five appointees in the last 20  years and the only female, and she was also a recipient of a Monash University  50th Anniversary Research Award in the same year. In  2013 Prof Mitchell was awarded an Honorary Degree in Medical Science from The University of Melbourne.  In 2015, she was inducted into the Victorian Honour Roll of Women, which acknowledges  and pays tribute to women from across Victoria who have succeeded through  vision,  leadership, commitment and hard work.

For more information about the 2015 Lemberg medal recipient, click here.