New  research led by a team of scientists from Monash and the University of Bristol  has resulted in the development of a blueprint that will eventually allow  clinicians to routinely turn cells in the human body into tissues that are  needed to treat disease. Applications include turning skin cells into cells of  the arteries and veins to treat people with diabetes or heart disease. The  study, published today in Nature Genetics, overcomes what has been one  of the main barriers to regenerative medicine therapies - the pace in which we learn how to make different cell types.

The  research by scientists at Monash University in Melbourne (Australia), the  University of Bristol (United Kingdom), Duke-NUS (Singapore) and Riken (Japan)  also means that the growing of whole organs from human cells in the lab may  well be fast tracked.

Associate Professor Jose Polo, from Monash University’s  Biomedicine Discovery Institute and the Australian Regenerative Medicine  Institute, is a stem cell biologist who, at a conference in Canada last year,  began talking with Dr. Owen Rackham, a computational scientist working in the group  of Professor Julian Gough from the University of Bristol. They rapidly realised  that both groups had the same goal – but from different perspectives: what makes a particular cell type that cell type? What makes a cardiac muscle cell different  from a cell of the pancreas? What determines this? How can we change any cell  into any other cell type?

In 2007, human iPS cells were discovered. Made  from skin, iPs cells appear to have the characteristics of embryonic stem cells  meaning they can theoretically be turned into nerve, heart, liver or other  types of cells and transplanted to repair damaged organs. The discovery electrified  scientists because the cells seemed to have two big advantages over embryonic  stem cells: they were not controversial, because their creation did not entail  the destruction of human embryos and, since the stem cells could be made from a  particular patient’s skin cells, they could be used to make tissues that would  not be rejected by that patient’s immune system.

The  discovery of iPS cells boosted the “reprogramming field”, or the science of  converting one type of cell into another cell type. However, according to  Associate Professor Polo, the field has been moving slowly, essentially because  while it is known that certain factors can turn a cell of the skin into iPS  cells or a few other cells - it could take years of testing to determine which  cocktail of factors is needed for producing other cell types from iPs cells.

At  the University of Bristol, Professor Julian Gough and Dr Owen Rackham, now at Duke NUS Graduate Medical School in Singapore, had been developing a predictive  model (called Mogrify) for converting any cell type into other cell types.

At  the same time at Monash University, Associate Professor Jose Polo and PhD student Jaber Firas had been working on the  mechanism that governs such cell conversions.

“It  was a match made in heaven,” Associate Professor Polo said. Working together as  a big group scattered across the UK, Singapore and Australia, they were able test  the algorithm in cell cultures and further improve it to create a predictive  tool that they believe will shorten the time to discover how to create any cell  type from years to months.

“Using  Mogrify, we found that it took us as little as four months to map the fate of a  fibroblast cell turning into an endothelial cell, a process which under the  current “trial and error” model of putting in different factors – could take several  years,” Associate Professor Polo said.

Mogrify  will allow scientists to select the type of cell they have, the type of cell  they want to turn it into “and Mogrify suggests the factors needed to make that  happen, in much the same way you put departure and arrival information into an  airline booking. It’s as simple as that,” he said.

Associate  Professor Polo predicts that “in the future Mogrify will allow clinicians to  treat diseases like diabetes and Parkinson’s or even other conditions such as severe  burns by making new skin in the patient”.

For  those wanting to read the full paper in Nature Genetics, click here. 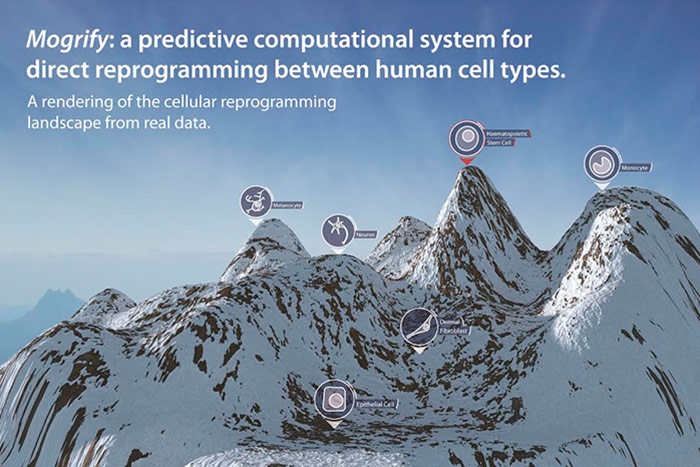 Caption: This image is a graphical rendering of a map of the  transcriptional signature of human cell types taken from Rackham and Firas et  al. 2016 Nature Genetics (supplementary figure 2). Human cell types are positions on the surface; the coordinates are derived from expression profiles  in combination with reprogramming potential between types as generated by  Mogrify (http://mogrify.net). Image created by Cherrie Kong.

The newly established Biomedicine Discovery  Institute at Monash University is committed to  making the discoveries that will relieve the future burden of disease. Bringing  together more than 100 internationally-renowned research teams, our researchers  are supported by world-class technology and infrastructure and partner with  industry, clinicians and researchers internationally to enhance lives through discovery.