Oxygen may be crucial to preventing kidney disease after cardiac surgery 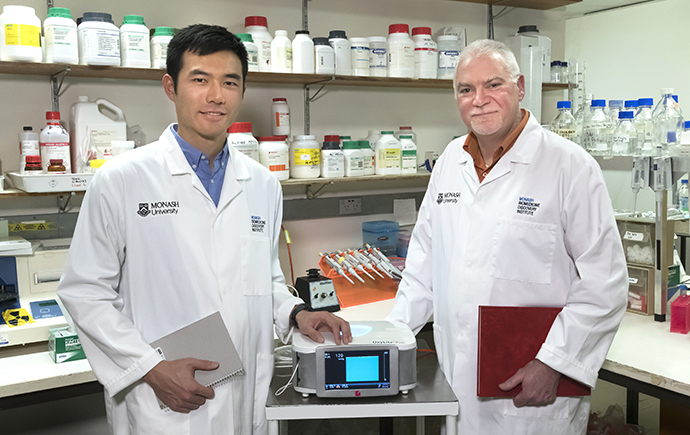 Nearly one in three patients having cardiac surgery develop acute kidney injury (AKI) afterwards, greatly increasing the chance of dying in hospital or the risk of developing chronic kidney disease later. To date it has not been possible to assess the risk of AKI during an operation or to prevent it from happening.

A multidisciplinary team, led by Monash Biomedicine Discovery Institute’s (BDI) Professor Roger Evans, has found a link between post-operative AKI and low amounts of oxygen in the kidneys during surgery, as measured in the urine.

The team hopes the technique they developed to identify patients who have poor renal oxygenation will eventually lead to interventions to reduce the risk of the disease. Their study, published in Nephrology Dialysis Transplantation, is the preliminary report of a larger project to finish by the end of the year.

The team, consisting of researchers from the Monash BDI and the School of Clinical Sciences, and clinicians from Monash Health, first drew the link between urinary hypoxia (lack of oxygen) and open-heart surgery associated AKI after using mathematical modelling to simulate the surgery.

sterilised optical fibres into a bladder catheter so that the sensing tip of the probe was in direct contact with bladder urine. The tip of the probe fluoresces when excited by a pulse of light. The fluorescence lasts longer when there are lower levels of oxygen; the technique is called fluorescent lifetime oximetry.

“We believe that the kidney is starved of oxygen during open heart surgery, at least in some patients, and that this is a major cause of their acute kidney injury,” Professor Evans said.

“This is the first method that has been available to assess the risk of patients getting AKI after surgery, during the time they are in the operating theatre,” he said.

“There are other methods that can be used to assess their risk once they get into intensive care after the operation, but given that the damage is done in the operating theatre we think that’s too late.”

“We feel we’ve gone a long way towards solving one of the two problems that have made cardiac surgery associated acute kidney injury a huge clinical problem – an early warning when the patient’s still in the operating theatre – our next challenge is finding how to do something about it.”

The researchers hope to conduct a clinical trial to establish the amount of blood flow needed during cardiac surgery for safe amounts of oxygen to be delivered to the kidneys.

“Acute kidney injury can have pretty devastating effects on the prognosis of patients who have cardiac surgery,” Professor Evans said.

“My hope is that what we’ve found is going to change practice in the long run – but we’ve got a long way to go,” he said.

“Acute kidney injury is very common after major heart surgery. At the moment there is little that we can do about it. A way to detect it early and hopefully prevent its course will greatly improve patient outcomes - we hope our technique will help to achieve this,” Dr Zhu said.

The research team includes mathematicians, surgeons and other medical specialists, and experimental physiologists. The first two authors, Dr Michael Zhu and Mr Andrew Martin, conducted the research as part of a research year (Bachelor of Medical Science - Honours) during their medical degrees at Monash.

The clinical component of the project was made possible by the enthusiastic support of cardiac surgeons Associate Professor Andrew Cochrane AM and Professor Julian Smith, Head of the Department of Cardiothoracic Surgery at Monash Health and Head of Monash University's Department of Surgery.