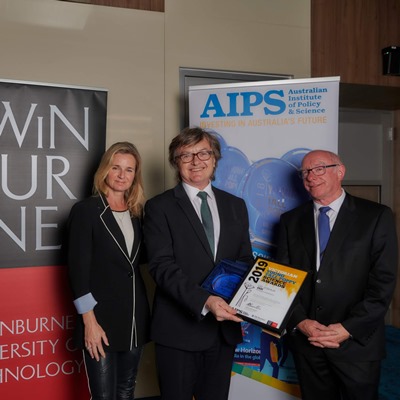 Dr Joshua Ooi from the Centre for Inflammatory Diseases is the recipient of a 2019 Victorian Tall Poppy Science Award for his outstanding achievements in the area of autoimmune diseases.

Established by the Australian Institute of Policy and Science, the Tall Poppy Awards give recognition to our young researchers, both for their work and commitment to promoting science and innovation within the community.

Dr Ooi has been an active contributor in his community where he regularly volunteers his time to local primary schools, educating students on medical research and instilling an imagination for the sciences. He has played a significant role as an organiser and speaker at the ‘Day of Immunology’ celebration events which focus on engaging the general public with medical research. Dr Ooi was also recently selected to be a part of the Australia-China Young Scientist Exchange Program where he presented to Australian and Chinese diplomatic officials and highlighted the importance of international scientific collaborations.

Dr Ooi’s research focuses on the treatment of autoimmune diseases and seeks to understand why the immune system becomes misdirected, so that this knowledge can be used to develop new therapies that target the cause of disease without compromising protective immunity or inducing side effects.

Autoimmune diseases, such as lupus, rheumatoid arthritis and multiple sclerosis occur when the immune system attacks the body’s own cells, tissues and organs. These diseases affect more than one million Australians, and hundreds of millions worldwide. There is no known cure

Dr Ooi and a team of researchers recently uncovered why some people are protected from autoimmune disease. They found that protection from disease is conferred by specialised cells called regulatory T cells that can stop the immune system from attacking parts of its own. Patients with autoimmune disease lack these cell types.

Now, using genetic engineering tools, Dr Ooi is developing a new therapy that allows for the introduction of these specialised regulatory T cells into patients with autoimmune disease. This new therapy has the potential to transform the way autoimmune diseases are treated and restore the lives of many patients.

SCS Head of School, Professor Eric Morand, who nominated Dr Ooi and was on hand to accept the award on his behalf, said Dr Ooi was exemplary of a Tall Poppy Science Award. “Dr Ooi is an outstanding innovator, dedicated worker, and emerging leader - just the qualities of a Tall Poppy awardee, and we are all very proud to have him in SCS.”

Speaking about his achievement, Dr Ooi said he felt happy and honoured to win the award. “It's an opportunity to shine a spotlight on the research work we do in trying to develop cell-based therapies for autoimmune diseases.”