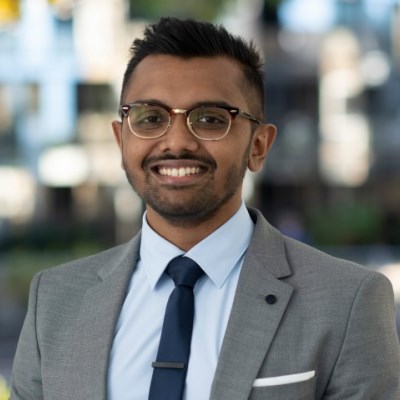 Dr Selvaratnam received the Aldo Vacca Award for Best Free Communication which was presented for his research investigating the detection and management of fetal growth restriction in Victoria.

Though detection of fetal growth restriction has improved over time, with an associated reduction in stillbirth rate, it has come at a cost of inappropriate early delivery of normally grown pregnancies.

Dr Smith, who received the Best Static Poster, presented his findings of the first-in-world wearable device, FetalKicks, which allows continuous tracking of fetal movements in pregnant mothers. In the pilot, Dr Smith demonstrated that FetalKicks was as good as the mother in coupling with heart rate accelerations in the fetus.

On receiving his award Dr Smith said, “It is a tremendous honour for our team of clinicians and engineers working on this as it validates all the work we have put in to developing this exciting new technology. A lot of credit has to go to the engineers for their support in making this a reality. We remain excited at the possibilities that this can open up for the monitoring of mothers and their babies during pregnancy.”

The awards were presented by Dr Vijay Roach, President of RANZCOG.