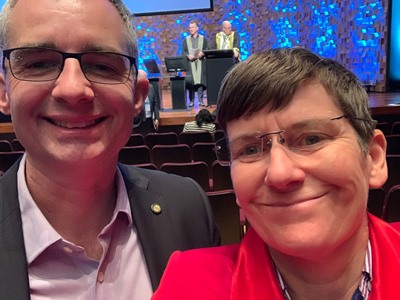 Congratulations to Emergency Department staff (School of Clinical Sciences at Monash Health and Monash Health)  on their recent successes at the Australasian College for Emergency Medicine (ACEM) Annual Scientific Meeting held in Hobart from 17-21 November.

The following staff received awards at the College Ceremony held as part of the event.

The Department of Paediatrics, Dr Simon Craig, received an International Development Fund Grant of $15,000 for his project “The Monash Children’s Hospital Paediatric Emergency Medication Book: Improving management of paediatric emergencies in Latin America.” IDF grants are intended to promote the development of emergency care in developing countries through teaching, training and capacity building.

Professor Diana Egerton-Warburton, Adjunct Professor in the School of Clinical Sciences and Director of Emergency Medicine Research at Monash Medical Centre, received the ACEM Distinguished Service Award along with MMC colleague, Dr David Lightfoot. The award, which was established in 2018, recognises the provision of service to an area of College activity over a period of time.

Professor Egerton-Warburton has been extensively involved with ACEM for over two decades having held roles on the Primary Examination Committee, and as chair of the Trainee Selection Committee. She has also received several ACEM awards, including the Morson Taylor Research Award in 2009 and the Teaching Excellence medal in 2013. Professor Egerton-Warburton was also one of the keynote speakers at this year’s meeting.

Dr Lightfoot has also dedicated many years of service to the College, predominately in the fields of assessment and examination.  Upon receiving his award Dr Lightfoot said, “I am deeply honoured to receive the award. I have thoroughly enjoyed my work for the College throughout my career and believe it has helped me to become a better clinician. It has given me great pleasure to watch trainees work through and complete their training to become Emergency Physicians leading and delivering emergency care in Australasia.”