The year in Orbost that made the doctor

Dr Kane Treble is quite happy to tell you that the year he spent as a medical student in Orbost made him the doctor he is today. 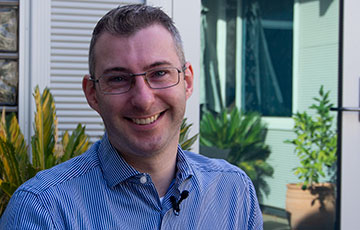 Now he splits his time between teaching Monash medical students in Mildura, working as an emergency registrar at the hospital and looking towards a career in general practice.

“I did take the scenic path,” he says of his journey to a career in medicine and Orbost was only a small - albeit pivotal - part of it. A degree in biomedical science was followed by an honours year in biochemistry and molecular biology - “Which isn’t as cool as it sounds,” he declares. Finding he enjoyed research, he then embarked on a PhD. “Fortunately that didn’t go through so I decided to try something different.” For three years he worked as a paramedic with the Ambulance Service in New South Wales. “I kept dropping off patients to the hospitals and thinking: Geez - that next bit looks more fun,” he remembers. So he applied to do medicine at Monash.

As a graduate entry student, he spent the first year of the course in Churchill in Gippsland. By then he had seen much of Australia. He and his two brothers (he was one of triplets) had moved frequently with their mother for her work. “I just always preferred the country. And particularly going through my training at Monash in Churchill and spending a lot of time in the Gippsland region, I kind of always knew I wanted to continue practising in a rural location,” he says.

After graduation, he went back to Melbourne to “find out what all the sub-specialities were about” and ended up working for Monash Health for several years before deciding that he wanted to go back to the country. His wife had family connections in Mildura so they moved there two years ago, fell in love with the town and now plan to stay.

She too is a Monash medical graduate. “We actually met in our first PBL [Problem Based Learning tutorial] in our first year in Churchill,” he remembers. They spent the year in Orbost together. “We started off as friends and the rest is history,” he says. “We’ve now got a baby; he’s about to turn one.”

One of the first stops when they arrived in Mildura was the Monash clinical school. “We came and introduced ourselves and have been teaching ever since.”

Why take up teaching? Excellent question, he says, pointing out that the Latin root of the word doctor is “docere” meaning to teach. “Our fundamental role as doctors is to teach,” says Dr Treble. “To teach each other, to teach our patients, to educate ourselves. We’ve always had it drilled into us that a big part of getting all this training and knowledge is to pass it on.

“It was something I always found really rewarding. And it’s also a fantastic way top keep yourself up to date as well. Because teaching others you have to go through and make sure you know what’s up-to-date.”

What would he say to students unsure about doing a rural or regional placement? “Just do it,” he says grinning. “It's a fantastic phenomenal experience that will give you exposure and experience outside anything that I think you'll get from a metropolitan site. You might not have all the sub-specialities but, particularly while you're a medical student, you should be covering your bread and butter, your everyday presentations and build up that other experience down the line. You've got the rest of your career to jump into that whereas when you're thrown into the deep end in the country sites and given the responsibilities, given roles, given exposure it will make you the best doctor you can possibly be.”

He knows that from experience.