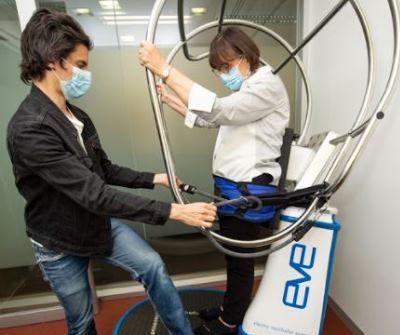 Honours student Sahan Muthuhetti earned a High Distinction for his project on outcomes for people with Parkinson's disease who used the Reviver, an exercise assistance device for mobility-impaired individuals.

The Reviver is an innovative exercise assistance device which allows mobility-impaired individuals to exercise far beyond their unassisted capacity. Monash University Central Clinical School researchers are performing the world's first clinical trial of the device to assess its impact on symptoms of Parkinson's Disease, such as impaired balance and mobility.

During 2020 Dr Ben Sinclair, [pictured right with a participant] who runs the Reviver trial, together with Professor Meng Law, Director of the iBRAIN group, co-supervised a very talented Honours student, Mr Sahan Muthuhetti. Sahan got a high distinction for his Honours project, "Treatment of balance associated symptoms of Parkinson’s Disease using a novel rehabilitation strategy".

Dr Sinclair said, "I'm so pleased Sahan got a high distinction, because he deserved it. He needed to pick up a lot of different skills, and practically took over running the project when I got stuck in England earlier this year!" [Ben returned to England during the year and with all the travel difficulties, was there for longer than anticipated].

Sahan plans to work in research for the next year, then apply for medical school.

This year I undertook an Honours year at the Central Clinical School at Monash University. I was able to be involved with the Parkinson’s Rehabilitation trial funded through the Innovations Connections grant funding scheme from the Australian Government Department of Industry, Innovation and Science, and run in association with Alfred Health. I was given this opportunity by Dr Benjamin Sinclair and Professor Meng Law.

During the year I was involved in performing the intervention sessions for the trial with the Reviver machine and analysing whether we could see an improvement in balance over the course of a 12-week intervention period for each patient involved. This gave me the chance to work alongside patients with Parkinson’s disease during the year. This was the most rewarding experience from the year I believe, because I was able to make a difference in these patient’s lives.

Furthermore, my passion for working in the Neurology field and specifically with Parkinson’s Disease stems from my family background. My grandmother was diagnosed with Parkinson’s around 10 years ago and because a disease modifying treatment was not available, I wanted to work in the research field and specifically with the Reviver trial. I felt that I was providing care that would otherwise not be possible specially in difficult times as those we faced this year.

With regard to the outcomes of this 12 week intervention we were unable to determine an exact improvement in balance, and it was concluded that while it may be possible to improve balance, a clearer trend could be seen through testing of strength or stride of these patients which are also affected by this progressive neurodegenerative disease.

I also undertook a secondary study which concentrated on optimising and analysing the best method to use when employing an inertial measurement unit (IMU) when analysing sway data. This study looked at both positioning of the sensor on the body of the individual and the best method of attachment to the individual, which would minimise noise and other movement artefacts that were not pertinent to the sway we intended to measure.

Optimisation studies such as this require further testing to determine an exact difference but a trend showed that when measuring sway it was more accurate to place the device on the sacrum of the individual with a direct attachment method such as the use of surgical tape rather than a band which would extend around the individual.

I want to thank the staff of the iBrain laboratory for giving up their time for me to carry out this experiment. It was a real pleasure and I am grateful that I was given the opportunity to work on this project under Dr Sinclair's and Professor Law's supervision and expertise. I would like to again mention that this project would not have been possible without the assistance of the staff members from the Department of Neuroscience and iBRAIN laboratory who helped me tremendously with the secondary project and carried out the outcome assessments for the Reviver trial.

I would like to end by saying that in the face of adversity, hard work and determination prevails and it is of paramount importance that we keep moving forward.