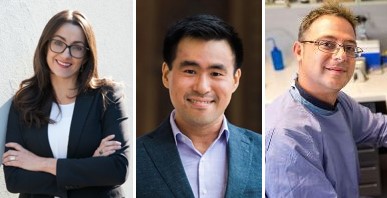 Multiple sclerosis (MS), a chronic degenerative disease interfering with the central nervous system’s ability to send messages from the brain to the body, is the most common neurological disease affecting young adults. It affects more than 25,000 Australians and is on the rise.

The Department of Neuroscience’s Dr Steven Petratos was awarded $226,790 over three years, while Associate Professor Anneke Van Der Walt was granted $265,630. Only three of these highly competitive translational grants were given out by the Trish Multiple Sclerosis Research Foundation. Dr Wei Yeh, also from the Department, won a Postgraduate Scholarship from MSRA for $42,560.

A total of $2.4 million in MS research grants were given to 19 new projects.

Dr Petratos’ project will provide the proof-of-principle studies in preclinical models necessary for a repurposed drug enhancing brain repair in MS-like disease to enter clinical trials in MS patients. The drug has been used previously to treat people with inherited neurological conditions.

If it is shown to be safe and efficacious in repairing degenerative parts of the brain, the fact that it has already been tested in clinical phase trials means a pharmaceutical company could immediately trial the drug in MS patient groups not responding to other therapies.

“The ultimate outcome of this study would be that the drug would promote repair or limit further neurological decline in patients with MS,” Dr Petratos said. “This means we could set up a first-of-its-kind trial. This sort of approach has never been attempted before, targeting oligodendrocyte cells in the brain the way we’ve identified targeting them.”

Dr Petratos and colleagues had previously published papers on the drug and had a patent issued for it, recently allowed in the US. “We’re going towards full patent which is very exciting,” he said.

He said he was “humbled” by the award. “We are now basically on a pathway to an exciting aspect of every MS researcher’s dream of trying to achieve a clinical translation for patients living with MS because that’s the ultimate aim for us,” he said.

Dr Nick Wong is co-investigator on the project.

Associate Professor Anneke Van Der Walt will use her grant to further work into home-based monitoring tools for people with MS, trialling them in four Melbourne clinics. The ‘Active MS’ project uses three apps to monitor such aspects as cognition, walking, memory and speech, and will examine with scientific rigour the ability of these tools to detect treatment failure or success quickly and accurately, and see if events signifying MS progression can be detected early.

“We need to make sure that we understand what we are measuring and evaluate how it complements other standard measures of neurological disease such as MRI and clinical examinations,” Associate Professor Van Der Walt said. “This grant allows us to do that. It could ultimately lead to us to completely change the way we monitor MS in patients.

“It’s a great honour to get the award,” she said. “The fact that we got it speaks to the critical need in the MS community for better monitoring tools.

“At the moment standard practice is to see MS patients twice a year for about 20 minutes,” she said. “There’s a huge amount of information we’re not actively collecting.

“Using apps has become part of daily life for most people and applying specially developed apps could become a normal part of monitoring MS.  This project allows people with MS to play an active part in their care.”

Dr Wei Yeh, also from the Department, won a Postgraduate Scholarship for $42,560.

Dr Yeh will investigate the effects of vitamin D on immune cells in people with MS, and how this is different in people without MS with a view to helping determine ways to prevent the development of the disease. His project will also investigate factors that might influence the risk of relapses during pregnancy to help clinicians minimise this risk.

“It is an honour and privilege to be awarded a Postgraduate Scholarship from Multiple Sclerosis Research Australia,” Dr Yeh said. “This award will help support me to further my research skills, and to find out new knowledge and insights on how multiple sclerosis develops.

“I hope that our research will help to further uncover how multiple sclerosis develops and the role vitamin D plays in this, and also inform strategies to minimise the risk of women having a relapse during their pregnancy, and after delivery," he said.