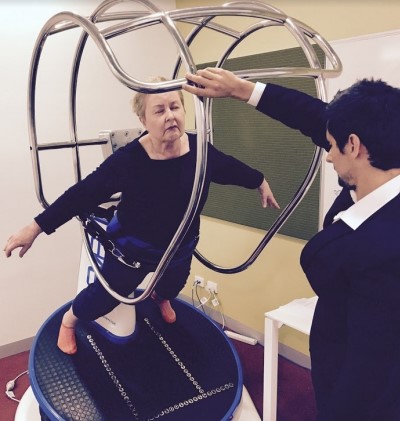 Monash University and The Alfred are testing an innovative new machine that could improve the symptoms of people with Parkinson’s Disease using gravity and movement.

The Reviver machine intentionally challenges participants’ sense of balance in a safe and controlled environment. The reaction to being tilted off balance creates a powerful and innate response that can activate muscle groups that have become disengaged.

The trial aims to determine whether a 12-week exercise program on the Reviver machine (technically known as a vestibular-stimulation, isometric exercise machine) can lead to improved balance, mobility and sensory-motor coordination for people with an advanced stage of Parkinson’s Disease and Atypical Parkinsonism.

The trial is being overseen by Professor Terry O’Brien, neurologist and Head of Department of Neuroscience at Monash University. The lead researcher is Dr Ben Sinclair, a brain imaging expert from Monash University and Alfred Health. Dr Sinclair says he has a long-standing interest in non-pharmacological treatments for Parkinson’s disease and other brain disorders.

Early anecdotal feedback suggests the Reviver machine may improve mobility and reduce Parkinson’s symptoms in users. In “timed up and go” tests where people had to stand up from a chair, walk 3 metres and back, then sit down, the average patient completed the task in 13 – 10 seconds. After only a few sessions on the machine, some patients could accomplish the task in 8-9 seconds.

There are approximately 80,000 people living with Parkinson’s Disease in Australia, with one in five of these people being diagnosed before the age of 50.

Geoffrey Redmond developed the Reviver technology after noticing the deterioration in his elderly mother’s health. It prompted him to think about how exercise could be used in its simplest form to help her.

“We’re really glad to see the Reviver being used in a formal trial,” said Redmond. “The anecdotal results with our patients have been very positive. We’re proud to see it being tested by the world-leading team at Monash and The Alfred and are very keen to learn the results.”

The trial is seeking to recruit 30 patients diagnosed with moderate to advanced stages of Parkinson’s Disease or Atypical Parkinsonism. The participants will need to attend twice-weekly sessions at The Alfred for a 12-week period.

The trial participants will be separated into two groups, based on their diagnosis. Half of each group will undertake exercise according to the Reviver regime, in addition to their regular standard of care. The other half will continue their standard of care without use of the machine. Results from groups who used the machine will be compared to their control group counterparts.

People interested in participating in the trial should call 02 9524 2188 or email enquiries@isodynamics.com.au

The research study is funded by an Innovations Connections Grant from the Department of Industry, Innovation and Science.

For more information about the technology visit www.isodynamics.com.au