The first intake – sixty years on

The very first cohort of Monash medical students were a tight-knit bunch. Dr Christine James (nee Crane), one of this original group, tells us of her life in those early years, her inspiring peers, and the opportunities that opened up for her in her long and happy career.

Christine was raised in Tasmania and studied a number of first year science subjects at the University of Tasmania, which had no medical school at the time, before transferring to Monash as one of the first group to graduate in Medicine in 1966.

“We were aware that we were a special and pioneering group and our teachers were young and keen to help prove that Monash was unique and could produce students with the potential to excel in any field of medicine. They stressed that we would continue to learn throughout our careers.”

“I already had nine friends from Tasmania, including one woman, and we all merged gradually with the second year Monash students,” Christine says. “We women students often shared time together but not exclusively. I was never aware of any discrimination among our fellow students.”

Christine speaks warmly of her fellow women students. In particular, a mature-aged student, Linda Brightford, who at 37 seemed so much older that Christine found it hard to call her by her first name. “Family responsibilities had delayed Linda’s opportunities to study earlier in life, but she had studied one subject at a time at various schools until she was fully qualified to be a part of Monash’s first medical student intake,” says Christine. “She was very supportive to all of us. Linda and her husband Eric offered their house for a number of memorable parties, to which staff were also invited. She was a keen student and involved us in discussions to help clarify various topics for herself and others.”

​​Another woman student, Judith Lumley, joined the class in fourth year, having come from Cambridge University and University College Hospital in London, accompanying her husband to a job in Melbourne. “She had already completed fifth year in UK, so  knowledge and experience which she generously shared with us – not surprisingly she gained a number of prizes.”

“Every year brought new and interesting experiences of learning. While on campus at Clayton extracurricular activities included choral singing, orchestra performance and film club showings. I did not join any sports clubs but occasionally enjoyed watching Tasmanian colleagues and others playing football. My visits to the Notting Hill Hotel were not frequent but always enjoyable.”

During this time, Christine met her husband, Dr Norman James, a fellow 1966 Monash medical student. “We met as students, but did not marry until after graduation, towards the end of our first year as hospital residents. We both enjoyed our work and continued to study for a number of years.” In fifth year, the students lived for several weeks at various hospitals including Royal Park for psychiatry, Fairfield for infectious diseases and at either the Alfred Hospital or Prince Henry’s Hospital for inpatient and outpatient experiences. Christine says her fondest memories of being a Monash student come from her six months spent in (now-demolished) specially built student accomodation at the Queen Victoria Hospital, on the third floor above the Monash departments of Obstetrics and Gynaecology and Paediatrics. “We were on call for obstetric duties and most of us were enabled to be involved with about ten deliveries at various times of the day or night.”

“The Queen Victoria Hospital for 50 years prior to 1946 had been, as its motto proclaimed, Pro Feminis A Feminis!”, says Christine. “It was a hospital run by women for women, with one of its aims being to encourage the training and employment of women doctors.”

“In 1956, when women doctors were more easily employed elsewhere, several male doctors were first employed at the hospital – so when the first Monash medical students, mostly male, arrived in 1965 they seemed to be quite well accepted. However there was still a predominance of female obstetricians, surgeons, anaesthetists and others. They were good, if eccentric, role models for us women students.”

It was perhaps this experience that later instilled a passion for women’s health – including some important work in early breast cancer detection.

Christine obtained higher degrees, DDR and FRANZCR, in New Zealand. “We lived in New Zealand for 12 years and our two children were born there. We returned to Australia in 1980 not long after spending a wonderful year in Ann Arbor Michigan where Norman completed research for his MD thesis. We chose Adelaide as a city where there were good jobs, good education for our children, a good arts scene, not too crowded yet not too far from family and friends in Melbourne.”

In the 1980s Christine developed a special interest in mammography and attended a course in Sweden with the then world expert in the field, which led to communication with experts elsewhere in the world. Soon afterwards Christine and a group of radiologists set up a pilot mammography program which eventually became part of the national breast screening program. Christine continued for the next 25 years in both private practice and in the government-funded national breast screening program.

“Breast cancer survival has certainly increased since the implementation of breast screening in Australia,” she says. “Part of this is due to improvement in treatment but mammography itself has also had a considerable impact.”

“I would hope that mammography screening will be superseded by a simple but highly effective test and that breast cancer treatment will also become simpler from the patient’s perspective. Maybe Monash graduates will make such breakthroughs!”

Christine has words of advice for those starting out in medicine – firstly, the patient comes first. “I would suggest remaining focused on the best way to improve the lives of patients, be it by prevention measures or by treatment.” Secondly, “Continuing learning is very important. Although this is now facilitated – and even required – by medical registering bodies, it should remain a general habit embraced with enthusiasm.”

Throughout her own stellar career, Christine never lost an interest in learning. “In 1996 I completed a course in clinical epidemiology (mainly at a distance and using the brand new technology of internet) at the University of Newcastle which was helpful in understanding the impact of breast cancer screening as reported in the medical literature. I authored two published papers during this time.”

After she retired in 2001, she remained on several committees concerning mammography quality and service delivery and continued a number of accreditation and other mammography visits to various parts of Australia and New Zealand.

Christine says of her time as a medical observer in the USA and elsewhere, “I felt very comfortable in such meetings being grateful that our Monash training enabled us to tune in to best practice anywhere in the world.”

“In retirement I have been involved as a mentor for Indigenous medical students at Flinders University and the University of Adelaide. We meet once a term as a group of mentors and students as well as exchanging occasional emails, phone calls or sharing lunches as individuals. I have found this a great privilege and it’s very pleasing that some of the early students, now practising doctors, continue to attend meetings when they are able and are themselves becoming mentors.”

“We have attended many re-unions of our medical year, including at least one combined with the year group which graduated in 1967. Many of these students had been our friends too and included those that delayed graduation for a year in order to complete a bachelor of medical science.”

“The fiftieth anniversary celebrations arranged by Monash with a dinner in the Melbourne Cricket Ground facilities were memorable. Sixty years seems to have passed by very quickly. Since our student days much new knowledge has accumulated and technology has expanded almost exponentially. It is unlikely that these trends will diminish. Monash medical graduates are likely to continue making significant contributions to research as well as patient care.” 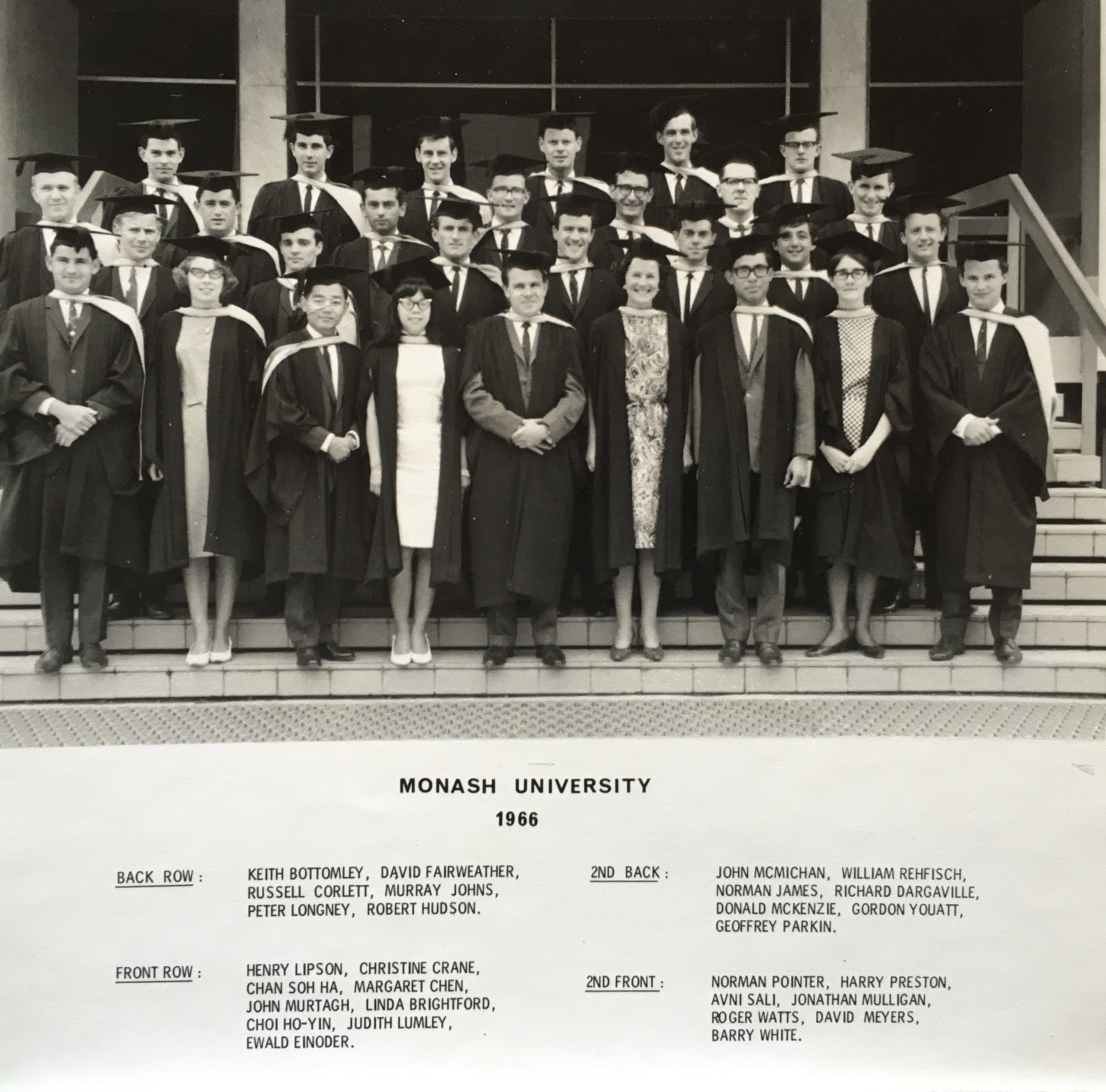