Study mapping the thickness of the layers of the retina in 18 pairs of twins at midlife has found that it could be a marker of future dementia risk.

The paper, led by Associate Professor Christopher Moran and Professor Velandai Srikanth, from the National Centre for Healthy Ageing in Australia, and published in the journal, Scientific Reports, tested 18 pairs of twins recruited from Twins Research Australia, average age of 64 years and two thirds female.

Using a sample of twins originally recruited for the study of diabetes and brain health, the researchers performed cognitive testing and MRI scans to measure brain volumes, integrity of brain white matter, and cerebral blood flow with the aim of correlating these with retinal layer thickness measured with a commonly used method called Optical Coherence Tomography (OCT). 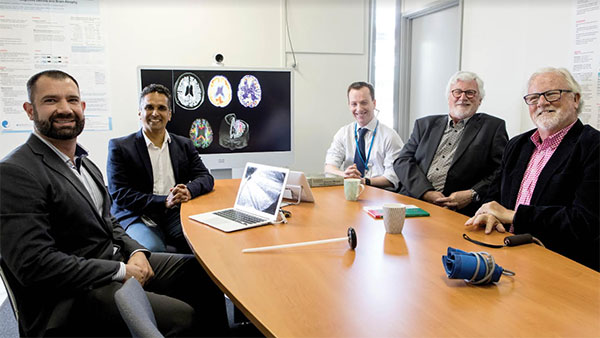 According to Associate Professor Moran, there has long been an interest in whether assessments of the eye reflect brain changes seen in neurodegeneration. “During the development of the foetus there is a close correlation between the development of the retina, the nerve layer of the eye and the brain. If we look at the other end of life, then it can be assumed that degeneration of the retina and nerve cells in the brain may also occur in parallel, making testing of retinal thickness a potential marker of dementia,” he said.

“Such an easy to measure biomarker could allow for understanding why dementia occurs and also assist in the early identification of those at risk of dementia, before people reach the age of expressing clinical symptoms of dementia. Our study examined people at late midlife, at a time when future risk of dementia may still be reduced with good preventive strategies”

According to Alzheimer’s Australia, by 2056, In the absence of a significant medical breakthrough, more than 6.4 million Australians will be diagnosed with dementia
at a cost of more than $1 trillion.

Currently potential biomarkers of future dementia risk are based on complex brain scans or testing of specimens involving blood or cerebrospinal fluid - procedures which are often complex, expensive, or invasive.

In comparison, the retina at the back of the eye can be relatively simply visualised, has been postulated as a potential surrogate of brain health given that its blood vessels and nerves are an extension of that of the brain. The authors collaborated with specialists in eye research based in Melbourne, Sydney and London to obtain these measures.

The study found that greater thickness of a particular retinal layer, the ganglion cells – the cells that connect the eye to the brain - was strongly associated with better cognitive function, greater grey matter volume and white matter integrity, and greater brain blood flow.

“Ganglion cell layer thickness showed consistent associations with a range of brain measures suggesting it may have utility as a midlife marker for future dementia risk,” the authors reported.

About the National Centre for Healthy Ageing (NCHA)

The NCHA is Australia's premier healthy ageing research centre committed to the transformation of health and care of our ageing communities.

A partnership between Monash University and Peninsula Health, the NCHA brings together the very best researchers from a variety of health disciplines to co-design research to help solve some of the greatest challenges facing our ageing population.

The Living Labs program is the engine room of the centre’s research. Working with health, aged and community care partners to conduct a wide range of research that looks to improve the way our ageing communities can access and receive care.

Developing, testing and implementing new models and systems (health and social) for some of the most complex problems relating to healthy ageing.