The Faculty of Medicine, Nursing and Health Sciences was delighted to honour our 2020 and 2021 David de Kretser Award recipients, Professor Marilyn Baird and Professor Ross Coppel at a ceremony in Monash’s beautiful new chancellery building on Friday.

Named in honour of Professor David de Kretser, whose links with the Faculty date back to 1969 when he received his MD from Monash, the David de Kretser Award is awarded annually to an individual who has made an outstanding contribution to any area of the faculty’s operation over a significant period of their working life.

The faculty was delighted to be joined by Professor de Kretser to present the awards to our 2020 and 2021 recipients.

Professor Marilyn Baird received the 2020 David de Kretser Award. Professor Baird was the Foundation Head of the Department of Medical Imaging and Radiation Sciences which she established in 1997. In 1998, she introduced Australia’s first integrated four-year Bachelor of Radiography and Medical Imaging.

In 2004, Professor Baird was the sole recipient of the Vice-Chancellor’s Award for Teaching Excellence and in 2005 was awarded the Nicholas Outterside Medical Medal for services to the profession by the Australian Institute of Radiography.

In January 2013, Professor Baird was appointed by the Medical Radiation Practice Board of Australia to the position of Foundation Chairperson of the Accreditation Committee of the Board for a term of three years. In May 2013, she was appointed by the Department of Health (Victoria) as Chief Allied Health Advisor to the Allied Health Science Education Reference Group.

“At Monash, we attract the best of the best to our highly regarded health professions courses, and our graduates are in high demand. We will benefit for years to come from Marilyn’s leadership. Marilyn set the standards of teaching, and introduced innovative programs that uplifted the quality of learning and teaching across the faculty”, said Professor Christina Mitchell, Dean, Faculty of Medicine, Nursing and Health Sciences. 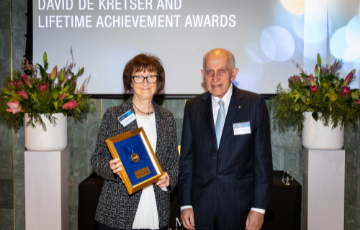 Professor Coppel took up his first position at Monash in 1994 as a Professor of Microbiology within the Medicine Faculty and was Department Head until 1998. He is now the Deputy Dean of Innovation and Strategy at Monash’s Faculty of Medicine, Nursing and Health Sciences.

Professor Coppel is an internationally recognised scientist for his work in the fields of malaria, tuberculosis and primary biliary cirrhosis. Professor Coppel is also an expert in bioinformatics and health data, and has extensive experience in advising on health and medical research strategy and biotechnology for the academic and government sector.

Professor Coppel serves on the editorial board of Molecular and Biochemical Parasitology, the top journal in the field of malaria and has reviewed for numerous journals including Nature, Science, and Cell. He is a named inventor on ten patents for inventions in malaria, primary biliary cirrhosis and novel antibiotics.

In 1998, he became the first person to be appointed as an independent assessor to the Federal Court of Australia when he sat with the Justice in a major case involving a biotechnology patent.

“For over 30 years, Professor Coppel has been a strong advocate for health and medical research and remains one of Australia’s most influential thought leaders in developing our research capabilities, systems and talent. He has applied his extensive experience and networks to play a pivotal role in developing Monash and the wider Australian sector to be amongst the best-regarded health and medical research communities in the world. He is frequently called upon to advise local and international funding bodies,” said Professor Christina Mitchell.

“Ross’s well-known ability to distil the most complicated scientific ideas into practical, common language has long established him as a thought leader on improving the societal impact of academic medical research through closer engagement with other sectors of society, including industry, the healthcare sector, and policy makers.” 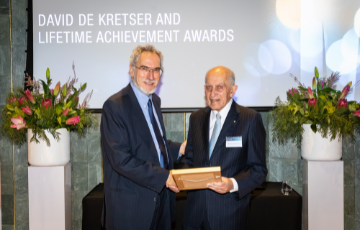