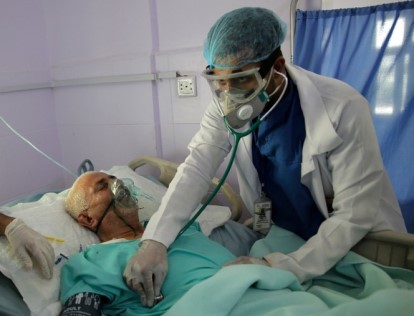 Glucocorticoids are used in a variety of medical conditions including in Covid-19 where they improve survival in critically ill patients. Photo Credit New York Times 2020.

PhD candidate, Ms Iolanda Miceli to appear on Einstein A-Go-Go 29 May to discuss her research on glucocorticoid replacement therapy with GILZ.

A novel drug with the potential to replace commonly prescribed, but harmful, glucocorticoids in the treatment of autoimmune disorders is being investigated by a leading group of researchers from the School of Clinical Sciences at Monash Health, led by Dr Sarah Jones. They have recently discovered a highly promising target which produces the same beneficial effects as glucocorticoids, but without the harmful side effects.

Glucocorticoids (also known as corticosteroids or “steroids”) are one of the most prescribed medications in Australia today. They are used to treat anything from arthritis to cancer to Covid-19 and are highly effective anti-inflammatory agents. However, there’s a catch.

“Glucocorticoids cause a whole host of side effects including weight gain, diabetes, heart disease and bone thinning [osteoporosis],” Dr Jones said. “Despite this, 1-2% of the global population take glucocorticoids long-term. We desperately need an alternative and this is where GILZ comes in.”

This innovative research, which was recently awarded a multi-million-dollar funding grant from the National Health and Medical Research Council (2022), focuses on a molecule known as the Glucocorticoid-Induced Leucine Zipper, or GILZ. Through years of research by this group, GILZ, a unique molecule which modulates the body’s immune system to dampen inflammation has been shown to achieve the same beneficial effects as glucocorticoids, but without the toxic side effects. In preclinical studies of the common inflammatory diseases, psoriasis and rheumatoid arthritis, GILZ relieves inflammation as effectively as glucocorticoids, or even more so.

Most importantly, while glucocorticoid treatment results in side effects such as obesity and diabetes, GILZ does not. The head of the Rheumatology Research Group at Monash Health, Professor Eric Morand, is “particularly excited” about this research. “I have high confidence that GILZ has the potential to transform our treatment of patients with inflammation,” remarked Professor Morand, “It’s hard to overstate the significance of this project.”

When trying to develop a way to increase GILZ to relieve inflammation, the researchers ran into a problem. “GILZ works within the cells and is incredibly hard to produce on a large-scale,” said Iolanda Miceli, key research scientist within the group. “Therefore, it’s not as simple as manufacturing GILZ and giving it to the patients.” The team, therefore, developed a method of boosting GILZ by deleting an inhibitor of it. Ms Miceli describes the strategy as “like removing the speed limiters on a car. In the same way, we are blocking an inhibitor to produce a net increase in GILZ”.

This innovative strategy has displayed incredible promise in preclinical studies and work is underway to develop a drug to test in clinical trials. This hints at promises of a new era of medical treatments which don’t cause more problems than they solve.

To hear more about Iolanda’s research and the future of this exciting glucocorticoid replacement therapy, please tune into 3RRR at 11am Sunday 26 June.