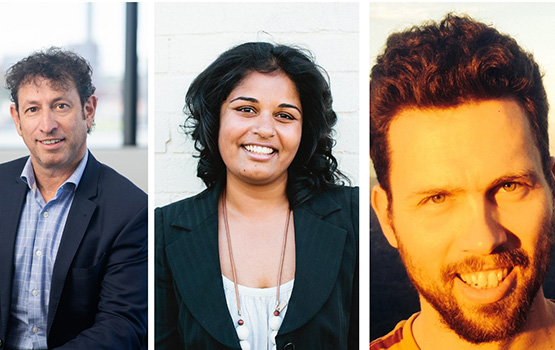 Monash University researchers Professor Dan Lubman AM, Dr Shalini Arunogiri and Dr Paul Liknaitzky are part of an interdisciplinary team of researchers awarded over $1.9 million to investigate the efficacy of MDMA-assisted psychological treatment to treat people with alcohol use disorder (AUD) and post-traumatic stress disorder (PTSD).

The project is one of seven clinical trials announced this month by the Federal government under the Medical Research Future Fund (MRFF) to test the use of potential breakthrough combination therapies to treat debilitating mental illnesses.

The team, led by Associate Professor Kirsten Morley from the University of Sydney, will conduct a world-first clinical trial to determine the feasibility of embedding integrated, exposure-based treatment for PTSD and AUD and MDMA in health practice, including within alcohol treatment services.

“We’re incredibly excited to be part of this extraordinary interdisciplinary team and to be involved in this first ever clinical trial of MDMA-assisted therapy for PTSD and addiction,” said Professor Lubman.

AUD and PTSD is a common comorbidity causing significant harm to patients and has profound social, health and economic consequences. One in four Australians will develop an AUD in their lifetime, with 30-40 percent of those seeking treatment also experiencing PTSD.

“We have seen promising studies showing the effectiveness of MDMA–assisted therapy in the treatment of PTSD, but there have been no trials investigating MDMA-assisted therapy for both AUD and PTSD,” said Professor Lubman.

“This funding recognises the prevalence and impact of AUD and comorbid PTSD on the community and the need to develop novel interventions to deliver better outcomes for patients.”