John Powles was qualified both in medicine and community medicine. Whilst still a medical student at the University of Sydney, he was a member of the historic Freedom Ride Committee, which exposed discrimination against indigenous people in rural NSW. He was appointed at Monash University as part time lecturer in Social and Preventive Medicine (as it was then called) in 1975. He was later promoted to Senior Lecturer and was also Deputy Head of Department until 1991. He taught the medical, social work and Master of Public Health students at Monash. In fact, he was instrumental in Monash becoming only the second University in Australia to offer an MPH. 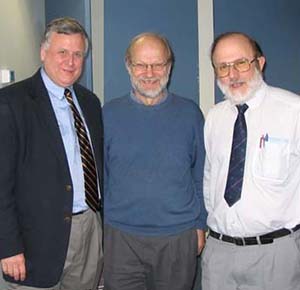 Michael Abramson was a student of John’s and later a colleague. He recalled that John was a great advocate (although not necessarily always a practitioner) of the hunter gatherer lifestyle. Student evaluations commented on being disconcerted by his "worried frown". He was a principled and passionate man, but didn't tolerate fools gladly. In a real sense he was Michael’s academic predecessor. Michael inherited John’s office and still has a bookcase of his, after his return to the UK. John kept in contact after taking up the appointment at Cambridge and returned a couple of times to present interesting seminars in the School of Public Health and Preventive Medicine on research that he was doing in Bulgaria and elsewhere in Europe.

When not making history himself, John was an active observer. He was on sabbatical at the Humboldt University in East Berlin, when the Berlin Wall fell. For some reason, he had been an admirer of the former East German leader Walter Ulbricht. He noticed that people in East Berlin mostly only seemed to be looking forward to buying American cigarettes. He brought home several chunks of concrete smashed from the Wall with chisels and pickaxes by ordinary Berliners. These days you have to pay for a fragment of the Wall, which comes with a certificate of provenance.

John Mathews recalled that he first met John Powles, and was greatly impressed, when he came to see him and John Hopper in the early 1980s at the Department of Medicine at the RMH. That was at the time when his breadth of thinking helped to stimulate John Hopper and Graham Giles to set up the longitudinal migrant cohort looking at dietary effects. In the period 1986–1989, Coralie Mathews, Graham Oliver and other friends used to spend weekends at Beechworth with John Powles and his partner. Coralie remembered those times fondly in later years. He last spoke to John by phone, while he was in Cambridge, to pass on the news of Coralie’s death in 2012.

One of the landmark studies lead by John during his time at Monash was an investigation of the Mediterranean diet and the health of migrants from the Greek Island of Lefkada. This was inspired by Dr Dimitrios Ktenas, himself a migrant from Lefkada, who was president of the Greek Orthodox Community of Melbourne. John faced new challenges when conducting fieldwork of family members who remained on Lefkada. This was before the validation of food frequency questionnaires and levels of literacy were quite low. He came up with the novel approach of giving people disposable cameras to photograph their meals. There were many pictures showing a whole glass of olive oil for breakfast. Whilst Greek food is still very popular in Melbourne, this particular custom has not really taken off.

The Lefkada migrant study was a family study – it focussed on the siblings, some of whom migrated and others who did not. This led to novel pedigree analyses that brought a greater understanding of the roles of genes and environment on blood pressure and showed the more varied environmental effects that the male migrants were experiencing relative to the female migrants. John’s work in the 1980s was a great impetus for family studies of breast and other cancers initiated by Melbourne researchers in the 1990s.

It was John’s experience in Greece and his unflagging enthusiasm for untangling the diet and cancer nexus that brought him into the orbit of Graham Giles and John Hopper when planning the Melbourne Collaborative Cohort Study (Health 2020). John was one of the original principal investigators, as was Dimitri Ktenas, and their experience was of enormous value in designing the study and its data collection protocols. Much of this planning was done outside of office hours and was lubricated by moderate amounts of red wine. It was John who suggested putting the “Collaborative” into the study’s title and who encouraged non-cancer collaborators such as Prof Kerin O’Dea and Prof Richard Larkins to join the team.

John really made his mark on public health during his time in Melbourne. He taught students from many disciplines, who have followed in his footsteps. He initiated novel programs of research – migrant studies exploring the role of genes and environment upon blood pressure, and the landmark Melbourne Collaborative Cohort Study, that has provided important insights into the relationship between diet, cancer and many other health outcomes. These form part of his considerable legacy. We will all miss him.