Globally  – half of all women of childbearing age are overweight or obese and women  generally are gaining excess weight in pregnancy. This excess weight gain is  putting women at greater risk of complications including having a preterm  birth, caesarean section and gestational diabetes. These conditions not only put  both mother at risk during pregnancy and impact the baby’s health, but also  impact child health through into adulthood with an increased risk of chronic  illness. 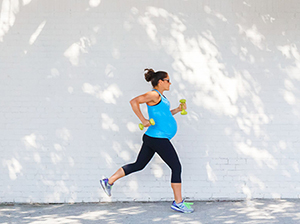 New  data from the world’s largest study looking at the impact of lifestyle  interventions in pregnancy has crushed the myth that eating for two is  beneficial for pregnant mothers and that exercising is harmful to a baby. The  landmark study, including Monash University’s Professor Helena Teede is  published today in the British Medical Journal, and has found that maintaining  a healthy diet and exercise through pregnancy has a significant impact on the  health of the mother and baby – including reducing risk of caesarian section by  10% and gestational diabetes by 24%. Importantly these benefits occurred  regardless of whether the mother was overweight or obese when becoming pregnant.

The  study involved more than 50 researchers from 41 institutions in 16 countries  and includes data from 12,526 women including thousands of women from Australia.

Previous  studies have found that healthy diet and exercise during pregnancy can limit excess  weight gain during pregnancy, but there is no consistent data on the  protective health effects for mothers and babies.

Pooling  and detailed analysis of information from 36 studies globally, the researchers  compared the effects of healthy eating (including restriction of sugar  sweetened beverages, promoting low-fat dairy products, increase in fruits and  vegetables) and physical activity (moderate intensity including aerobic classes  and stationary cycling, and resistance training for muscle groups) in pregnancy. 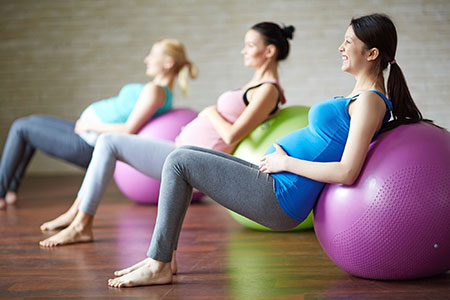 Healthy  diet combined with physical activity significantly reduced the mother’s weight  gain during pregnancy by an average of a 0.7 kg compared to the control group  and lowered the odds of the mother having a caesarean section by about 10 per  cent.

In  addition, the data revealed that changes in lifestyle reduces the risk of gestational  diabetes in pregnancy by 24 per cent.

According to Professor Helena Teede from the Monash Centre for Health  Research and Implementation, Monash University and Monash Health the study is  important because it dispels the myths that “eating for two” is beneficial for  the baby and that exercising can in fact be harmful. “In this study we show  that physical activity and a moderated healthy diet optimises mothers pregnancy  weight gain and has direct health benefits,” she said.

According  to Dr Cheryce Harrison, an exercise physiologist from the Monash University and  co-author, the study emphasizes the importance of maintaining physical activity  in pregnancy. “When pregnant the temptation is to rest and we have shown in  Australian women activity levels fall dramatically in pregnancy. Yet here it is  clearly important to maintain activity levels and meet standard recommendations  for 150 minutes of dedicated activity per week throughout most of the  pregnancy,” she said.

The  authors called on immediate input from health policy makers in Australia and worldwide.  “This is now clear evidence that pregnant women, around the world, should be supported,  encouraged and monitored to optimise healthy diet and moderate exercise.  Evidence shows healthy lifestyle advice is not enough, policy implementation to  make healthy choices easier, as well as supportive pregnancy lifestyle interventions  are needed,” Professor Teede said. “Action is vital not only because of the  health of the mother and baby, but because of the enormous economic and health  system impact that ignoring this issue is having.”

However  many barriers remain to implement this research evidence into practice to keep  Australian mother and babies healthy. Professor Teede noted that “Rather than  just telling women to be healthier, and invoking guilt and sometimes despair,  this research shows we need to directly support women with simple healthy  lifestyle interventions as part of routine care, just as we do in smoking  cessation, an area where Australia leads the world,” she said.

“We  also need to train and support health professionals to deliver effective  lifestyle interventions embedded into routine care and ensure that guidelines  for pregnancy care are aligned and updated with this new evidence.” 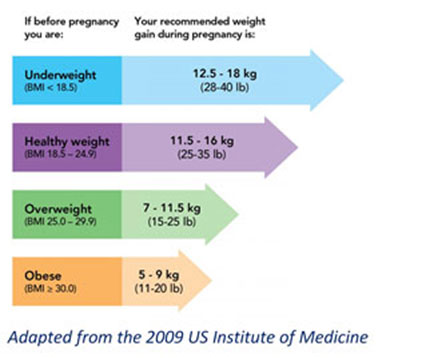 Gestational  diabetes normally affects over 1 in 7 Australian mothers in pregnancy, and  increases costs of care and risks of complications in mother and baby.

Caesarean  rates are high in Australia, partly driven by excess pregnancy weight gain,  bring higher costs to the health system and can carry risks such as infections  for the mother and breathing difficulties for the baby.

Currently  in Australia few women are offered access to lifestyle programs on diet and physical activity to optimise  healthy weight gain in pregnancy and improve outcomes for mother and baby.

This study found that healthy eating and physical activity has a  beneficial effect across all groups, irrespective of a mothers starting weight,  body mass index (BMI), age or ethnicity; confirming these lifestyle interventions benefit across the population.”

The  study also found that there was no strong evidence that the interventions  affected offspring outcomes such as stillbirth, underweight or overweight  births, or admission to a neonatal intensive care unit. The lack of adverse  effects should reassure mothers who have traditionally been advised not to  undertake structured exercise or manage their diet in pregnancy.