Androgens are traditionally viewed as ‘male' hormones, but they are very important for women...so in fact androgens are male and female hormones.

Androgens are hormones produced by both the ovaries and the adrenal glands in women, and by the adrenal glands and testes in men. They are known mostly for their masculinising effects in men, namely, beard growth, deeper voice, balding, muscle strength and potency. The main androgen in women is testosterone.

The adrenal glands produce hormones we call loosely call androgens but are really "pre-androgens" as they are the main source of both testosterone and oestrogen production after menopause. The level of one of the adrenal pre-androgens known as DHEA-S in the blood stream is higher than any other human steroid except cholesterol.

Women need testosterone in order to make oestrogen in their bodies

Very little testosterone circulates freely in the blood stream. Instead 98% of testosterone is bound tightly to a protein known as sex hormone binding globulin (SHBG). This is important when considering testosterone excess and testosterone deficiency. 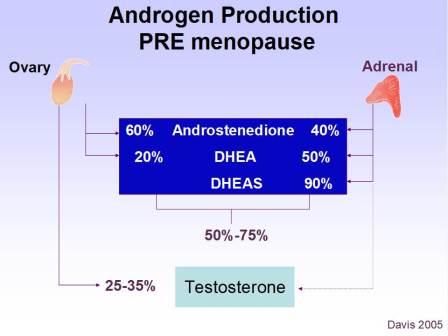 Testosterone levels vary during the menstrual cycle just like other ovarian hormones, with testosterone peaking during the middle of the menstrual cycle, around the time of ovulation. Some believe this may be an in built stimulus to increased sexual activity in women close to ovulation and therefore nature's way of enhancing sexual activity close to ovulation and therefore increasing the likelihood of a pregnancy.

Changes in androgens with ageing

By the time women are in their late 40's their testosterone level has fallen to about half of what it was in their 20's. There is no further change in testosterone as women go through natural menopause, but levels do slowly decline with increasing age.

Women who have their OVARIES SURGICALLY REMOVED experience a sudden drop in blood testosterone levels.

Other circumstances which cause lower androgen levels in women include:

Disclaimer
The above advice is a general guide and was accurate at the time of production of this document. [August 2013]. This information is provided to complement, not replace, the advice of your health professional.