Professor Susan Davis MBBS FRACP PhD, is a National Health and Medical Research Council of Australia Principal Research Fellow and Professor of Women's Health in the Department of Medicine, Alfred Hospital Campus of Monash University. She has published extensively in the field of women's health with specific focus on the consequences of sex steroid depletion and sex steroid therapy in women and identifying modifiable factors that will improve the health and wellbeing of women in middle and later life. Professor Davis was a member of Monash University Council 2005-2007 and is past President of the Australasian Menopause Society. She has published over 200 peer reviewed manuscripts and has been an invited lecturer at over 100 international conferences and presented 20 distinguished international plenary lectures. She has been the recipient of numerous awards, including the Robert Greenblatt Prize of the International Menopause Society 1993, the Glenn Aging Award of the US Endocrine Society 2000, the Glaxo-Welcome Diabetes Education Award 2000, the Barbara Gross Award of the Australasian Menopause Society 2002 and 2006, the inaugural North American Menopause Society Androgen Research Award 2003, and the Australasian Menopause Society Award (presented every 2 years to an individual who has made an outstanding contribution to the field).

A/Professor Robin Bell MBBS, PhD, MPH, FAFPHM, Cert Health Econ Grad Cert Health Professional Education is a medical epidemiologist with a long-standing interest in women's health. She has broad-based experience in women's health epidemiology having previously worked at the Research Unit of the Jean Hailes Foundation, the Royal Women's Hospital and the Perinatal Data Collection Unit of the Victorian Department o f Human Services. A/Prof Bell is Deputy Director of the Women's Health Program at Monash University and has published over 90 peer-reviewed manuscripts in women's health. She also holds an honorary appointment in Public Health at the Alfred Hospital and has an appointment in the Monash University Department of Epidemiology and Preventive Medicine where she co-ordinates the teaching of Population Health in the under-graduate MBBS program. In her new additional role as Associate Dean Research (Clinical, Public and Allied Health), Associate Professor Bell will assist the Deputy Dean Research with the aim of the Faculty of Medicine, Nursing and Health Sciences being recognised nationally and internationally for research excellence.

Maria La China is the research administrator for the Women's Health Program, Bupa Health Foundation Health and Wellbeing after Breast Cancer Study. Maria obtained an Associate Diploma of Private Medical Secretarial Practice from Caulfield Institute of Technology (now part of Monash University) and, since then, has worked in various medical disciplines. Maria's association with women's health started in 1997 when she commenced working for Professor Susan Davis in her endocrinology practice. Maria's role in the study includes the coordination of questionnaires, data clarification and is the point of contact for enquiries.

Dr Mary Panjari BSc GradDipEd GradDip Women's Health MWH PhD is a postdoctoral fellow with an interest in women’s health. She completed a Masters of Women's Health at the University of Melbourne where her research project investigated women who spontaneously quit smoking during pregnancy. For this work, she was awarded a Young Investigators Award, Perinatal Society of Australia and New Zealand, 1st Annual Congress, 1997 and Victorian Public Health Award for Excellence and Innovation (Commended) in 1999. Dr Panjari continued working in women's health research before moving to opiate addiction research at Turning Point Drug and Alcohol Centre. She completed her PhD at Monash University in 2009. Her project was a study of the efficacy of oral DHEA therapy for improved sexual function and wellbeing in postmenopausal women. She presented this work at the NAMS conference 2008 where her abstract was one of the top 3. Dr Panjari is currently working on the BUPA Health Foundation Health and Wellbeing after Breast Cancer Study.

Penny Robinson BBiomedSc (Hons) MBiostat has recently started working with the Women's Health Program, mainly analysing the results of the Bupa Health Foundation Health and Wellbeing after Breast Cancer Study. She studied Biomedical Science, before commencing studying Honours and then a Masters of Biostatistics through the Department of Epidemiology and Preventive Medicine (DEPM). She also tutors biostatistics and epidemiology through DEPM to undergraduate and postgraduate students.

Dr Pam Fradkin MBBS, Dip Micro was involved in the development of the Bupa Health Foundation Health and Wellbeing after Breast Cancer Study, in partnership with the Chief Investigators. She left her position as the Study Director in February 2005 and is currently involved on a part time basis. Prior to joining the Women's Health Program, Pam had worked in General Practice, with a special interest in women's health, for over 30 years.

Jo Bradbury has extensive experience in clinical research. In 2000, she was responsible for setting up the ATLAS international breast cancer study at the Research Unit of the Jean Hailes Foundation in Victoria. Jo continues to be responsible for the management of this study, which is now being conducted at the Women's Health Program at Monash University. The study is currently in its 5 year follow-up phase. Jo is involved with promotion of the Bupa Health Foundation Health and Wellbeing after Breast Cancer Study and provides other assistance in an advisory capacity. 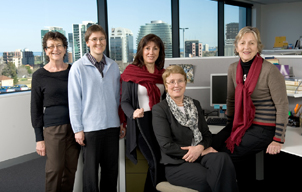