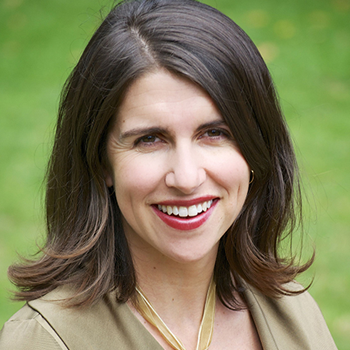 Anna Skarbek is the CEO of Climateworks Centre, working to develop the low carbon economy. A former banker and green policy adviser, Anna has led Climateworks Centre since its creation in 2009, analysing emissions reduction opportunities and partnering with business and government to unblock barriers to their implementation.

Climateworks' independent and non-partisan approach, co-founded by The Myer Foundation and Monash University, sees her working with multiple federal government departments as well as State governments and large corporates. She works with other stakeholders including investors, business, environment and civil society leaders.

Anna was a founding director of the Clean Energy Finance Corporation from 2012-2017, and is a director of Impact Investment Group, the Green Building Council of Australia and of the Centre for New Energy Technologies. She is a member of the Blueprint Institute's strategic advisory council and the Grattan Institute's energy program reference panel, and is the 2020 Mission Innovation Champion for Australia. She is a former director of the Carbon Market Institute, the Linking Melbourne Authority and Amnesty International Australia. She was a member of the Australian Government's Energy White Paper reference panel, Land Sector Carbon and Biodiversity Board and NGO Roundtable on Climate Change, and of Victoria's Independent Review of the Climate Change Act and South Australia's Low Carbon Economy Expert Panel.

Anna has a background as an investment banker, policy advisor and lawyer. Before Climateworks, she worked in London's carbon markets as Vice President of Advisory with Climate Change Capital, an investment manager raising capital for low carbon activities.

Anna's prior career in Australia included senior policy advisor to the Victorian Deputy Premier, investment banker in Macquarie Bank's energy and utilities team, and solicitor with Mallesons Stephen Jaques. She served on the board of The Big Issue and Amnesty International Australia including as National Treasurer.

For more on Anna's work, visit our Climateworks Centre site.

Why it doesn't make economic sense to ignore climate change in our recovery from the pandemic, by Anna Skarbek, The Conversation, 7 May 2020

The conversation hour: Anna Skarbek discusses the impact of the coronavirus on climate change.

How can climate action help drive Australia's recovery? Anna Skarbek in conversation with Australia at Home.

ClimateWorks CEO Anna Skarbek addresses the next generation of business leaders at the 2019 Monash Graduation Ceremony.