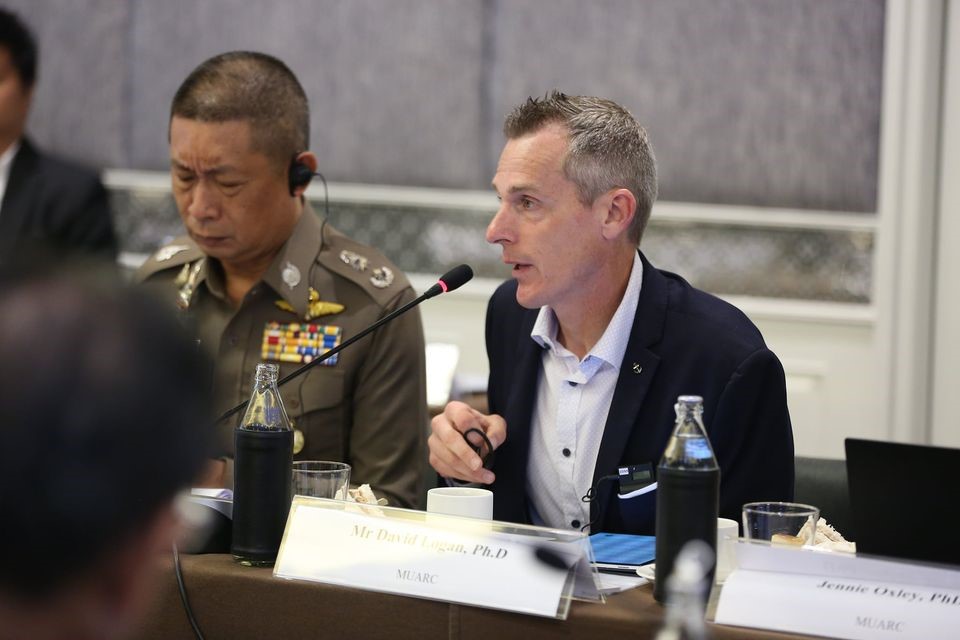 David Logan sat among a roundtable of ministers and senior government officials in Bangkok last year.

Around 20,000 people die on Thailand’s roads each year, prompting the WHO to call upon the Monash University Accident Research Centre (MUARC) to review the country’s performance.

When lives are being lost and the government comes asking for help, a researcher could be excused for feeling some pressure.

But Logan is no stranger to sharing his road safety expertise in the hope that it will save lives.

His presentations have been pitched to audiences ranging from primary and high school students to road safety professionals at MUARC’s Road Safety Management Leadership Program.

“It (the Bangkok roundtable) was another example of translating research to a different audience,” Logan said.

“Low-and-middle-income countries (LMICs) are going to make up 90 per cent of road deaths worldwide. That’s an area where there’s the most room for improvement and I think we should be doing our best to help them improve their situation. “A group of ministers is, in many ways, the same as a group of people from the general public. They both may have only a basic level of road safety knowledge, albeit with quite different priorities.  My job is to help everyone understand road safety in a way that makes a difference.”

Road safety research was not always Logan’s priority, either.

After graduating from Monash University with a PhD in chaos and machinery vibrations, he undertook a consultancy position with Vipac Engineers and Scientists in Port Melbourne.  He spent over three years there and “didn’t mind” the role but wanted to put his mind to something bigger.

“Engineering consulting runs on very small margins and you had to do every job on time and on a very tight budget. There was not that opportunity to explore some of the problems in greater depth. I really missed that.

“I like to see the deeper meanings behind things and how they relate to practical applications. I’ve never been interested in pure research for the sake of it.”

He moved to another consulting job, but the same issue remained.  The work was repetitive and scarcely stimulating.

It was time for a change and something piqued Logan’s interest while browsing the daily newspaper.

“I just happened to be going through the job ads in the paper and I saw an advertisement for a position at MUARC. I thought, ‘I’ll have a go at this’,” Logan said.

“I hadn’t thought about road safety at all up until that point.”

While Logan’s first role at MUARC was managing a real-world crash investigation team, his specialty has become road safety strategy modelling that demonstrates the benefits of countermeasures in reducing fatalities and serious injuries at a whole-of-jurisdiction level.

MUARC’s work in this area began in 2005 with the Macro Estimates for Target Setting (METS) model, which helped shape road safety strategies around Australia. Indeed, when asked about his proudest accomplishment as a MUARC researcher, Logan points to the Centre’s role in developing Western Australia’s 2008-2020 road safety strategy.

“We worked very closely with them, and they were really keen to learn from us. They were very stimulating to work with, highly collaborative, and we ended up developing what we thought was a really good strategy.

“Their fatalities have reduced over the last ten years and they’ve always come back to us for more advice through several changes in government and bureaucratic structure. We took that as a vote of confidence.”

Asked about his professional bucket list, Logan says he would like to extend his research with LMICs. The interdisciplinary nature of MUARC also means there are opportunities to see how his own expertise can be enhanced by perspectives from other fields.

Regardless of which direction his research ends up taking, Logan will continue to be inspired by the ability to make an impact in saving lives.

“The real benefit of working at MUARC is that you get to conduct research and interpret the more theoretical concepts for the purpose of improving society.”

“We’re making a difference to people’s lives. Road safety is one of the most immediate ways you can do that.”