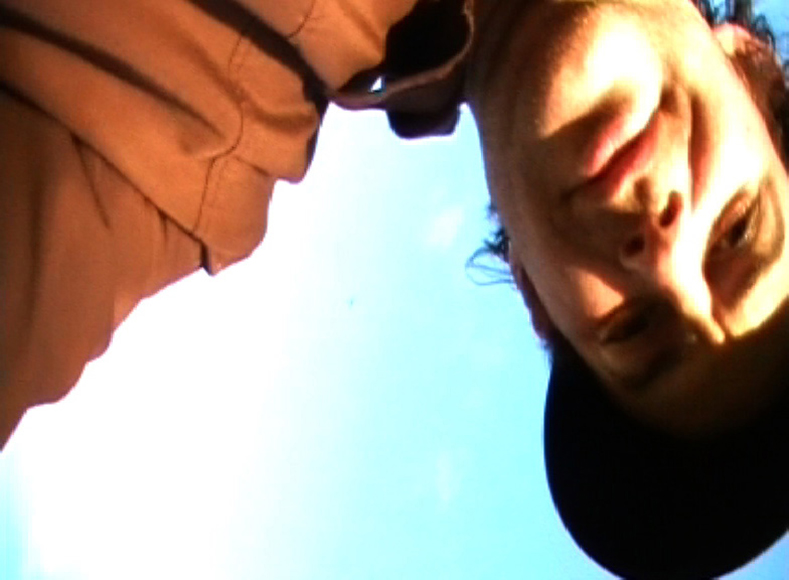 A group of twenty- and thirty-somethings play catch with a video camera in a park. We see this action from the camera’s perspective only – bouncing as it scans arcs of trees and grass, blue sky and clouds, constantly getting closer then further from fragments of bodies, clothes, hands and upside-down faces. Throw is one of more than a dozen video works produced by the artist group Damp, within a far-reaching oeuvre that includes drawing, performance, forms of social exchange, photographs, painting, workshops and sculpture that ranges from small hand-painted ceramic objects to public architectural works.

Damp formed in Melbourne in 1995, while its initial sixteen members were studying at the Victorian College of the Arts. In the face of 1990s privatisation of higher education and an increasing dominance of individualism in art and culture, groups of students were encouraged by their teacher, Geoff Lowe, to collaborate and define ways of working together rather than competing against each other. Post-art school, Damp established its own practice, which has continued for more than two decades, with an ongoing interest in group dynamics and collaboration – both within the group and between artist and audiences.

In Damp’s often informal and not easily categorised art practice, video has sometimes been deployed as a means of documentation and sometimes as an artistic medium in its own right. Food fights, cheerleaders, hugs, kids’ games, music and slapstick feature in Damp video works, and are characteristic of the humour and playfulness the group often brings to art making. In Throw, Damp members play a game of catch with a wrapped-up video camera. What is capturedis simultaneously the work and the making of the work: the process and the product are collapsed into one action.

Damp has broken a lot of things in the service of art. In Throw, a video camera is broken to make a video. The technology had become affordable by this time, so spending $250 to sacrifice a cheap camera was not so outrageous in the scheme of art-making budgets. But like many Damp works, Throw does start to question art’s systems of value – of materials and technology, of art objects, of artists’ time and labour. Damp famously broke its own artworks at the opening of its exhibition Punchline, in 1999 at 200 Gertrude Street; it has broken found ceramics in the process of creating a series of works for The Harrison Collection 2014 and for From the Collection, at Benalla Art Gallery in 2015. In the ongoing Cesello Freddo 2013–, Damp chips away at a Carrara marble bust and disperses the fragments. These actions cast doubt on the location of value in art: is it the object, the action or the people involved?

To date there have been seventy-six members of Damp. At the time of making Throw, in 2008, there were nine. Throw, seen as it is from the untethered and unedited camera’s perspective, becomes a portrait of Damp at that point in time. It is a fragmentary portrait that lingers in the gaps between members, the buoyancy of passing to and fro, the voices calling in the midst of making the work – until the camera breaks.

Rosemary Forde is an independent curator and researcher in Naarm Melbourne.