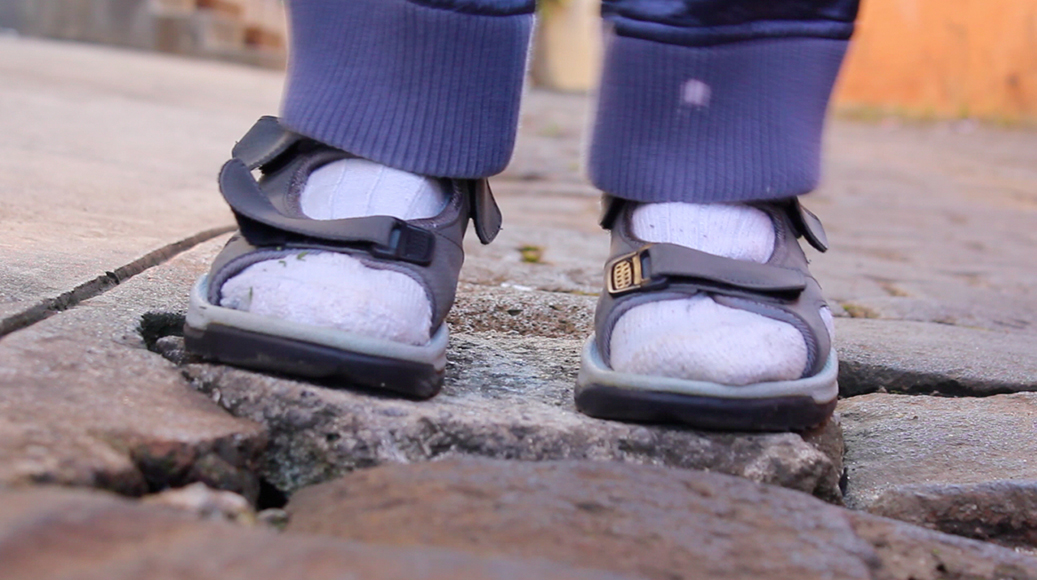 ~wwwarrrmphhh, wwwwwauurmph
Lowered perspective, a dog’s eye view.
69 seconds, 2,484 frames of digital colour footage, stereo audio.
Likely to be played on a loop on a television in a gallery.

~twunnnk, thwaunnnk
Made on Wurundjeri land. An unstable grounding on stolen country.
‘Beneath the pavement, the beach!’ echoes from the Situationist catch cry of ~1968
Or the foundation, stormwater drain, pervasive infrastructure.
One of the goals of plumbing is to remove waste from the city to Elsewhere.


~mwoomph, mwwoumph
We’re in a mostly stable rhythm,
The body’s weight is a percussive force.

~dduuuukt, dduuaacte
We have walked almost countless kilometres with Charlie Sofo over the many years of being in each other’s lives, likely more than with anyone else. Debris Facility’s feet feature three times (in differing footwear).

~eeeerrcth, eeercht
Concrete poethics. Disjuncture of footholds.
The agitation of moving and not moving forward. Rocking back and forth.

~fwmmmpte, ffwmnnmmmpte
Twenty-three different instances of people (friends who have been invited in to perform the task for camera). Relationality is always a material scaffold for cultural production.
Filming during daylight hours only.

~tyyyyummmp, tyyyyuuuump
The texture of the street, some interior spaces.
Public-private-partnerships (who feels at ease in public spheres, who is unsafe).

~kttaaaang, ktaaaaauung
Our weight shifts from one leg to the other, the balance is kept via a constant feedback loop. The muscles that orient our balance and sense of gravity are located in the ears.

~plllaaat, plaaauute
‘The Tell-Tale Heart’, Edgar Allen Poe, 1843, a haunting is location-specific.
Itchy compulsion to pick at a scab: the wound as a fulcrum.

~cheeng, cheenngg
Incomplete index. This work returns when you next tread upon shifting ground, including your body in its echo.
Weight displacement.

~pwennge, pwennnge
(Mostly avoiding) a shoe advertisement.
Inhabitation, and the role artistic labour has in gentrification.

~dwwwuung, dweeeung
A ‘Manhole’ is an access point to confined spaces of infrastructure.
To find liveliness in the cracks, enacting the weed as a method.

~uuuaartch, uaaaartch
Placing ourselves in displacements.
‘Desire lines’ is a behavioural lineage.

~ckkeekt, ckeeetke
A crack turns one object into two, or more. It replicates, reproduces, opens a gap from which im/material flow can occur.

~euuuuurcht, eeuuurcht
The sound of footsteps is how another may locate your movements.
The sneaker attempts to avoid surveillance.
A stiletto is a heel to elevate, and a knife blade to cut.

~btuuuuiiing, bbttuuiiiiinngk
Kissing the ground on which you walk is an act of devotion.

Debris Facility Pty Ltd is a para-corporate entity foundead in 2015 to interrupt value exchanges using a range of tactics within and beyond cultural production. Institutionally affiliated with Liquid Architecture and the Victorian College of the Arts, they work 24/7 on stolen land.