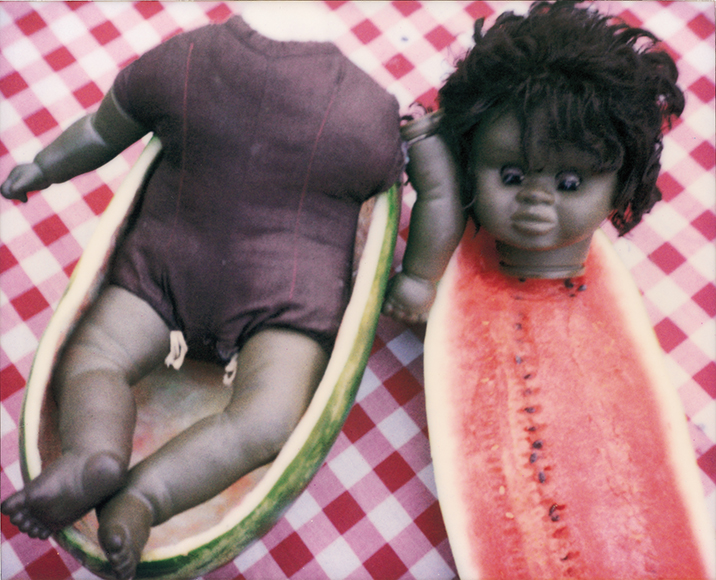 Destiny Deacon is one of Australia’s boldest and most acclaimed contemporary artists, whose thoughtful and nuanced work offers a snapshot of contemporary Australian life from a Blak, queer woman’s perspective. Deacon is known for being provocative and political, using humour as a tool to disarm her audience. Her work reminds us that ‘serious’ art can be funny. She is known for using photography to explore the relationship between comedy and tragedy, and to challenge stereotypes.

Deacon’s work is often inherently camp, both in its aesthetic sensibilities and its sometimes-coded messaging. Meloncholy, 2000, shows a decapitated black dolly cradled inside a hollowed-out watermelon, as if it were a coolamon. The title of Deacon’s work is a play on words: she has recast the spelling of the emotion melancholy to ‘meloncholy’ (as in watermelon). Deacon often plays with spelling as a way of subverting her subject matter, and as a gesture of self-determination. She is widely credited as being the first person to spell Blak without a ‘c’ to mean Indigenous Australian. She says she ‘took the c, out of black little c**t’, a word she recalls being taunted with growing up as a child in Port Melbourne.[1]

One of Deacon’s go-to maxims is that there is a laugh and a tear in all her pictures. She says she likes to make people laugh—because that way ‘they don’t feel it when you stick the knife in’—using her art to get under the skin while playing with notions of race, gender, sexuality and emotion.[2]

The emotion melancholy basically refers to feeling of sadness that lasts for a long period of time, often without any obvious reason. Freud referred to melancholy as the unfinished process of grieving. In the early part of the twentieth century, ‘melancholia’ was often the diagnosis given to women suffering from what we might now think of as depression. Nervous exhaustion, sadness, fear and being ‘too emotional’ were all symptoms considered in some cases to be indicative of mental illness and deserving of treatment or institutionalisation. Later, theorist Judith Butler wrote of gender itself as a kind of melancholy, or as one of melancholy’s effects.[3]

Historically it is well documented that homosexuality, while being criminalised for men, was classified as a mental illness among women. This medicalisation of gender and sexual differences is something Aboriginal people can identify with, having had our identities pathologised as well. So many queer and Blak people have suffered trauma in the name of medicine.

Deacon’s photographic oeuvre twists and reinvents race, gender and sexuality—whether it is a drag queen version of Mickey Mouse (Where’s Mickey?, 2002); her portraits of Blak men playing the role of muse to gay Australian painter William Dobell (Boy at the Basin series, created between 1995 and 2004); or her self-portrait impersonating bisexual Mexican painter Frida Kahlo (Me and Virginia’s doll, Me and Carol, 1997). Or, in this case, a violently beheaded Blak baby doll that lies at the centre of an absurdist picnic. Propped up on the fleshy watermelon, the doll’s head gains a fragile substitute body, itself tone-matched to the cheerful gingham fabric that Deacon has chosen. Her strategy has worked again: I don’t know whether to laugh or cry. It gets under my skin and I think about the vulnerability of being classed as different.

Myles Russell-Cook is the Curator of Indigenous Art at the National Gallery of Victoria. Myles is responsible for the National Gallery of Victoria’s collections of Aboriginal and Torres Strait Islander Art, art from Oceania, as well as global First Nations. Much of Myles’s influence and inspiration comes from his maternal Aboriginal heritage in Western Victoria with connections into Tasmania and the Bass Strait islands.

[2] See Andrew Stephens, ‘Blak Like Me: How Destiny Deacon Used Art to Shout Back at Racists’, The World News, 15 January 2021, https://theworldnews.net/au-news/blak-like-me-how-destiny-deacon-used-art-to-shout-back-at-racists.

[3] See Judith Butler, Gender Trouble: Feminism and the Subversion of Identity, Routledge, New York and Abingdon, 1990, among other texts, which draws on Freud’s discussion of melancholy to theorise its role in identity formation.