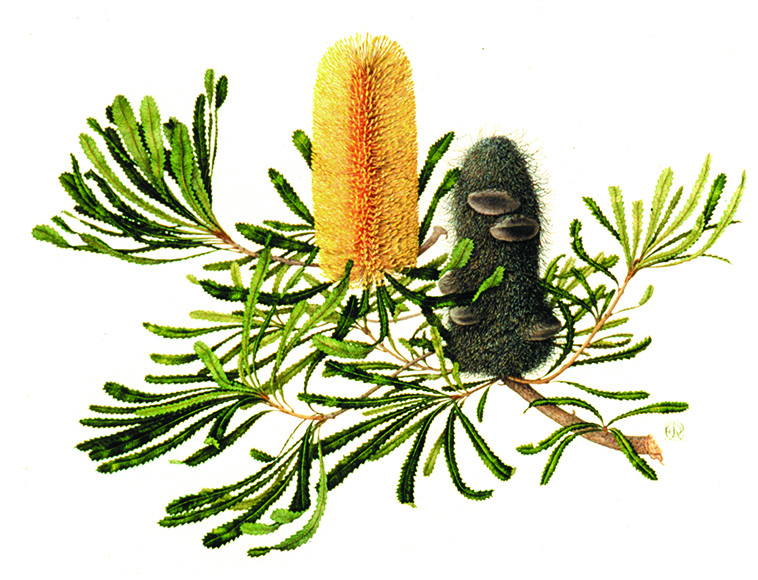 Celia Rosser: The Banksias – Volume I

Presented in association with Monash University Museum of Art | MUMA.

Renowned botanical artist Celia Rosser is celebrated for The Banksias, a three-volume folio illustrating every known Banksia species. The genus was named in honour of Sir Joseph Banks, who was the first to collect specimens in 1770 as botanist on Captain Cook’s first expedition. Some seventy-seven species of the Banksia genus have now been formally identified.

The Celia Rosser Gallery presented The Banksias in three exhibitions from 2013 to 2015 in association with Monash University Museum of Art, custodians of Rosser’s original watercolour paintings and the tapestry, Banksia Serrata, which was completed in 1995 by the Victorian Tapestry Workshop.

Rosser was appointed by the Vice Chancellor as Monash University Botanical Artist in 1974 and dedicated over twenty-five years to The Banksias. Painted at life-size scale she built the complex tonal qualities of Australia’s iconic wildflower layer by layer. Botanist William Stearn has described them as exquisite works of art, commenting that, ‘Their grace and accuracy entitle them to be placed alongside the superb Australian wildflower paintings of the great Ferdinand Bauer.’

Rosser has been recognised with an award for botanical illustration from the Linnean Society of London in 1977, the Order of Australia Medal in 1995 and an honorary PhD from Monash University in 1999. Fittingly, the most recently discovered species, Banksia rosserae, was named in her honour.