Seeing Voices used Monash University Museum of Art’s collection as a springboard for thinking through the voice and how it is visualised, employed and reimagined in works of contemporary art. In the exhibition, the voice opened onto a multiplicity of concepts. It acts as a metaphor for collective action; for speaking out against injustice and coming together in gestures of solidarity. It is a marker of cultural and geographic specificity; a medium for conditioned colloquialisms and the trace of disappearing language or dialect.

In this way, the voice can also function like a spiritual medium; through its recording and archiving it can time-travel, haunting the present as if a ghost from the past. The voice is also an index; a measure of position, perspective, distance and emotion. In private, in public, in conversation, on record—the voice connects our experiences with those of others.

The exhibition was comprised of works selected from the Monash University Collection along with several loans from Australian and international artists. They covered drawing, photography, painting, sculpture and print, creating a textured and layered environment of sound, scale, moving imagery and shape.

Artist Fayen d'Evie and her collaborator, sound artist Bryan Phillips, were invited to devise an audio tour of Seeing Voices as it was installed at the first venue, Horsham Regional Art Gallery, and which was available at all the tour venues. D’Evie’s broader interest in navigating visual art for non-normative vision was expressed in Myopic Voices, Echoing Horsham, 2017, with a close, myopic reading of the artworks and with descriptions of the experience of the body in the space. This was intercut with the voices of vision-impaired members of the Horsham community with whom the artists had run a workshop, the first of its kind for the Gallery.

Seeing Voices toured to six regional galleries throughout 2017–19. In addition to the exhibition, each venue hosted the presentation of a live work, either existing or newly conceived, by an artist from Australia or abroad. These artists were selected based on their interest in the voice and the desire to bring the immediacy of the live voice into the exhibition space.

Rosie Isaac and Aodhan Madden conducted an audio inhabitation of Rio Vista Historic House, adjacent to the Mildura Arts Centre. Hidden upstairs, they broadcast an elliptical narrative to replace the documentary video on the original occupants of the house, the Chaffey family, and their role in bringing irrigation and wealth to Mildura that loops in the drawing room downstairs and reverberates beyond. Invoking an imaginary child with memories of Rio Vista and swimming in the nearby Murray River, the narration filled the house and merged the volumes of its rooms with greater volumes of water.

Swedish artist Erik Bünger was represented in the exhibition with The Girl Who Never Was, 2014, an adaptation for video of one of his lecture performances. In Cairns, he delivered a more recent lecture, The Elephant Who Was a Rhinoceros, in which he linked the expressions in numerous languages that call upon certain animals precisely to keep them at bay—creatures of which one cannot speak—with language as a demarcation between humanity and creatures that cannot speak.

Continuing his work with digital assistants like Siri, Sean Dockray presented a Chorus at both Riddoch Art Gallery, Mount Gambier, and the Plimsoll Gallery in the School of Creative Arts, University of Tasmania, Hobart. While Apple engaged a single actor to provide the voice of Siri, Dockray made short recordings of multiple gallery visitors reading phrases selected from Uber’s driver contract that he then amalgamated into a digital voice that made periodic announcements in the galleries. 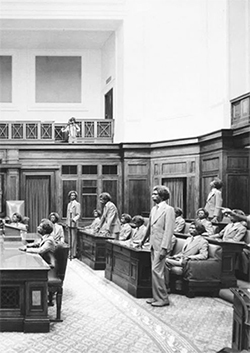 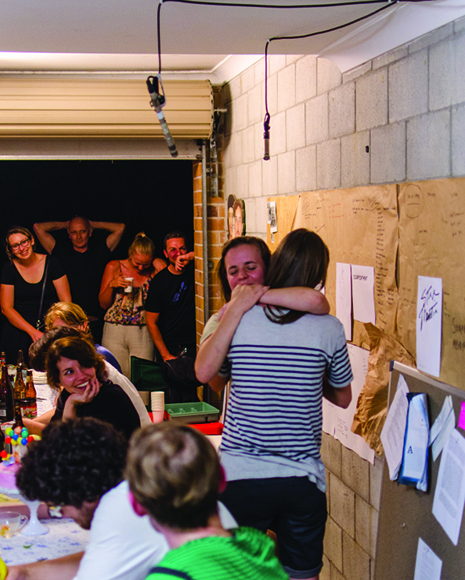