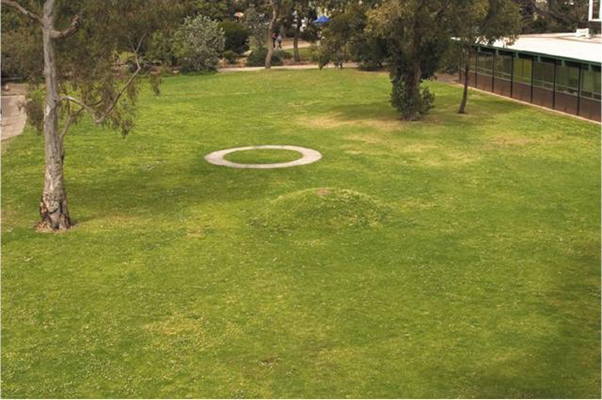 Clive Murray-White’s Retrospective 1993 is located on the Lemon Scented Lawn and is composed of two individual elements: a grassy mound and a concrete circle in close vicinity. The sculptures references an earlier work, Domes 1968, made by the artist and situated in the same position 25 years earlier until damage caused its removal. Domes, as the title suggests, comprised two ready-made aluminium shells, unabashedly resembling breasts. Its brazenness offended some staff on campus who campaigned vigorously, though unsuccessfully, for its removal. Retrospective references this earlier work and has become a favourite student lunch spot on campus. Murray-White’s Retrospective challenges the assumed conditions of viewing sculpture and encourages audiences to use the work as a vantage point itself to explore the surrounding environment.