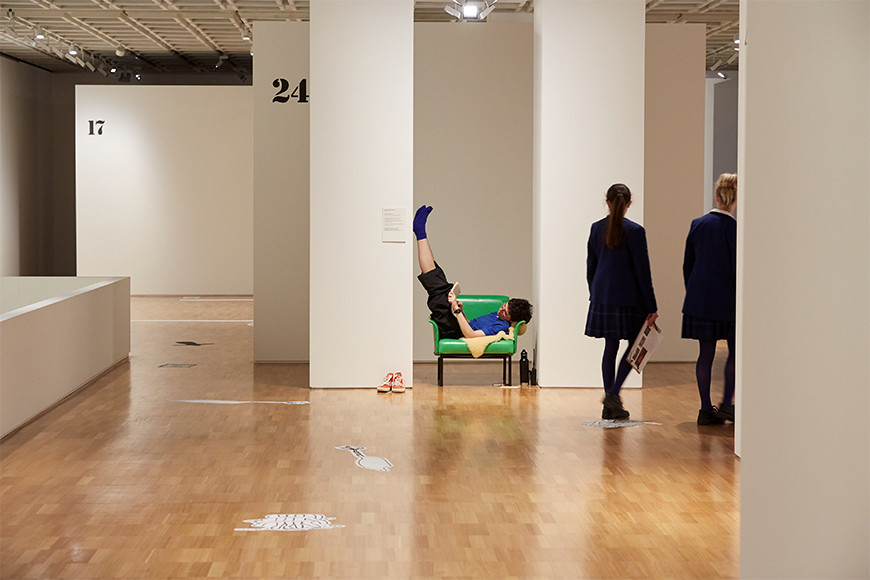 Session 1. Points of Tension: Presenting Work Within the Museum Space

Three artists—each working with choreography in distinct ways and regularly invited to work within the space of the gallery—share their experiences of presenting work of a choreographic nature within the white cube. Whether programmed as a commission, intervention, exhibition, performance or event, the works of these artists have challenged how museums produce and present art. In what way can institutions be more adaptable to artists whose work falls outside the modes of artmaking traditionally held in such institutions? How can artists learn to better navigate the institution and advocate for their practice? These case studies identify the points of tension between artist and museum, and suggest how they might be overcome.

Agatha Gothe-Snape is an artist whose practice spans improvised and procedural performance, and visual and public artworks. She has participated in numerous international exhibitions, including the 20th Biennale of Sydney, 2020, 12th Gwangju Biennale, 2018, and 8th Berlin Biennale for Contemporary Art, 2014, and she has exhibited at major Australian institutions including the Art Gallery of New South Wales, Sydney, National Gallery of Victoria, Melbourne, and Museum of Contemporary Art Australia, Sydney. In 2017, she produced performances for the Frieze London art fair and the Liveworks Festival, Sydney, and held a solo exhibition at the Mori Art Museum, Tokyo. In 2019, she had solo exhibitions at the Institute of Modern Art, Brisbane, and Perth Institute of Contemporary Arts. She has produced commissions for Kaldor Public Art Projects, including for Making Art Public: 50 Years of Kaldor Public Art Projects in 2019–20, and this year Monash University Museum of Art held a major survey of her work. Gothe-Snape has produced public art for Monash University and for the Sydney Biennale Legacy Artwork commission, and has upcoming public art commissions for the centre of Sydney. Gothe-Snape is actively involved in Wrong Solo, a collaborative performance group, with artist Brian Fuata.

Amrita Hepi is a Bundjulung and Ngāpuhi artist working with dance and choreography through video, the social function of performance spaces, installation and objects. Utilising hybridity and the extension of choreographic or performative practices, Hepi creates work that considers the body’s relationship to personal histories and the archive. Her practice engages in a wide range of themes including the ourbouros, the ‘itness’ of a thing, violence, magpies, magic, touch, doom, spectacle, the idea of ‘make-believe’ and the uncanny. She is currently an artistic advisor to the Council of Good Ideas for Rising (formerly Melbourne Festival), a Gertrude Contemporary artist in residence and is working with Kaldor Projects/Serpentine UK as a participating DOit artist. In 2019, she was a commissioned artist for The National: New Australian Art 2019 and the recipient of a dance web scholarship to be mentored by Anne Juren, Mette Ingvarsten and Annie Dorsen. In 2018, and again in 2020, she was the recipient of the people's choice award for the Keir Choreographic award and was also named one of Forbes Asia 30 under 30. Amrita trained at NAISDA Dance College in Kariong, NSW, and Alvin Ailey, NY.

Latai Taumoepeau makes live art. Her body-centred performance practice of faivā (performing art) is from her homelands: the Island Kingdom of Tonga and her birthplace Sydney, land of the Gadigal people. It centres Tongan philosophies of relational space and time, cross-pollinating ancient and everyday temporal practice to make visible the impact of climate crisis in the Pacific. Taumoepeau engages in the socio-political landscape of Australia with sensibilities in race, class and the female body politic, and is committed to making minority communities visible in the frangipanni-less foreground. Taumoepeau has presented works and performed nationally and internationally, including: Sydney Festival; Tanz Im August, Berlin; 9th Asia Pacific Triennial, Brisbane; Dance Massive, Melbourne; NIRIN Biennale of Sydney; SPILL Festival, London; Hong Kong Art Central; Carriageworks, Sydney; Performance Space, Sydney; Sydney Opera House; Blacktown Arts Centre, Sydney; 4A Centre for Contemporary Asian Art, Sydney; Campbelltown Arts Centre, Sydney; and Australian Museum Canberra. She is currently working with Arts House, Melbourne, on the five-year project REFUGE, an artist-led community preparedness program in collaboration with Emergency Management Victoria and many stakeholders. Additional to Taumoepeau’s artistic practice, she has worked for Playwriting Australia and Radio Skid Row, a community radio station in Sydney engaging communities in creative digital media projects that were under-represented in mainstream media. In the near future, Taumoepeau will return to her ancestral home and continue the ultimate faivā of sea voyaging and celestial navigation before she becomes an ancestor.

Hannah Mathews is Senior Curator at Monash University Museum of Art (MUMA) and has held curatorial positions at the Australian Centre for Contemporary Art, Perth Institute of Contemporary Arts, Next Wave Festival, The South Project, Ian Potter Museum of Art and Biennale of Sydney. Her recent curatorial projects include Agatha Gothe-Snape: The Outcome is Certain, MUMA, Melbourne, 2020; Shapes of Knowledge, MUMA, 2019; The humours, MUMA, 2017; Ulla von Brandenburg: It has a Golden Yellow Sun and an Elderly Grey Moon, ACCA, Melbourne, 2016; and Framed Movements, ACCA and Melbourne Festival, 2014. In 2013, Hannah initiated Sharing Space, an occasional program that engages with choreography and the visual arts. To date this program has presented a seminar with Andre Lepecki; a workshop and publication focused on notation across disciplines; a writing workshop with RealTime and the Next Wave Festival; Action/Response, a two-night cross-disciplinary program for the 2013 Dance Massive Festival; a workshop and performance of Yvonne Rainer’s Trio A in Perth, Melbourne and Sydney, and Trisha Brown’s Early Works in Melbourne. Her book To Note: Notation Across Disciplines won the inaugural Cornish Family Prize in 2017.

Precarious Movements: Choreography and the Museum is a research project led by a group of independent artists, curators, conservators, and academics affiliated with UNSW, AGNSW, MUMA, NGV and Tate.