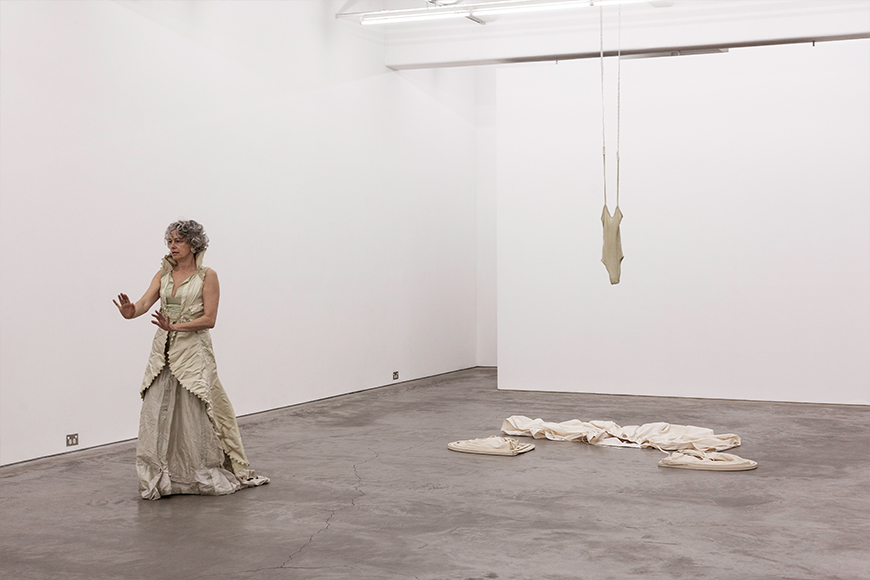 There is a notable absence of choreographic works in museum collections. An obstacle seem to exist at the most fundamental level—the very way museums understand the art object and structure the process of collecting. This session looks at how artists and institutions are confronting the limitations of current acquisition frameworks and are considering ways in which collections might make space for living practice and immaterial context. Shelley Lasica and Tania Doropoulos look to Lasica’s work Dress: A Costumed Performance with Designer Martin Grant, 1998–2019, as a model for how artists might approach the acquisition of their work. Artist Victoria Hunt discusses her experiences within institutional contexts, reflecting on how museum ontologies and temporalities might be challenged and changed. And curator Lisa Catt discusses how the archive might circumvent institutional hierarchies and dependencies on objecthood to represent a wider range of artforms within a museum collection.

Lisa Catt is Assistant Curator, International Art at the Art Gallery of NSW where has curated and co-curated  exhibitions including Get Arted: Pat Larter, 2020; The Belonging Project, 2019; Here We Are, 2019; Yona Lee: In Transit, 2018; Spacemakers and Roomshakers: Installations from the Collection, 2018; Eko Nugroho: Lot lost, 2016, and Julian Rosefeldt: Manifesto, 2016. Catt also worked closely with artistic director Mami Kataoka on a display of the Biennale of Sydney archives for the Gallery’s presentation of the 21st Biennale of Sydney (2018). Supported by The Andrew W Mellon Foundation, in 2017 Catt was awarded a place at a week -long workshop at the Museum of Modern Art, New York that focused on the management of time-based media artworks in collections. She is interested in performative and interdisciplinary art practices, advocating for new ways of working and thinking within the museum to support contemporary art in all its forms.

Tania Doropoulos is the Director of Anna Schwartz Gallery. She was the inaugural Curator of Anna Schwartz Gallery Carriageworks before relocating to London to undertake graduate research. She was Director of Exhibitions at Timothy Taylor and a member of the international committee of Art Brussels, before joining Frieze, initially as interim Artistic Director, Frieze London, and then Director of Frieze Studios. In 2009, she was the Coordinating Curator of the Australian Pavilion at the Venice Biennale. She has edited numerous publications for artists including Alex Katz, Simon Hantaï, Sean Scully, Eddie Martinez, Josephine Meckseper and Shaun Gladwell.

Victoria Hunt was born on Yugambeh Country, Surfers Paradise, Queensland. She currently lives on the unceded lands of the Gadigal people of the Eora Nation (Sydney). Hunt is a queer interdisciplinary Indigenous-Maori artist working as a dancer, director, choreographer, performance installation artist, photographer, filmmaker and Body Weather practitioner. Victoria moves inbetween numerous educational and heritage institutions. Hunt’s ancestral affiliations are with Te Arawa, Ngāti Kahungunu, Rongowhakaata, English, Irish and Finnish. She works to reinstate the power of Indigenous creativity through unravelling the complexities Indigenous people face within the politics of recognition, respect, responsibility, rematriation and remembrance. Central to this is the honouring of whakapapa (ancestral lineages) and the revitalisation of Mana Wahine and Atua Wahine knowledge and practices (Maori feminism, feminine knowledges). Since 2000, Hunt has worked with Body Weather pioneer Tess de Quincey as a founding member of De Quincey Co. Her most recent work TANGI WAI… the cry of water premiered at Liveworks Festival, Sydney, 2015, and Dance Massive, Melbourne, 2017, to critical acclaim. Her collaborative dance solo COPPER PROMISES: Hinemihi Haka premiered at Liveworks Festival in 2012 then toured onto the UK, America and Canada. She was one of six artists featured in the 1st edition of BAC Madrid: Biennale of the Arts of the Body, Image and Movement, 2019–21. Hunt is currently supporting a number of youths and emerging and established artists to develop their body-based hybrid performance practices.

Shelley Lasica has pushed the confines of dance, choreography and performance over three decades. Her practice is defined by an enduring interest in the context and situations of presenting choreography. Throughout her career, she has been making solo performances that function as a mechanism and a commentary in making work. This practice provides the basis for generating ensemble works with a network of dance artists that question the collaborative and interdisciplinary possibilities of choreography. Lasica regularly collaborates with visual artists, including Tony Clark, Helen Grogan, Anne Marie May, Callum Morton and Kathy Temin, in order to create dialogues between different modes and means of presentation. She has also contributed to the work of artists including Bridie Lunney, Fayen d’Evie and Fiona Macdonald. Her choreographic works have been shown nationally and internationally within both visual art and theatre contexts, including: Melbourne Festival; National Gallery of Victoria, Melbourne; Chunky Move, Melbourne; Artspace, Sydney; Centre Nationale de la Danse, Paris; Siobhan Davies Studios, London; Dance Massive, Melbourne; Australian Centre for Contemporary Art, Melbourne; Murray White Room, Melbourne; Neon Parc, Melbourne; and Anna Schwartz Gallery, Melbourne.

Pip Wallis is Curator of Contemporary Art at the National Gallery of Victoria where she has organised exhibitions by Helen Maudsley and Hito Steyerl, performances by Adam Linder and Simone Forti, and published on the collection. Wallis sits on the Exhibitions Committee of West Space and 1856, and is a member of Matter in Flux. She was previously Managing Editor, X-TRA Contemporary Art Quarterly,Los Angeles; Curator in Residence, Chisenhale Gallery, London; and Curator, Gertrude Contemporary, Melbourne.

Precarious Movements: Choreography and the Museum is a research project led by a group of independent artists, curators, conservators, and academics affiliated with UNSW, AGNSW, MUMA, NGV and Tate.