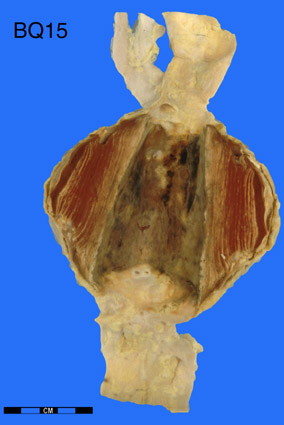 This 70 year old man with a past history of mild gastro-oesophageal reflux presented to the Alfred Hospital with a sudden onset of severe upper abdominal pain which radiated to the left shoulder tip. On examination he was distressed and hyperventilating, pulse 87/min. and blood pressure 140/90 mm Hg. Abdominal examination revealed board-like rigidity and diminished bowel sounds. At emergency laparotomy no evidence of a ruptured viscus was found; the pancreas appeared normal and an unruptured abdominal aortic aneurism was noted. Endoscopy on the following day showed a ruptured oesophageal ulcer and a Celestin tube was inserted. The patient developed localised infective complications, pulmonary oedema and congestion and died 19 days after admission.

The specimen consists of lower abdominal segment of aorta together with common iliac vessels and proximal portions of the internal and external iliac arteries. A large 10 x 7 cm aneurism is situated below the origin of the renal arteries extending to the aortic bifurcation. The aneurism is partly lined by laminated thrombus and there is evidence of recent thrombus on the luminal surface. There also appears to be some aneurismal dilatation of the common iliac and (opened) proximal left external iliac artery. The abdominal aorta at the upper end of the specimen shows multiple focally ulcerated atheromatous plaques. There is no evidence of rupture.