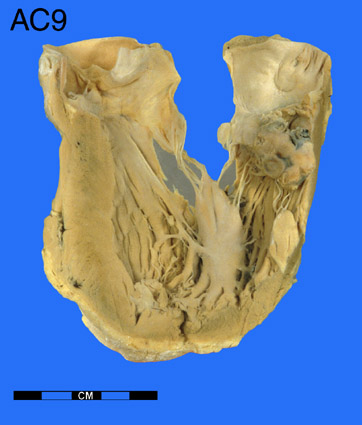 This 18 year old male had a past history of rheumatic fever and diphtheria as a boy. Three weeks prior to admission he suffered severe rigours followed by weakness and headache. He was seen by a doctor at the time when his temperature was 40_C and it was thought that he had influenza. There was some improvement after this time but the temperature again rose and he became delirious. On examination, febrile, sick-looking youth. Heart appeared to be normal, spleen was not palpable and bilateral clonus was present at the knees and ankles. There were splinter haemorrhages beneath the nails and a petechial rash on the back. Blood culture grew Corynebacterium diphtheriae. At first these were mistaken for diphtheroids. Despite administration of diphtheria antitoxin there was steady deterioration and death.

Specimen is of a left ventricle dissected to display the mitral valve. The left ventricular wall is hypertrophied. The medial cusp on the right of the specimen shows a large 2 x 1.5 cm ovoid vegetation which is of recent origin. There has been partial ulcerative destruction of the cusp associated with this vegetation. Approximately 1/3 of the cusp and the associated chordae tendinae have been disrupted. The remaining portion of the mitral valve and the aortic cusps appear to be slightly thickened. This is a rare case of acute bacterial endocarditis due to Corynebacterium diphtheriae. It is not known how the organism gained entry into the body. There was no immediate preceding attack of diphtheria. The bacillus in culture did not produce toxin.