Amyloidosis of The Heart 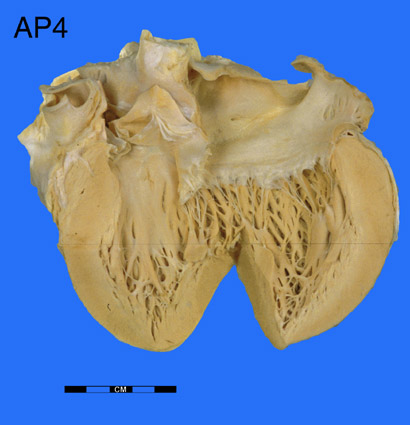 This 44 year old male presented with a 3-year history of increasing listlessness and lethargy. Examination revealed little but hypotension. The patient was exhaustively investigated and in the ward experienced occasional pyrexial episodes associated with a sore, inflamed throat. The serum proteins were raised, particularly the alpha globulin. He was discharged as a questionable case of multiple myelomatosis. Re-admission followed 3 months later with a story of blackouts and of dyspnoea on exertion. Examination revealed a husky- voiced, pale, hypotensive male with questionable signs of congestive failure and some chest signs. The cause of the failure was not explicable. In the ward, the patient developed a right hemiplegia and albuminuria. The patient was found dead in bed.

The specimen is of heart laid open to display the atrial and ventricular cavities and the associated valvular system on the left. The left ventricle is hypertrophied and dilated. Myocardium is paler than usual and has a waxy appearance. The valves and pericardium appear normal and the sectioned coronary vessels show some atheromatous deposition. Histological examination revealed extensive amyloid infiltration in the connective tissue between the compressed cardiac muscle bundles. This is, therefore, a case of primary amyloidosis.